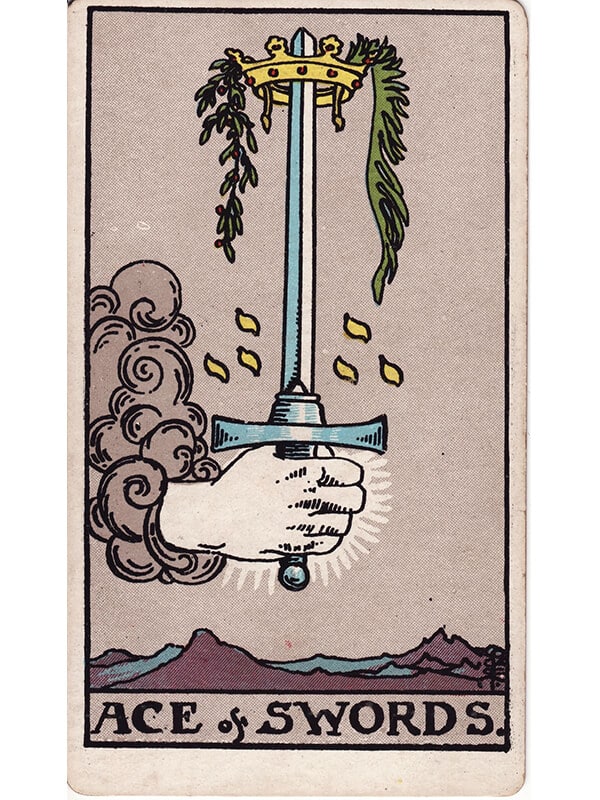 The four minor arcana suits all represent a particular aspect and element in the tarot. While that element is represented in every card of the suit, the four aces embody the purest form of these elements and meanings. When you draw an ace in a tarot spread, you know that this suit is particularly relevant to the reading.

The material paragon of the immaterial mind, the Ace of Sword uses masculine energy and global knowledge to strengthen the mind and make it strong. This should be seen as an inclusive message telling everyone acting on their impulses and needs without thinking about the consequences that they should take some time to take a step back and look at any situation from another angle.

The reason and a solid plan will usually lead the Querent to victory, but when the card is reversed it usually means that something has to be done to avoid a serious mistake.

The Ace of Swords Upright Meaning

The suit of swords embodies the preeminence of the mind over other elements in the Querent’s life, the use of intellect and reason, and masculine energy. The Ace of Swords meaning is the embodiment of these concepts in a tarot reading.

The presence of the Ace of Swords in a tarot reading could adequately be summed up in the idiom “mind over matter”. It usually appears when the Querent is making an obvious effort to lead their life in a reasoned and logical manner rather than blindly following the whims of fate, or even their own desires and reflexive actions.

Beyond logic, intellect, and reason, the presence of the Ace of Swords in a tarot reading could also refer to any project or process requiring a deliberate and detailed plan, structure, or guidelines to avoid as many mistakes and outside problems as possible.

In the suit of Swords, the Ace can also represent any positive aspect where the mind has to play a crucial part, like communication skills, knowledge, or the objective use of justice, weighing pros and cons in a neutral way to provide a fair sentence (literally or figuratively).

The suit of swords is quite an unusual sight in a love-based spread or in a love tarot reading. Indeed, love is a raw emotion that is usually quite hard to handle properly, and letting your mind be 100% in charge when it appears is not as easy as it sounds.

Sword cards (and especially the Ace of Swords) can represent a conscious effort to bring some balance in a couple where everyone has drifted away, and make logical decisions together instead of blindly following their passion. Combined with the Ace of Wands, it might represent great efforts and commitment from both sides of the equation to build a stronger future together.

But you should keep an eye out for a reversed Ace of Swords in a love tarot reading, because it is usually a sign that communication has been broken or that trust has been breached, with potentially dire consequences for the relationship itself.

Regardless of your current stage of development, the Ace of Swords represents making a decision using logic, hopefully, one that will advance your education, job, or career.

If you are a student and this is your card, then you need to make an important decision regarding your education pathway. Maybe you need to revisit your thinking about your major area of study? Or, you discover new thoughts because of your studies?

If you are doing work that is necessary, but not a career, then you need to speak up about a work issue, share a new idea, or initiate some conversations among your co-workers or with your supervisor. What are some thoughts that need to come out and be shared?

If you are in your career, then the Ace of Swords represents the need to think about new ideas for your career path. This card indicates an excellent time to look at professional development and pursuit of new knowledge to help you keep evolving.

The Ace of Swords Reversed Meaning

As usual, when an ace from one of the minor arcana suits appears reversed in a reading, this is usually a bad sign or a warning, and the actual meaning is almost always a twisted version of the universal values embodied by that suit.

Consequently, a reversed Ace of Swords will highlight moments where the mind can be wrong, like faulty logic or false information used to draw conclusions that will be just as false, as a consequence. In a legal matter, it could represent a deeply unfair verdict or a corrupt judge or jury. More globally, it is also an obstacle to the path of effective communication, taking words out of context, and twisting their meaning in serious ways.

Reversed, this card indicates that now is not the time to decide. You need more time to review the situation and gather more information. Making a hasty decision or being impatient would not serve you well in your relationship. Be patient and observe.

When this card appears reversed in a question about school, work, or career, then you need to keep on the path that is familiar for a while longer. You do not need to make any decisions right now and you may have to resist choices others want you to make because you know it is not the right time to decide. Keep your own council and observe what is going on around you.