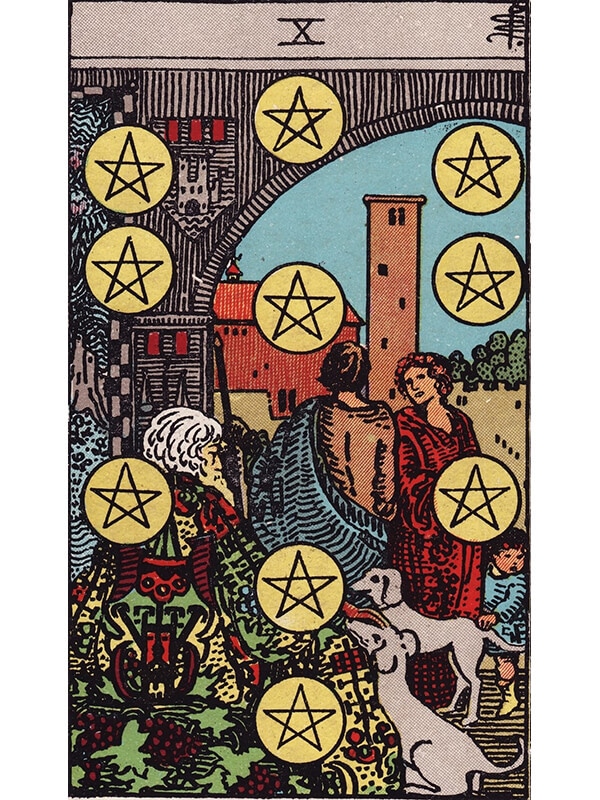 The final numbered card in the suit of Pentacles represents the pinnacle of what the element of Earth has to offer, a rock-solid foundation where the family can grow, a source of love and companionship that can support one another, safe from most financial woes by some shared wealth and long-term planning.

The implications of the Ten of Pentacles are strong and far-reaching, as evidenced by the pattern of the Kabbalistic tree of life appearing in the card’s illustration. This minor arcana card wants to provide long-lasting harmony to the Querent or subject of the reading, and if the current situation is too far away from this ideal state of balance and harmony, the rest of the drawing will usually provide clues and advice meant to slowly guide that person toward their ultimate goal.

The last of the numbered cards in the suit of Pentacles, the scene illustrated on the Rider Waite Smith tarot deck is extremely dense and busy. There are several men and women on the card, which seems to be a middle-aged couple, one child, and an old man sitting in the foreground.

In this minor arcana, the ten pentacles on the card are indeed displayed all over the place without any real thematic connection to the scene itself, but any person who has ever read about Kabbalah will easily recognize that the ten pentacles are displayed in a pattern that matches the locations of the sephiroth on the traditional representation of the tree of life.

All the various characters in the picture are the various elements that make a family. This blood connection and the kind of emotional safety net provided by this closely bound group is fascinating and scary at the same time.

But family offers a nucleus and a strong foundation on which any other endeavor will be built. In a way, like several other cards in the suit of Pentacles, the Ten of Pentacles also represents wealth, but here the true value and wealth do not depend on shiny items or a stuffed bank abound,

People the Querent particularly cares for, like their close friends or confidantes, can also be covered by this concept of family. An extended family is a family too, and they can be just as important as blood ties, and more often than not they are also stronger.

An upright Ten of Pentacles in a love-based reading or tarot spread is extremely positive, turning love into something long-term and far-reaching. This minor arcana card, in this context, represents the moment when a simple couple turns into a family. It might represent the arrival of the first child, or a marriage proposal, or basically, anything that might solidify the ties between the various members of the family is obviously good luck.

Career encompasses school and education if that is your current stage; work that is necessary, but not what you would consider a career path; and your actual career path. Regardless of your current stage of development, the Ten of Pentacles represents the highest material achievement.

If you are a student and this is your card, then you want to be sure you are standing out in class and in your studies. This card can represent awards, accolades, and favoritism through hard work. Your instructors and some classmates can form a family that could provide you with plenty of support once you get out into the working world.

If you are doing work that is necessary, but not a career, then there is a good chance you are in a company that is doing very well and you are “part of the family” and reaping the financial rewards. If you put in plenty of hard work, you will get plenty of rewards. The company is well-managed and you should be grateful. If not, time to look for new work.

If you are in your career, then the Ten of Pentacles represents the network of people who contribute to your success. It takes many people working hard to attain true wealth; no one does it alone. You may be the leader of the wealth, but make sure you acknowledge everyone that contributes, which will only increase your great status.

The negative side of the Ten of Pentacles appears when the card is drawn reversed in a tarot spread or during a reading. The core element of this darker side represents the same family ties as on the upright side, but when they are breaking down. It might be due to some family feud or simply due to someone moving away and slowly eroding the amount of complicity and osmosis they have together.

Reversed, this card indicates false status, living a life borrowed from the future through debt. If this situation is the case, then you should take this card as a warning that a hollow financial situation will likely ruin your relationship. You may not be able to attain the upright value of this card if you do not address its reversed meaning now.

When this card appears reversed in a question about school, work, or career, then you face a serious setback right near the end of the effort, rather like tripping just before you reach the finish line. You want to make sure you have reviewed everything before you make a final push to completion; stay focused until the very end!