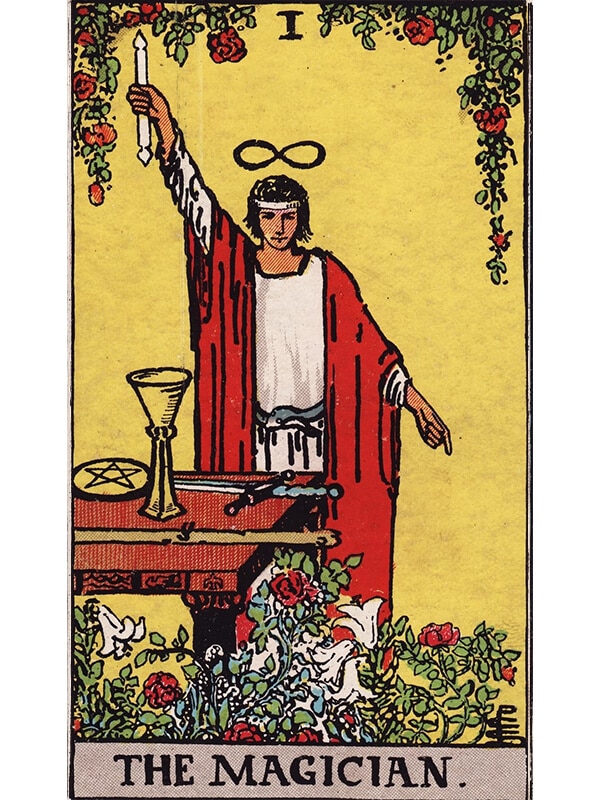 The magician tarot card comes from humbler roots. In many ancient variations of the major arcana cards, this is not a real Magician but an illusionist, the famous Marseille deck even names it “The Mountebank”. Occult studies in the nineteenth century, mainly in the United Kingdom, altered the magician tarot card meaning to turn it into a full-fledged mage wielding occult powers and having secret knowledge about many things.

Astrologically, the Magician is associated with the planet Mercury.

The meaning of the Magician tarot card can vary, but the most common reading is a notion of skill. Someone who has displayed vast amounts of knowledge and has the ability to use it.

In some other major arcana meanings, the Magician can also represent someone full of self-confidence, someone bold and courageous in a positive aspect, or someone who can become vain and haughty if surrounded with more negative cards. Regardless, in both cases, there is an element of strong willpower surrounding this card.

It should also be noted that in some readings, especially among initiatory orders, the Magician tarot card could represent the Querent (the person who receives the tarot reading) if that person is male.

The number 01 card of the Major Arcana, the Magician, represents significant choices, decisions, and moments at crossroads and the beginning of a journey. What have been your “destined” moments in your relationship(s) journey that have been definitive, either for a choice you made or a circumstance you could not avoid (a choice made by someone else that affected you)?

If you are single, this card will ask you how you plan to ask someone out and initiate new contact. How will you choose to respond if someone initiates contact with you? It may be “fate” that puts you in someone’s path, but it will be free will if you decide to pass that person by or go on a relationship journey with them. What are your choices now, that are most important, regarding being single, staying single, or getting out of being single?

If you are in a relationship, this card encourages you to look at the important and key moments of initiation that have brought you to your current situation. What were they and how do you feel about them? Would you make different choices or the same ones? As you move forward, what are the most pressing choices you face and where do you want to go, in the relationship, after you make the choice? If you are on the receiving end of someone else’s choices, how do you want to choose to react?

Regardless of your current stage of development, the Magician represents decision-making with regard to school, a job, or your career path.

If you are a student and this is your card, then you need to assess where you are in your academic decision-making process. Perhaps you are trying to decide if you will go to college or not, which colleges to apply to if you are, to pursue financial aid or not, select your major, join a club, and many, many more important choices.

If you are working, but not doing something you would consider a career, then this card will encourage you to think about the choices available to you regarding your work situation. Have you actually chosen your work to keep your choices limited and enjoy a certain satisfying consistency that brings you the pleasure of security? Or, have you trapped yourself in a mundane routine that is leaving you feeling stagnant? Is now the time to choose to look for new work or simply appreciate the work you have because you made good choices to get where you are?

If you are in a career path, then this card reveals the need to make an important decision regarding the next steps in your career journey that may have especially far-reaching consequences. If you are a leader in your field, you may have to make some choices that greatly affect those who are following you. Finding a career direction and being great at what you do can create more opportunities for initiation and creativity, leading to more complete and satisfying life experience.

When the Magician card is reversed, there are mainly two commonly accepted ways to understand it. It can either represent an outside element gifted with practical knowledge, like a Physician or a Magus, or it can be a sign of some illness, particularly where the mind could be affected. In that later understanding, it could be as banal as a simple headache, or it could forecast something more serious that might turn into genuine mental illness.

If you have any doubts about it, do not hesitate to check your own mental health by consulting an appropriate expert. Better safe than sorry.

You need to look carefully at your decisions regarding your relationship or your pursuit of one. It is very possible that you are being misled or you are deceiving yourself and you need to step back and take some time away to see the situation more clearly. You might do well to consult with a friend, family member, or mental health professional. Reversed cards most often offer us a warning, which we should heed.

When this card appears in a question about work or career, then there may be some external problem that will require you to make a difficult decision or deal with a decision that has been forced on you. If you are coming up for review, signing a contract, or dealing with a work issue that is taking your time and energy, be careful. To not be foolishly trustworthy or naïve. You might also want to brush up your resume and quietly look at your market value. Keep your thoughts to yourself and do not engage in any conversations that could “come back to bite you”.

In the story told through the major arcana tarot cards, the Magician is one of the first characters that the Fool meets on his journey. It represents one of the two balancing forces of the universe. In this story, the Magician tarot card represents the active power of creative impulse, often seen as full of masculine energy.

Just like the Magician teaches that lesson to the Fool, this Arcanum is meant to let you learn how to have a lasting impact on the world by focusing your willpower and improving your concentration.

Most of the modern decks since the late 19th century represent the Magician as some sort of confident person, usually a middle-aged man, wielding or somehow in possession of various traditional magical tools that represent the four suits of the minor arcana (a cup, a sword, a wand, and a pentacle or a coin). Older depictions of the Magician, especially in early European decks, still have this symbolism of the four minor arcana suits but the protagonist is more often depicted almost as a charlatan or illusionist.

In the most current decks, artists and collaborators deviate significantly from the traditional image, while others mimic the Rider-Waite art.

Meditating with the Magician

The magician tarot card is a great focus for meditation. Indeed, the strong willpower energy and meaning held within this major arcana card echoes the sharp clear-headedness required for a successful meditation. This will help you collect your thoughts and hone your will like a sharp sword. You will get out of this meditation with more determination and drive, ready to take on the world.

This is also a great focus for any meditation aiming to improve your intellect, usually on an academic level. If you are currently learning something or about to pass an important exam, the magician tarot card can help you and make sure that you will be at the top of your game!