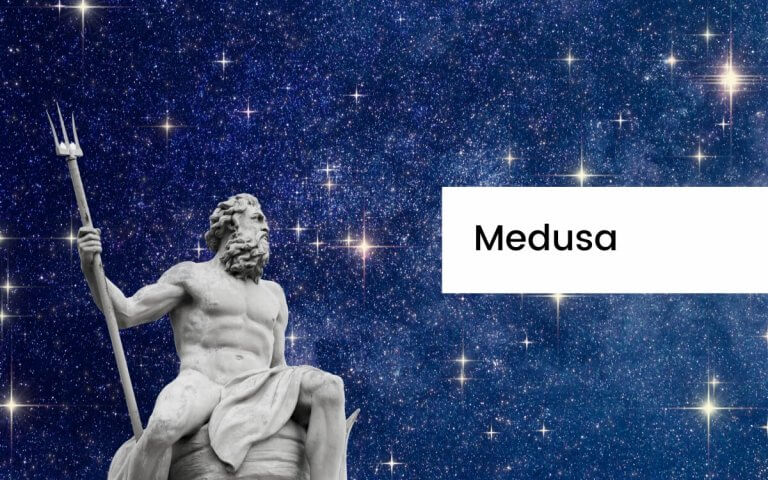 Let us dive into the story of Medusa from Greek Mythology and the aspect of the asteroid in Astrology.

The Story of Medusa

Medusa was the only Mortal daughter among three sisters. They were known as ‘the Gorgons’, a word meaning ‘fierce, terrible and grim’. In other words, they were monsters.

Medusa’s name when translated means ‘to guard or protect’.

Medusa was incredibly powerful. Her fierceness and attractiveness could be described as beautiful or hideous depending on different interpretations of mythology and societal attitudes at the time.

Medusa worked for Athena, who was a God.

Originally, Medusa had many aspiring suitors; but after being raped by Poseidon (otherwise known as Neptune) in Athena’s temple, Athena was enraged. As a result, she transformed Medusa’s hair into serpents and made her face terrifying enough to turn people into stone by looking their way.

She was serpent-like, with wings, claws, gnashing teeth and a vibrating tongue.

Being raped turned her into an object to be punished, according to the rules of the land at the time.

Perseus was the son of Zeus and Danae.

Danae’s father was the King of Argos.

Zeus was king of the Titans.

It was foretold to Perseus’ grandfather that once born; Perseus would kill him. To prevent this, before Perseus was born the King locked Danae away in a bronze chamber. Zeus transformed into a shower of gold and impregnated her anyway.

For want of not provoking Zeus, Danae’s father hurled his daughter and Grandson in a wooden chest into the sea.

They were rescued by Dictys – who brought up Perseus.

When he reached adulthood Dictys’ brother (The King) fell in love with Danae. Perseus wasn’t happy about this as he was very protective of his mother.

To throw Perseus off course, and to try to marry his mother anyway- Dictys’ brother threw a banquet and pretended he was going to get married to a horse tamer. He requested that all guests bring horses as gifts, knowing that Perseus did not have one.

When Perseus confessed, he had no horse, he offered any gift that the ‘groom’ would name. Dictys’ brother seized his opportunity to get rid of Perseus and sent him on a life-threatening quest to bring him the head of the only mortal Gorgan. Medusa.

On his return, Perseus was furious with the trickery which led him on this dangerous quest. He turned Dicty’s brother into the stone using Medusa’s head. He then gave the Kingdom to Dicty’s and gave the head of Medusa to Athena. Athena adorned her shield and breastplate with it for protection as an ‘evil averting device’.

Other than being a little bit vain she didn’t really do anything wrong. She suffered a lot regardless and in death, her powers were taken advantage of. In life, they were feared.

In Astrology, Medusa is an asteroid. She can be found in your natal chart.

She represents where in life you pay for your bad choices, and where you can keep making the same mistake over and over again if you don’t learn the first time.

Medusa can also show where you can pay for the bad choices that weren’t necessarily your fault.  She can represent insecurities, and why you may loathe yourself from time to time.

Those with a prominent medusa in their chart may have a very clear purpose to go through life in search of the truth. If you can look at the truth without fear, you have conquered, much like Medusa could.