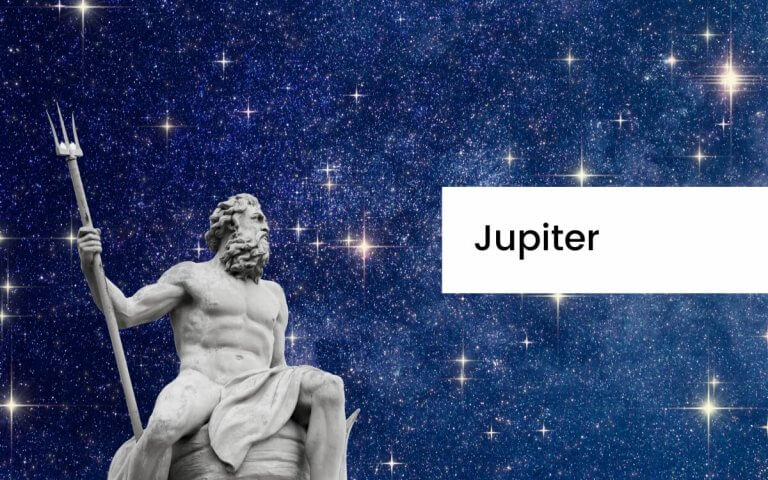 In Greek Mythology, the equivalent figure of Jupiter is a god called Zeus. Let us dive into the connection between Jupiter and Zeus.

The Story of Zeus

Zeus was first of the Gods, he was the ‘God of Gods’ and as you have probably already gathered, he is probably the most prominent God in all of Greek mythology.

The first story he is involved in is the story of Saturn, in which he overthrew his father and saved all his siblings- who had been swallowed by his father to prevent being overthrown.

He is God of the sky and controls the weather, namely lightning, and thunder. He is said to use these weather powers as a weapon.

He is King of Mount Olympus (home of the Greek Gods, which Hermes acted as a messenger for)- and he basically runs things in Greek Mythology. He achieved this status at the admiration of his siblings when he saved them all and brought them into the world by causing his father to regurgitate them.

He ruled alongside two of his siblings, Hades (Pluto) and Poseidon (Neptune).

Zeus had many lovers but was married to Hera (Goddess of marriage and monogamy). His unfaithfulness drove her to great jealousy- especially as he would severely punish anybody who acted on their affections for his wife.

Zeus was responsible for keeping peace in the Kingdom and solving conflicts. Bringing about justice was his main role. He is described as being very wise and fair, as you would have to be in such a role; but he was also known as fun-loving and was known to have a temper. He was unpredictable in that sense.

In astrology, Jupiter is the planet of expansion, higher learning, and long-distance travel. It’s also the planet of luck and good fortune.

Jupiter wants to give gifts and blessings, but they must be earned through the evolution of character and growth of the soul. The gifts of Jupiter may not be easy to earn. I think of Jupiter as the planet that dangles a carrot in front of you and goes ‘look at what you could have’- showing you all your dreams coming true, then trying you and making you work your butt off to go and get it.

When Jupiter is in retrograde- you are very much tested by obstacles and ‘character building’ circumstances. When a retrograde end the payoff will be in accordance with how much you have worked and stayed focused on your goals.

It is a very intellectual and spiritual planet.

In your chart, your Jupiter will show you how you tend to take care of yourself and recover from emotional setbacks. It can also indicate what type of therapy seems to work best for you in helping you cope. It is telling of the ways that will best suit you in obtaining/maintaining good health over time.

The Trigrams that Make up the Hexagrams in the I Ching