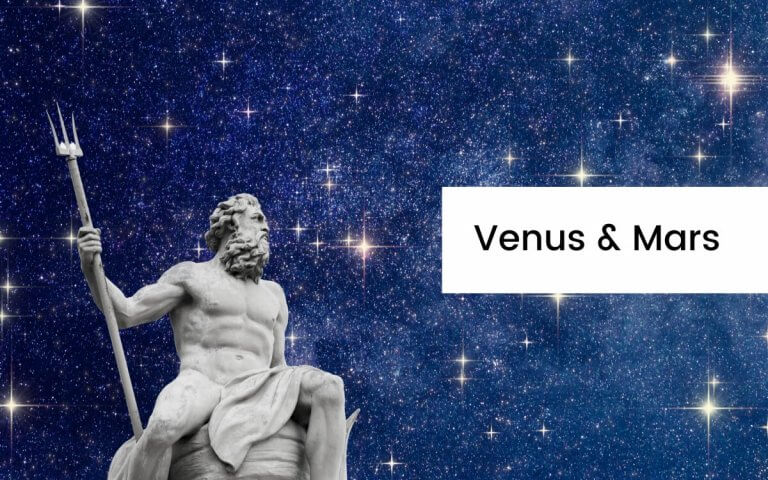 In Greek Mythology, the equivalent figure of Venus is a goddess called Aphrodite. Mars is represented by Ares.

Aphrodite in Greek Mythology was considered the embodiment of the virgin, the mother, and the unmarried crone. It doesn’t make sense for her to represent all three logistically but the great thing about Greek Mythology is that there is no logic. She was overall a symbol of the feminine energy.

She was the daughter of Uranus and was born from her father’s genitals after Saturn (her Grandfather) discarded them in the sea. As well as being the Goddess of beauty, fertility, and love, she was honored as a Goddess of war.

Because of her unusual birth and the way she seemingly emerged from the sea, Aphrodite carried an air of mystery about her. She was described as enchanting and alluring.

Aphrodite is not involved in many ‘dramatic’ stories of Greek Mythology. She is mainly involved in ‘beauty pageant’ like stories.

Though Aphrodite had a husband (Hephaestus- a blacksmith who wasn’t well suited to her) she had many lovers. Zeus paired the married couple to prevent people from fighting over her.

In astrology, in simple terms, your Venus represents the type of aesthetic you are attracted to.

What trait you like, what appeals to you in life, what brings you pleasure and a sense of contentment. What you like in relationships and people, what your social style is.

In Greek Mythology, Venus and Mars (Aphrodite and Ares) were lovers. Aphrodite was married to Ares’s brother at the time.

Ares is representative of Aries in the Zodiac.

He was the son of Zeus (Saturn) and Hera. He represents the masculine aspects of war- forward charging violent action, as opposed to a strategy which is the other important aspect of war. He was generally a more unpopular God, as he was considered to be very hateful.

He isn’t included in many stories of Greek Mythology, but his character is telling enough for him to be an important representative in astrology.

Mars is the planet of drive, energy, action, and desire. It’s representative of a person’s ego, survival instinct, and general animalistic tendencies.

Our sexual desires come under the rule of mars as opposed to our romantic desires- which are more ruled by Venus.

In your chart, Mars represents how we express our anger, what our first instincts and impulses are when responding to anger- and what makes us angry.