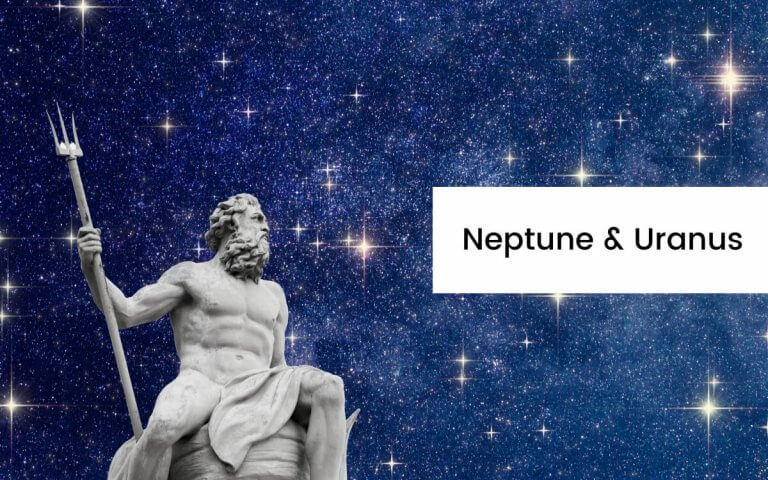 In Greek Mythology, the equivalent figure of Saturn is Cronus. Pluto is represented by Hades.

The Story of Poseidon

Poseidon was the God of the Sea, earthquakes, and horses.

He’s recognized as the personification of the sea and his name translates to ‘husband’ or ‘lord’ of the earth.

Probably the most disruptive of all the Gods, Poseidon is the youngest son of Cronus (Saturn). He did have a role as a protector, but he was known to cause chaos and could be quite a negative force. He was often in battles where control was the reason for fighting, at war for power. He often interfered with his brother Zeus’ (Jupiter) plans and once even attempted to overthrow him. As punishment, he was made to build the walls of Troy.

He was married and had many offspring, but with many different lovers. He was mentioned in the story of Medusa as he raped her, and she was punished as a result. He was also known to be infatuated with Scylla, the daughter of the Sea God. This infatuation made his wife so jealous that she cast a spell on the girl and turned her into a twelve headed monster.

Poseidon was not noted to be a malicious character, but instead so ungrounded that he seldom understood the impact of his actions.

In astrology, Neptune is the planet of dreams, psychic receptivity, illusion, and confusion.

It rules spirituality and gentleness. Naivety, youthfulness, maybe even passivity.

It is associated with intuition, mercy, and compassion. The shadow of Neptune is deception, manipulation, deceit, guilt, and addiction.

In your natal chart, Neptune can tell you where your psychic sensitivity comes into play. Those with a stronger Neptune placement will find it easier to rise above their ego in pursuit of enlightenment.

The Story of Ouranos

Ouranos (otherwise known as Uranus) was a God who was ‘the personification of the sky’ in Greek mythology.

He was said to be the son and husband of Gaia (earth) and the father of the Titans, and a couple of breeds of Giants. Bit gross but that’s Greek Mythology.

He was known to hate his children. He was said to be self-absorbed, pompous and cruel. It is said that he had a ferocious temper and many people feared him. He also took a particular disliking to those of his children that were ‘unsightly’, such as the giants.

Being the personification of the sky, he was able to control the weather, the air, and he could trap people in the darkness of the night.

Side note: Gaia is considered to be the only entity to have emerged from the Chaos (a Greek term for the void that existed prior to the Universe).

Ouranos is a very old God who was involved in the ‘creation myth’. A myth about how the world as we know it came about.

It is said that in the traditional Greek Mythology style, Ouranos trapped his children in the womb of Gaia fearing that they would overthrow him. His wife Gaia had already prophesized this.

Gaia was in great pain as a result and she ended up begging her children to slay Ouranos. Most of the children were reluctant, though Cronus (Saturn, who followed in his fathers’ footsteps eventually) took a sickle crafted by Gaia and castrated Ouranos. This freed the rest of the Titans.

Ouranos’ blood created several nymphs and monsters, and the Greek God of love and beauty Aphrodite (otherwise known as Venus).

In astrology, Uranus is the planet of big shocks and surprises. To some, it could be seen as the planet of divine timing. It represents the unseen aspects of life.

It’s the planet of breakthroughs and ‘tipping point’ ‘triggering’ events. As you can imagine whenever there’s a lot of activity with Uranus in the air it’s a pivotal time and people may be having a lot of those ‘a-ha!’ moments.  It causes great change, and this can be very shocking at times.

In your chart, Uranus is known as the ‘awakener’. IT shows us in what area of life we want to be free and without restriction. It shows us how we do things in our own unique ways to try and bring about this freedom. In other words, it can show us where we will want to abdicate our responsibility and stay in touch with our childlike tendencies.

Uranus also rules universal truths which can be tracked with data and proved to be effective- but there is no clear explanation for why it works. Astrology itself is an example of this kind of concept.