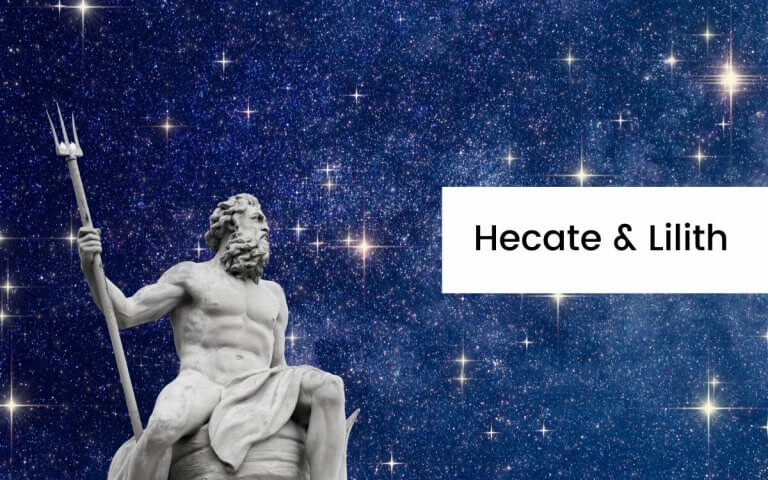 Let us dive into the stories of Hecate and Lamia, their connections with astrology, and why they are the badass women of Mythology!

The Story of Hecate

Hecate is my favorite figure in Greek Mythology (on par with Chiron).

She was capable of both good and evil. She was especially associated with witchcraft, magic, the moon, doorways, and creatures of the night.

She is known as the guardian of crossroads. Crossroads are symbolistic of important decisions and fated detours/ changes in direction.

Hecate assisted Demeter (Ceres) in search of her daughter (after she was kidnapped). She helped her through the night as she could light the way and navigate through the unseen better than others.

Hecate was sympathetic and empathic; she was very maternal and liked to help the underdog.

She was a very powerful Goddess. She had the power to bring people wealth, victory, wisdom, good luck, prosperity to youth and the flocks of cattle. These blessings would also be withheld by her if people didn’t deserve them. She could arguably be viewed as cold and harsh, but nothing she did was unjustified.

She was the only one among the Titans to retain her power under the rule of Zeus. For this, she was honored by all the immortal gods.

Hecate appears in your life when you take something too far. She is cruel to be kind and her purpose is to teach.

Hecate, to me, represents the reasons why things may not work out for us.

Everything she does, good or bad, is done with love. She gives and remains kind until she can’t anymore, and she values herself enough to have strong boundaries.

A very important thing that we are often criticized for having.

The Story of Lamia (Lilith)

Lilith is known in many texts from different parts of history. She was a huge part of Paganism and witchcraft, she was mentioned in the Bible, Greek mythology, etc.

She is known as a dark deity, demonic presence, a sensual Goddess, and a feminist icon.

Obviously, the way she is perceived is dependent on the scripture being read and the general attitudes of people and society at the time.

In Greek Mythology, Lilith is known as ‘Lamia’.

She was a monster and was labeled the ‘child-killer’ because she governed a class of child-stealing demons. She was feared for her hostility.

In Greek Mythology, particularly with women, there is more to a character than what meets the eye.

She was said to be the daughter of Goddess Hecate. Naturally, this would make her a powerful being, if not a little troubled.

It was also said that she was cursed by the Goddess Hera (Juno) to have stillborn children, because of her ‘association’ with Zeus.

Side note: Juno is the Goddess of marriage and was faithful to Zeus despite his infidelity.

The grief was what turned her into a monster. She took revenge by stealing children and devouring them.

Lamia was said to have a sexual appetite which “matched her cannibalistic appetite”. She is said to have enjoyed sucking men’s blood.

Zeus took pity on Lamia after she was cursed and gave her the gift of ‘second sight’. In other words, she was able to see through closed eyes to help her stop obsessing over her unborn children.

In astrology, Lilith represents the ‘dark side of your personality’ as well as the way you relate to sex. It represents a person’s primitive impulses and behavior in its rawest form. It’s arguably the side of us which is the most animalistic. It reveals our repressed sexuality, vulnerability, and the subconscious. It’s related to the ‘shadow self’.

This is a very intense area of your chart and it’s worth looking into. Your Lilith helps you to understand the ways you may be toxic, and it can help you understand, heal and love yourself despite your quirks.

Moon in Virgo in the US Chart: I Want to Help!