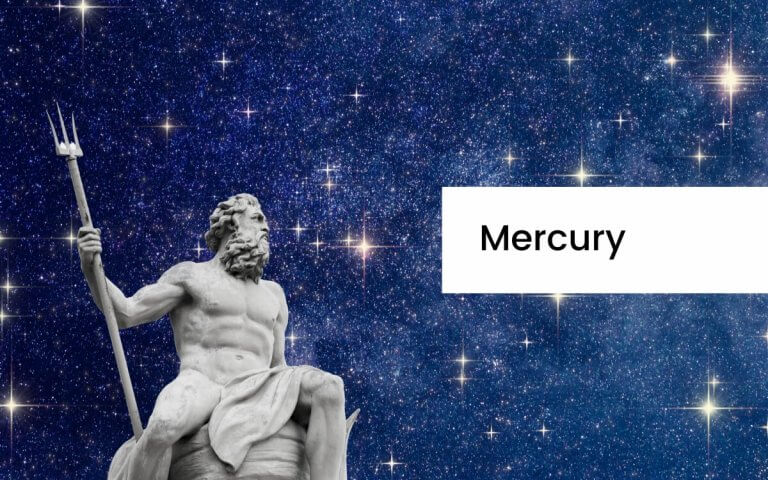 As many people might already know due to the common knowledge of what ‘mercury retrograde’ is, mercury is the planet of communication.

In Greek Mythology, the equivalent figure of Mercury is a God called Hermes.

Let us dive into the connection between Mercury and Hermes.

The Story of Hermes

Hermes was the son of Zeus and nymph Maia. He had children but was not said to have a wife. Hermes was the God of trade, wealth, luck, fertility, sleep, language, travel, and robbery. He represented movement as the leader of the Nymphs and the Graces. He was known to be incredibly smart and could use his intelligence to be mischievous.

Hermes was the herald and messenger of Mt. Olympus. He can be seen as a symbol of crossing boundaries- as his role meant he would have to guide between the realms of Gods and humanity.

Hermes was a character in a fair few Greek myths due to his playful nature and ongoing search for amusement.

He is noted in a couple of myths as being quite heroic as he freed the Gods Io and Ares on two different occasions. Io had been captured by a 100 eyed monster called Argos, whom Hermes was ordered to kill. Ares was imprisoned in a cauldron by twin giants for a year before being set free by Hermes.

That being said, his mischievous tendencies could go too far. When Hermes was an infant, he stole some cattle from his brother as a prank. Having already sacrificed two by the time he was caught and ordered to return them- he became associated with thieves.

Being the God of communication, Hermes was seen as somewhat of a counselor. He was credited for inventing the alphabet, the dice, fire, panpipes, and sometimes he is said to have created music.

He is associated very much with the lyre and is often depicted holding one- it is said that he invented it.

We tend to see people’s mercury before we get to know them due to their style of communication and the way they choose their wording.

In your chart, it represents coordination, thought processes, ideas, and sensory information. It’s telling of our tendencies when expressing ourselves, and how we exchange ideas. Mercury is inquisitive, but the dark side of our mercury could make us indecisive, high strung and overbearingly particular.

As you can imagine, Mercury influences us more prominently because it sways the way we relate to each other. When Mercury retrograde hits and we are forced to review our decisions/ communications/ trades and travels, things are more chaotic because communication is not meant to run smoothly.