For starters, an Aries personality is not a very tricky business to understand if you try. The Aries zodiac sign brings with it a lot of personality traits that can help a person achieve all that they wanted in their life. In addition to that, these very Aries traits can also become an issue at times because of the social implications they may hold. We will be discussing all this and more in the following.

Aries at a glance

Traits of Aries generally tend to be on the far left of the political spectrum, if one tends to look through that lens. To a person not interested in politics, an Aries horoscope personality might look like a wild spirit, something that always wants to break free and explore things that nobody has ever dared to explore before.

All of this happens due to very specific astrological knowledge, based on logic and science that has existed for centuries now. We decipher it for you on this page, so you get to know the Aries horoscope personality on a more personal level.

The Main Reason behind the very specific traits of Aries

Aries qualities, as we mentioned above, all derive from the basic personality trait of being a free spirit, someone who does not like any kind of harness on them. The best careers also subsequently are managerial roles for them where they get the decision-making powers, instead of implementing orders taken from someone else.

The primary reason why this occurs is that of Aries’ zodiac element. It is a common belief among astrologers that a star sign personality is greatly affected by the traits of its parent zodiac element.

In that sense, Aries qualities stem from the zodiac element of fire. Subsequently, all of Aries traits tend to resemble the characteristics of fire and how it behaves in nature. The Aries star sign personality is thus energetic, and full of potential, with the determination that is unwavering. Apart from that, the Aries zodiac sign also tends to be very courageous and adventurous, always trying to jump ahead and leave everyone behind in their quest of trying to be the best.

A Look on some Positive Aries Traits

As we have already established, Aries characteristics like to lie on the far end of the spectrum, being full of energy and coming nowhere near middle ground. This makes it a lot easier for astrologers to deduce what kind of a person an Aries will turn out to be based on their date of birth. Let us now discuss a few of Aries characteristics that help add to their personality and build them up strongly for the life they have ahead.

For starters, being lively and positive is a typical part of Aries traits. These two qualities make it easier for the people belonging to this sign to live life to the fullest and make the best use of every opportunity they get. Oftentimes it is the case in life that one falls hard. An Aries person’s positivity can help them get back on track before any other, making their recovery time a lot less and their chances of winning at life a lot more.

Being positive and lively is not the only good trait that an Aries person possesses. These people are extremely passionate about what they intend to do and do not rest until they get the job done.

Aries description clearly tells, deriving from its zodiac element, of how the element of fire plays a role in regular Aries personality traits. The fire is a clear representative of Aries traits as being full of energy, determination, willpower, and as we mentioned before, passion about what they intend to do. 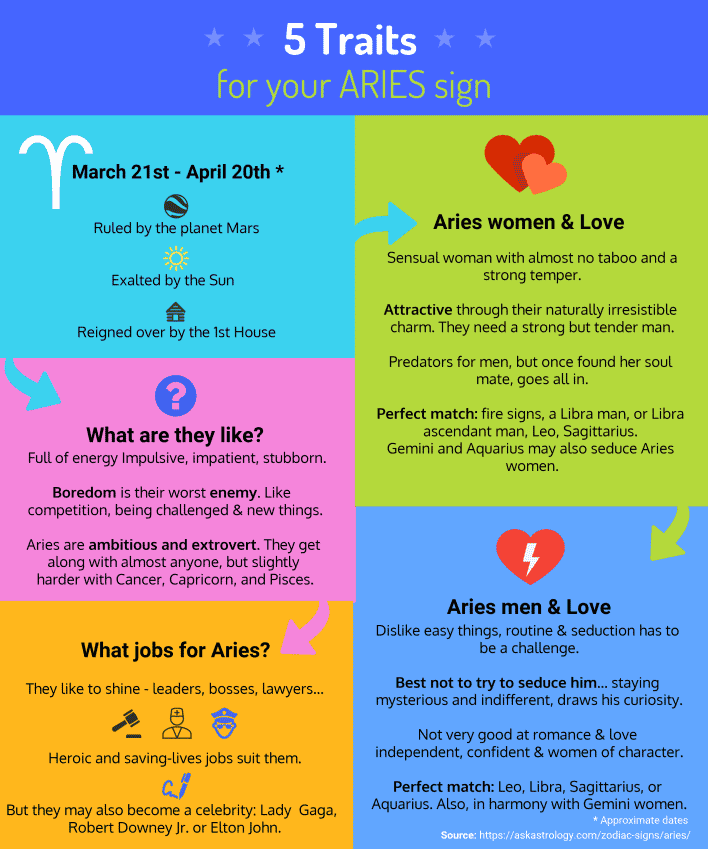 Embed infographics on your site

Did you know, though?

With this drive, you can expect any person of Aries nativity to go on and win at anything they have set their heart on. Imagine an Aries person who wants to win a race. They may not be physically fit to do the job, but they will realize that, and channel all their energy into reaching the right state beforehand, so they can easily win the race by a large margin. There are a lot of famous people that are born Aries, and you can be inspired by them too. Very popular Aries people include Lady Gaga, Jackie Chan, and Maria Sharapova!

A Little Light on the Negative Aries Traits

Like everything in this world is properly balanced, and in equilibrium, the qualities allotted by the star signs are too. If a sign tends to have positive qualities, they have a few negative ones too, signifying how no person is a perfect one.

Aries description has laid out quite a few negative traits that can be found in the people born in the Aries month. Let us tell you about those and how best to counter them.

For starters, the negative Aries traits include being stubborn, arrogant, as well as impulsive. While some people may argue that these qualities are necessary to make an impact in the world, these are against the basic moral values that are needed for the world to run in harmony.

Aries traits thus tend to go about in the opposite direction in such a way. The proper way to counter this is to make sure that one realizes early on of his shortcomings and tries to control his temper accordingly.

Aries traits are quite a lot, and honestly, quite not possible to encompass in the entirety of this page. However, with what we have gathered so far, it can easily be understood that these traits can equally be used to promote any good or bad personality.

Potential is in both directions, and it will be your choice in the end about where you want to utilize your Aries traits. With that being said, it is always a good habit to keep your negative traits in check and boost your positive traits by learning additional skills that can help you out in the real world.