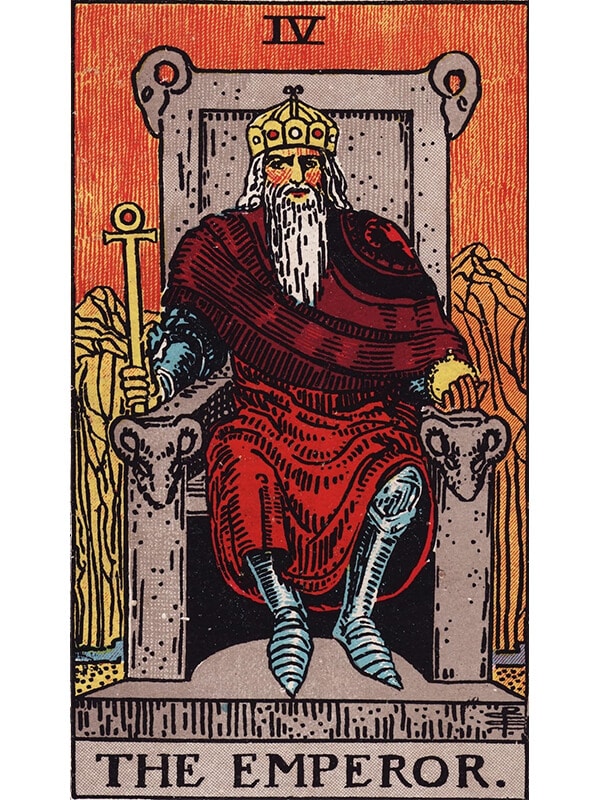 The emperor tarot card is the prime incarnation of masculine energy within the major arcana of the tarot deck. As such, it will mainly embody all the stereotypes traditionally attributed to the male gender in modern society. It can also represent a specific person, usually a man, though it could be a woman with, particularly masculine energy.

The male figure depicted on the Emperor card is usually seated on a throne and bears the garment and tools of a monarch (usually, a crown, a scepter, and a globe). The way he sits on the throne commands respect, as he is an incarnation of stately authority.

Where the Empress was depicted in a background remindful of nature, where there is usually nothing organic in the background, to represent a more intellectual environment. The Empress ruled over nature, the Emperor rules over the higher realms of wisdom and thought, leaving physical matters behind to focus on immaterial concepts.

As stated above, the Emperor’s meaning embodies most of the stereotypical values of the male gender. Authority, power, achievements, and willpower. This is a card that highlights a need for structure and discipline, something orderly that must make sense of the chaos around.

The regal, noble aspect of the Emperor card can also easily be read as the presence of a great figure of authority in the Querent’s life. Their Father, of course, but it could also represent any person holding some sort of power over them, like a teacher or the boss of their company. When found right side up, unless surrounded by more negative cards this is usually a positive influence, as long as the effective hierarchy is understood and respected.

The number 04 card of the Major Arcana, the Emperor, represents taking the lead or responsibility for something in your relationship search or relationship development. Power is a very attractive quality as a partner and in a partner. When this card shows up it is time to think about your status and the status of the person you seek or happen to be with.

If you are single, this card will ask you to determine if you feel you are “a good catch”. If so, why? What is your status? The Emperor represents the masculine divine in all of us, men and women. Being powerful is attractive, which can be measured by financial success, professional recognition, and potential for future success. Is your life “in order” for a relationship? If so, then market yourself positively and enthusiastically.

If you are in a relationship, this card encourages you to think about your responsibilities and what you want to accomplish with your partner. What do the two of you want to achieve together and how will you do it? Do you need a supportive person that allows you to go all-out in the world and come home to a warm, loving environment that allows you to recharge? Or, do you need to be the supportive person? Or, do you need balanced power efforts from both of you?

Career encompasses school and education if that is your current stage; work that is necessary, but not what you would consider a career path; and your actual career path. Regardless of your current stage of development, the Emperor represents the mapped path to success that we need to follow and the consistent behaviors we need to apply to be considered invaluable to our organization.

If you are a student and this is your card, then you need to do the necessary things to achieve excellence. Be to class on time and attend every class. Turn in all assignments on time and with some extra quality that helps get you recognized by your teachers and professors. If you follow the rules and excel within them, then the Emperor will see to it that you have future success.

If you are working, but not doing something you would consider a career, then it is important to understand the responsibility of your work and company so you can get the most value out of what you do and get paid at the highest level allowable in your work situation. Embrace the rules and uphold them; they will protect you and allow you to flourish within the framework of your profession.

If you are in a career path, then this card wants you to think about how you lead and what you want your leadership to accomplish. Others will look to you for guidance and you should be confident laying out your vision and executing that vision for others to see and benefit from. You want to work to increase your power when this card appears.

The Emperor card, when reversed, can either be a sign of benevolence and compassion in a positive context (a person gifted with authority deliberately yielding some to do some good or make a moral choice) or conversely to highlight potential trouble brewing due to excessive use of authority in a reckless way (systematic obstruction to any project, immature use of power without any regard to the consequences). A police officer abusing his authority with no regard to the limits of the law would be a good example too, or a corrupt politician using the system to their own benefit.

Reversed, this card shows your lack of power in a relationship and the frustration that comes with the power imbalance. It could represent an abuse of power, your own, or someone else’s, that affects you negatively. If the reversed card makes you think of a person, there is a good chance you are aware of or becoming aware of their narcissistic tendencies or personality. Since some kind of power issue is most likely involved, be careful. You need to work your way out of the unhealthy situation safely.

When this card appears reversed in a question about work or career, then you want to be on your guard for abuses of power from your employer or fellow employees. The appearance of the card may also indicate frustration or blockage in your attempts to get promoted or better pay. You may have to acknowledge you are trapped in your current position and the timing is wrong to attempt to leave or change jobs.

After meeting their Mother, any child learns to recognize their Father. And indeed, the Emperor tarot card represents the father figure for the Fool as they go further along in their journey. Like the traditional and stereotypical role of the father in modern society (no matter how outdated it might seem), the Emperor is here to offer the Fool a lesson in structure and authority.

The Fool learns to make sense of their sensory intake through learning rules that will create a pattern in their life. Anything that falls outside the realm of chaos and that is predictable falls within the Emperor’s domain. This is a card that promotes order over chaos.

The Emperor card represents the traditional and stereotypical male figure of authority, a king or a leader. The context will determine whether this is a reference to someone about to influence the Querent’s life or simply something temporary. Wise, regal, and intellectual more than physical, the Emperor is the archetypal father figure that can be relied on.

The Emperor card is the prime incarnation of masculine energy within the major arcana of the tarot deck. As such, it will mainly embody all the stereotypes traditionally attributed to the male gender in modern society. It can also represent a specific person, usually a man, though it could be a woman with a particularly masculine energy.

Meditating with the Emperor

You can select the Emperor for a session of meditation if you need to channel willpower and determination within yourself. The traditionally male stereotypes can be channeled to improve your confidence and authority, in a way turning you into the regal and commanding presence depicted on this arcanum.

You can also meditate using the emperor tarot card if you feel the need to center your thoughts again as you tackle a particularly tough problem or situation. This will enhance your own drive and motivation to focus on that problem and solve it. As long as you remember who you are and are full of benevolence, you should avoid most of the negative aspects regularly found when reading the Emperor card.