Harvest Goddess Virgo – The Queen of the Heavens 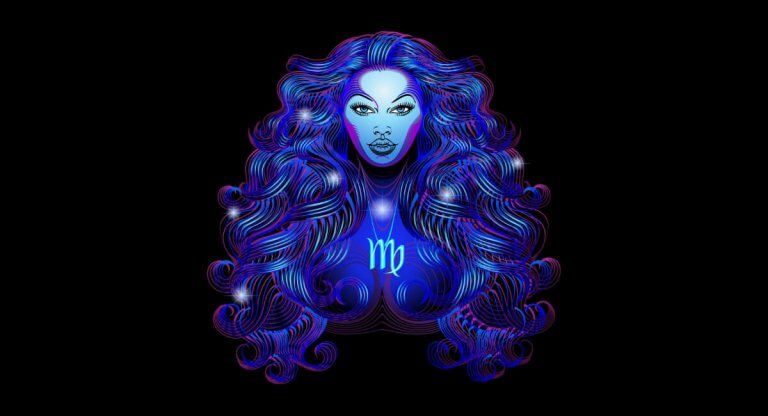 “The Virgin with her sheaf belongs to Ceres,” The Astronomica, Manilius, 1st century AD.

Most of us know our sun sign or sign of the Zodiac, but what does the constellation look like in the night sky, and what’s the seasonal story behind it? It’s time to meet Virgo the Heavenly Maiden, Corn- Goddess of the Zodiac, also known as Ceres.

Source Wikipedia: The Hermit from the Rider-Waite Tarot deck

Find its brightest star, the brilliant-blue-white Spica, and you will work out the rest of Virgo with her feet pointing east.

It might seem a bit of a stretch, trying to picture a person from that photograph, but add in a few more of her stars, imagine her lounging, dangling a sheaf of wheat from one hand (Spica.)

And now you see her.

Spica is a double star, brighter than our sun. Its name is from the Latin, meaning an ‘ear of grain’- or a sheaf of wheat.

It’s sometimes called ‘The Lonely One’ because it is so far from the others, and the astronomer and astrologer Ptolemy saw these stars as ruled by Venus and Mars respectively, mated together in a chaste, androgynous union, like the slightly remote purity of Virgo herself.

Vindemiatrix, ‘the Grape-Gatherer,’ seen at daylight, was once seen as a sign that now it was time to pick the grapes.

It’s mind-boggling to consider that our own Sun is just one star of the Milky Way, and the Milky Way is only one of a collection of galaxies known as The Local Group.

This contains three large spiral galaxies: the Milky Way, Andromeda, and the Triangulum Galaxy, and a few dozen dwarf galaxies. But The Local Group is just one member of the Virgo Cluster – a collection of 1200-2000 galaxies that stretch across 15 million light-years of space.

And the Virgo Cluster is just one cluster in the Virgo Supercluster.

Wiki Commons: the constellation of Virgo is especially rich in galaxies, with more than 1300 galaxies in the Virgo Cluster. One of these, NGC 4388, 60 million light-years away, is captured in this image, as seen by the NASA/ESA Hubble Space Telescope’s Wide Field Camera 3.

But if the constellation of Virgo is most visible in May in the northern hemisphere, why are the birthdates for the sign of the zodiac August 23-September 22nd?

Astronomy is not Astrology. The sky as we see it is called the celestial sphere: a giant blue ball that rotates around us (its rotation axis crosses the poles). The Sun appears to move along with this sphere every day, rising in the East and setting in the West, but it also appears to move, in this sphere, at a one-degree-a-day pace, on the contrary direction (West-East).

This annual motion is on a circle called Ecliptic, a great circle in relation to the Equator.

Now imagine a belt around this circle. This is the Zodiac. Ptolemy divided this 360-degree belt by 12 for the elegance of arithmetic, based on 12 constellations described by the Babylonians, ignoring a thirteenth constellation, Ophiuchus, so that a zodiac sign represents roughly a 30-degree chunk of this belt.

But the constellations have moved in the last two thousand years, and changed positions relative to Earth, owing to wobbling of the Earth on its axis; an effect known as precession.

The dates for the zodiac signs named after the zodiacal constellations, however, have remained the same, but this great fact of astronomy does not affect the validity of the dates of your Zodiac Sun sign as calculated by Ptolemy.

The exact dates of the Zodiac signs can vary by a day or two each year and are calculated by astronomers every year at sunrise on the day of the Spring Equinox.

Shala was an ancient Sumerian deity (later Babylonia, the area now known as southern Iraq and Kuwait) She was the goddess of grain -and also compassion. Why link these two things? Famine is suffering. A good harvest was seen as a blessing of the gods.  What is planted in the spring must yield a crop in the autumn, or famine is likely to follow.

Shala was married either to the fertility god, Dagon, or the storm god, Ishkur, or possibly both, with one as her consort.  This is significant. Virgo the Virgin is not about a state of physical virginity – but refers more to an attitude; a slightly elusive and rather refined quality, male or female.

Shala was associated with the constellation of Virgo and vestiges of symbolism associated with her continue, such as the star Spica, the ‘ear of grain’, even as the deity name changed from age to age and culture to culture.

In 10th century BC, the Babylonians called part of this constellation, “The Furrow,” referring back to the goddess Shala and the Shala Mons is a mountain on Venus named after the goddess Shala.

In Egyptian mythology, the sight of Virgo in the night sky was also associated with harvest time, and with the goddess Isis.

In Indian astrology, she was The Maiden, Kanya.

To the Greeks, she was the harvest goddess Demeter, also called Ceres, (the root of the word ‘cereal’) and also by association, her beloved daughter, Persephone.

When Hades abducted Persephone to live with him in the underworld, Demeter went into mourning. There was no harvest that year. People and livestock starved and Zeus, the king of gods, eventually intervened, insisting that Hades return Persephone to Demeter. But Zeus also stipulated that Persephone must not eat until her return, and Hades, not wanting to part with her, gave Persephone a pomegranate, knowing fine well how much she liked them, and she ate some of the seeds on her way home.

So, Persephone went home to her mother, but because of the pomegranate she has to return to the underworld for four months every year, and then Demeter grieves; winter returns, and the land sleeps.

Virgos are practical but artistically gifted. They are hard workers who love to better themselves. They love to analyze, and their perceptiveness means that they can always find or create order within chaos. They are honest friends although, being extra discerning, and analytical, they might have a tendency to analyze you, pointing out your strengths and also your mistakes and weaknesses. This will probably be annoying, very, but it’s usually well-meant. They may also give great advice because of those same analytical abilities.

Their quest of self-improvement includes their appearance. They are perfectionists, highly concerned about the impression they give, but at the same time, they are very ready to help others, which can make them targets of those who wish to take advantage of them. Virgo is ruled by agile, communicative Mercury, and Virgo’s brain is in overdrive much of the time. These folks can do great things and get a lot done – if they don’t lose sight of the original vision, and get overly bogged down in non-important detail.

Next month – a cosmic weighing of the Heavenly Scales – Libra

Waxing Crescent Moon
The moon is currently in Aquarius