Libra the Celestial Scales: Weighing the Balance in the Stars

Home » Blog » Horoscopes » Libra the Celestial Scales: Weighing the Balance in the Stars 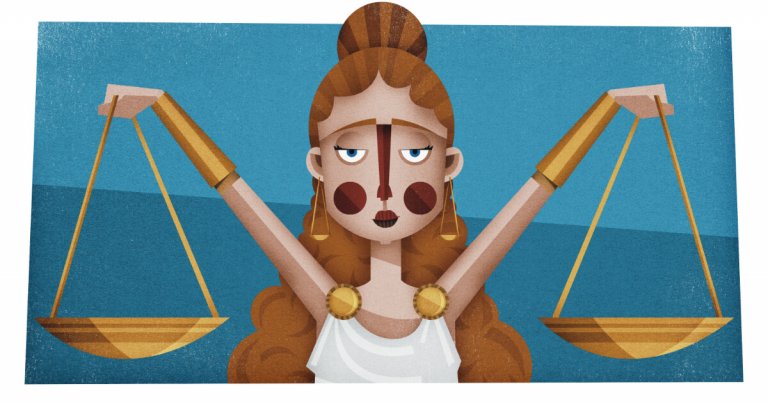 Most of us know our sign of the zodiac or sun sign, but where did get its name from, and what does it look like in the night sky? Read on for the story of Libra…

Libra (which technically, is correctly pronounced Ly-bra as in Library) is a small but distinct constellation next to the constellation Virgo in the evening sky, looking like a lopsided diamond and is visible in the northern hemisphere between April and July. Libra is most visible directly overhead at midnight in June. It is 29th in size of the 88 constellations.

Libra, like Cancer, is fairly faint from Earth in comparison with other constellations and contains no spectacular first magnitude stars, but it contains a very old galaxy cluster, possibly around 10 billion years old, the same age as our own galaxy, The Milky Way.

There is a red dwarf star Gliese 581 which has three orbiting planets, one of which may possibly be suitable for life. This system is about 20 light-years from Earth.

Libra used to be regarded, not as a constellation in its own right, but as part of neighboring Scorpio and Virgo. This legacy remains in the names of its brightest stars.  The brightest star in Libra is a binary star about 77 light-years from Earth. α Librae. Its common name is Zubenelgenubi, meaning “the Southern Claw” in Arabic. The second-brightest star in the constellation of Libra is β Librae, also known as Zubeneschamali, from the Arabic for “The Northern Claw.”

Since 2002, the Sun has actually appeared in the constellation of Libra from October 31 to November 22. This is different to the dates used for this sign in your media horoscope which is based on modern western or tropical astrology.

This is because the Sun used to be in the sign Libra from the northern autumnal equinox (c. September 23) to on or about October 23, when the hours of night and daylight were the same- hence the Libran key concept of natural balance.

But astrology is not astronomy. This fact of astronomy does not invalidate your horoscope. Western Tropical astrology is based, not on current astronomy, though modeled on the heavenly bodies, on an arithmetic model of the visible skies of the zodiac as seen from Earth, calculated by the Greek mathematician, astronomer and astrologer Ptolemy in the 2C AD.

Libra was once included as part of Scorpio and was known in Babylonian astronomy as MUL Zibanu (the “scales” or “balance”) with an alternative name, the Claws of the Scorpion. In ancient Greece, Libra was also seen as the Scorpion’s Claws.

The scales were held sacred to the Babylonian sun god Shamash, who was also the patron of truth and justice, and ever since these very early times, Libra has been associated with law, fairness and civility.

3000 years ago, the Sun entering Libra marked the beginning of autumn, when days and nights were of equal length, i.e. balanced, and Roman astrologers considered that the constellation of Libra represented the scales held by Astraea, goddess of purity and Justice. This location ceased to coincide with the constellation in AD 730 because of the wobble of the Earth, and the resulting precession or movement of the equinoxes relative to Earth.

Libra was first recognised as a constellation in its own right in ancient Rome, when it began to represent the scales held by Astraea, or Dike, who in Greek mythology was actually associated with Virgo. In ancient times, the stars of Libra, The Scales, were also intermingled with those of  Scorpius by the Greeks, but were always considered as a separate group by the Romans.

According to the writer Manilius, Roman judges were born under the sign of Libra.  The Moon was said to be in Libra when Rome was founded, in a historical passage, which states “qua condita Roma“.

But for the ancient Greeks, Libra, the constellation between Virgo and Scorpio was part of and ruled by Scorpio.

Libra is one of the three zodiac air signs, the others being Gemini and Aquarius.

Libra is the only sign that is not represented by a human or animal, but the scales signify the collective and enduring human hunger for justice, as well as Libra’s own especially keen personal need for balance, order, and equality. Many astrologers view Libra as an especially lucky sign because it occurs during the peak of the year when the rewards of hard work are harvested.

Libra is suave, clever and extremely easy to like. The classic Libra subject has charm and can be a great listener with sharp observation skills and acute perception.

Because Venus, the goddess of love, rules Libra, the Libra subject is especially, even acutely sensitive to beauty in anything, whether it is a person, nature, art, or music. They dislike loud noises, cruelty, nastiness, and vulgarity, as they are naturally extremely civilized people. Born diplomats, Libras try to cooperate and compromise with everyone around them to create a tranquil atmosphere. They can sometimes be a little tiring to be with as they are constantly re-assessing and adjusting their thinking, and can be more changeable even than Gemini.

Public Domain: Venus, the ruler of Libra, The Birth of Venus by Botticelli.

Libras may show negative Scorpio traits just the same as a Scorpio subject. They may be touchy and thin-skinned and tend not to handle criticism as dispassionately as they dispense it. They like to be the center of attention and may resent it when they are not. Libra can be jealous, moody, and an expert practitioner of passive aggression, or go further as the ‘iron fist in a velvet glove’ – smoothly vengeful, or even ruthless.

But smiling, civilized, smoothie side up, what’s not to like?

Next time – The Celestial Scorpion