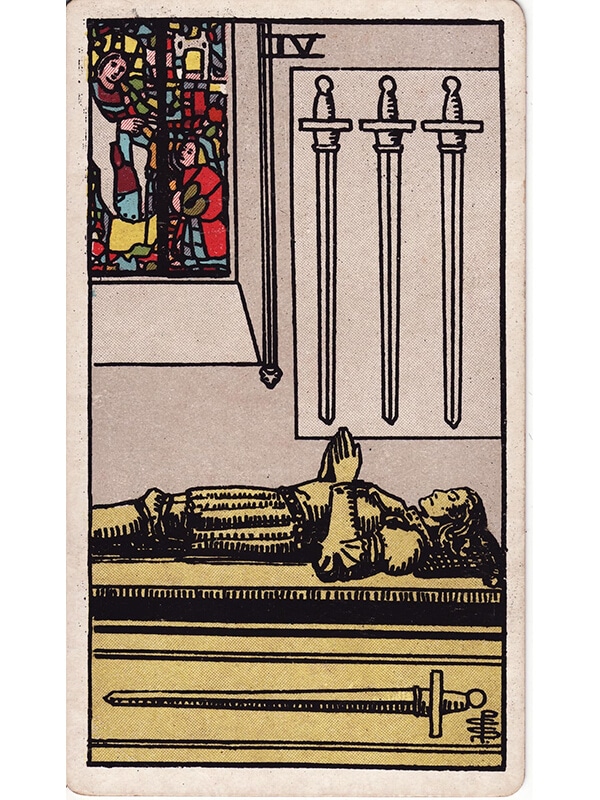 The quiet silence that can usually be found when one visits a sacred tomb or shrine resonates within the Four of Swords tarot card. It is not meant to represent an actual tomb, but the introspective time needed to get some rest and perspective when dealing with a tense and stressful situation. Too much pressure tends to warp perceptions and lead to rash judgments and decisions, so the Four of Swords is here as a reminder to take a step back and breathe before you act.

The image clearly represents a tomb, with an effigy of a praying knight. Most colored versions of the RWS deck use a golden hue for the effigy instead of stone gray. One sword adorns the tomb itself, and the other three are hung from a wall, though the perspective makes it seem like they are hanging over the knight’s head, echoing the myth of the sword of Damocles.

It might not be obvious from the rather grim image of a tomb, but the core meaning of the Four of Swords in a reading is a time of rest and relaxation. It calls for a timeout, a way to break from the usual stress and fast-paced life most people lead in modern times.

As always, context is important. Combined with other positive cards in a tarot reading, it might refer to a nice time away from the subject’s routine, like a quiet country holiday, or some paid leave away from work.

When the Four of Swords is drawn next to more ominous tarot cards, however, it should be seen as some kind of warning that rest and relaxation are of primal importance in the current situation to avoid reaching a breaking point, advising you to stop before it is too late.

When drawn in a tarot spread that focuses on love, the Four of Swords should be seen as a warning. While not really a negative card per se in that context, it nonetheless calls for a timeout, some moments spent in isolation in order to build back your energy.

Usually, it means that there is a real and tangible danger hovering over the subject’s romantic situation, a big argument about to break, or an urge to lash out at the other that might be motivated by the stress and pressure of everyday life rather than a genuine concern or cause for a fight. Deliberately spending some time alone will usually be enough to gain some perspective on the situation and get back to the relationship without causing undue harm.

Career encompasses school and education if that is your current stage; work that is necessary, but not what you would consider a career path; and your actual career path. Regardless of your current stage of development, the Four of Swords represents the need to take a “mental break” from your studies, work, or career.

If you are a student and this is your card, then you may need to take a semester off or do something to rest your mind. It can be as simple as disengaging for a day, a week, or longer. It is important to let your mind rest from time to time so when you study, you are fresh mentally and can learn optimally.

If you are doing work that is necessary, but not a career, then you may be letting yourself know you need to use a vacation day or a few vacation days. You may be approaching burnout, which is why you have drawn this card. Get the mental rest you need before you break down.

If you are in your career, then the Four of Swords represents a need for a significant break or shift so your mind can “be at ease”. You may need to hire someone to take over a task that is consuming too much of your time or you may need a long vacation, and only you can make the effort to initiate it. Without the break, you could hit burnout.

A reversed Four of Swords in a tarot reading usually deals with the consequences of reaching a breaking point. In a professional context, this minor arcana card would probably represent a case of burnout, where stress has become so overwhelming that the subject feels powerless and lost.

Alternatively, a reversed Four of Swords in a reading might represent a detrimental form of “rest”, ineffective procrastination that does nothing more than waste precious time and endanger deadlines without being impactful enough to restore as much energy as a clear-cut period of rest would.

Reversed, this card indicates that there is some worry or concern “disturbing the peace” and harmony of your relationship. You may not have even known there was a problem because it was quietly building. This card reversed provides you with a warning, you need to stop going about business as usual and give your relationship some extra attention.

When this card appears reversed in a question about school, work, or career, then you are likely already in some form of burnout and need to address this energy and the difficulties it can cause. Depending on the intensity of the burnout, you may even need to consider looking for new work. Or, maybe you just need a solid break for a lengthy period of time.