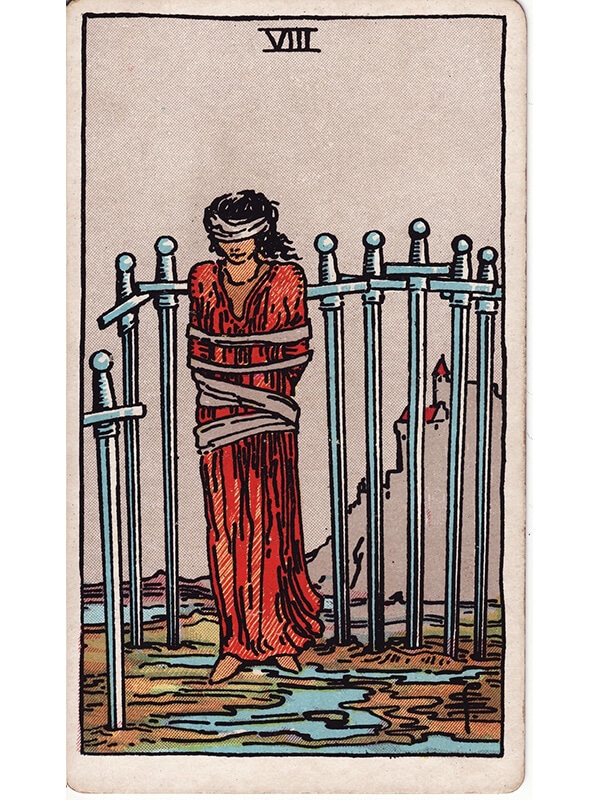 Reversed: self-depreciation, giving up, inventing imaginary complications, and holding them to be true

A difficult card overall, when the Eight of Swords appears in a reading it usually points to a particularly bad or perilous situation, that will only further how dangerous it is by convincing anyone falling into that situation that they will not possibly be able to find a way out. The best way to ensure that someone will never succeed in a specific endeavor is to convince them that it is so helpless that it is not even worth it to simply give it a try, thus fulfilling their own prophecy since the only way a problem can be genuinely impossible is when you do not even try to solve it.

The main character that can be seen in the Eight of Swords (in the RWS tarot deck) is a woman wearing a long flowing dress, but tightly bound and blindfolded like a soldier on the receiving end of a firing squad. There are eight swords planted on the ground around.

The woman’s legs and feet do not seem bound in any way, and yet she does not seem to be moving or making any attempt to escape her current predicament. We can guess that she knows about the presence of the large, sharp, planted swords all around her, and thus knows she risks getting seriously hurt if she tries to escape and cuts herself deep on one of these blades.

Again, there are not many positive things to be found in the Eight of Swords, which is kind of a recurring theme in the numbered cards from the suit of Swords. Here, the core meaning of the card is the feeling of helplessness that can paralyze you when you receive a series of bad news or are thrown right in the middle of a crisis with limited options.

The Eight of Swords of the minor arcana highlights the presence of serious and complex problems, and like the woman surrounded by swords in the picture, the subject of the Eight of Swords in a reading can feel trapped in his or her current situation.

In a tarot spread or reading dealing with romantic interests and love, drawing the Eight of Swords is usually difficult to process for the subject of the reading.

A reversed Eight of Swords would be even worse, in a way, the reflection of the all too common modern plague of being convinced that they have no chance at all with the person they are interested in. You get into negative thoughts and become the architect of your own failures. The negative thoughts can begin to cycle, as the circle of swords, and create a limitation that not only prevents you from going outside the swords but does not allow someone to approach you.

Career encompasses school and education if that is your current stage; work that is necessary, but not what you would consider a career path; and your actual career path. Regardless of your current stage of development, the Eight of Swords represents anxiety, worry, and limiting thinking.

If you are a student, then drawing this card indicates some anxiety or worry, possibly over a test or grade for a class. Your limiting thinking is likely to cause the very problem you are anxious about. If you are worried, check in with your instructor, and get feedback about your performance. Consider using a tutor if you do not feel you can learn adequately on your own.

If you are doing work that is necessary, but not a career, then you may have to acknowledge that you feel “trapped in a dead-end job”. If so, then changing jobs might be the only way to break your anxiety. If that is not possible, then you will need to find a way to help change your mental state, which may involve counseling or changes in other areas of your life.

If you are in your career, and the Eight of Swords appears in a reading, then you need to address limiting thinking that is preventing you from advancing or growing in your chosen field of expertise. What might be the root cause; is there an actual external situation (downturn in the market) or something internal (guilt regarding your success)? Either way, you need to address you worries before they cause permanent setbacks or problems.

The meaning of the reversed Eight of Swords in a reading further develops the negative feelings and situations described above, by creating even more problems, or perception of problems. Here, the subject of the reading imagines themselves to be surrounded with “swords” they cannot see, and restrict their own actions and possibilities for no other reason than these perceived and invisible threats.

Reversed, this card indicates that you feel trapped and need to desperately change your situation. Like other reversed sword cards, you need to face an irredeemable circumstance in a relationship or something irredeemable about the relationship. Your mental state may be especially fragile and you would do well to seek trustworthy support outside your partnership.

When this card appears reversed in a question about school, work, or career, then you may have to lose your investment in time, effort, and savings to escape and save your mind. You may have been trying to “muscle through” and persevere, but the mental anguish of staying on the current path has really reached a breaking point. True escape is your best option.