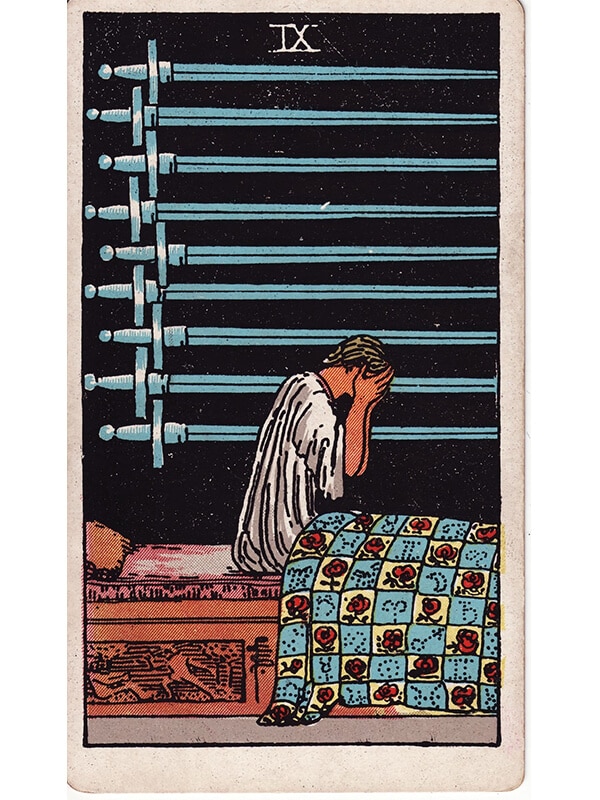 Furthering the series of negative concepts regularly found within the suit of swords, the Nine of Swords represents helplessness, nightmares, and great anxiety. In a professional reading, this card might also be the bleak echo of some long-lasting depression or illusions about a perceived lack of self-worth. Alone against their environment, the subject of the Nine of Swords meaning will be the architect of their own despair and, usually, require help from some outside source, like a spiritual advisor, coach, therapist, or psychiatrist.

The Rider-Waite Smith Tarot deck once again provides a rather depressing and bleak scene for one of the numbered cards in the suit of swords. In this card from the Minor Arcana, we can see a woman in her bed, but sitting up instead of lying down, with her head in her hands. The background of the scene is black, and the nine swords from the cards are seen displayed on top of one another as if held on a rack in the wall.

We can easily imagine that the woman has a hard time sleeping, or has just woken up from a particularly dire nightmare. Several astrological symbols can be noticed, hidden in the decorative squares of her blanket.

Furthering the negative theme of the numbered cards in the suit of Swords, the Nine of Swords has nothing positive to offer, whether it is drawn with its right side up, or drawn reversed.

The core meaning of the Nine of Swords in a tarot reading echoes what could be deducted from a cursory glance at the picture: both depression and nightmares are valid interpretations of this card. These nightmares can be the results of self-inflicted doubts or regrets or the expression of some kind of guilt on the part of the subject of the reading.

The Nine of Swords in a tarot reading focusing on love is just as bad as in any other context. The most common interpretation might be a slow erosion of any currently active relationship in the Querent’s life. It might also represent a particularly bad and painful relationship, leading to the kind of depression and nightmares that were mentioned above.

This is particularly true for many people who suffer from a toxic relationship, where their own lack of energy or despair keeps them stuck in a vicious cycle and taints their own perception of their relationship with falsehoods.

Career encompasses school and education if that is your current stage; work that is necessary, but not what you would consider a career path; and your actual career path. Regardless of your current stage of development, the Nine of Swords represents cruelty and the need to protect oneself.

If you are a student, then drawing this card indicates that you will need to overcome some unfair treatment that is interfering with the successful completion of your education. You need to guard yourself against people around you who are in positions of power who want to see you fail.

If you are doing work that is necessary, but not a career, then you may be a target for blame or scapegoating by someone else who is actually doing harm in the workplace. If you are on the receiving end of cruel and unfair behavior, then you should leave the job or leverage any protections available through the workplace.

If you are in your career, and the Nine of Swords appears in a reading, then you need to be aware of jealous competitors that will stop at nothing to see you fail or expelled from the business. Do not be naïve and risk being so taken advantage of that you cannot keep your career intact. There may be elements in your company or business that need to be flushed out before they destroy all you have built.

When a reversed Nine of Swords is drawn in a tarot reading or appears in a tarot spread, the feeling of intense torment and depression is even stronger and should be taken even more seriously. On top of that, it could also represent the slow erosion of hope within the subject’s mind, slowly sapping their own sense of self-worth.

A reversed Nine of Swords can also represent a much more literal interpretation of the illustration on the Rider Waite Smith tarot deck, and represent either insomnia or nightmares.

Reversed, this card indicates that you know there is cruel behavior occurring between you and your lover and you cannot turn back the tide. If you remain together, the negative energy will keep reinforcing both of you and more and more pain will ensue. You need to break away and seek compassion before you become a lost soul regarding love.

When this card appears reversed in a question about school, work, or career, then you may be facing something as severe as identity theft, or an improper lawsuit, or something with similar negative and cruel energy that you cannot win against, leaving you to need to break away completely and start in a new school, job, or career.