The Numerology of the Number 4 in Tarot

Home » Blog » Tarot » The Numerology of the Number 4 in Tarot 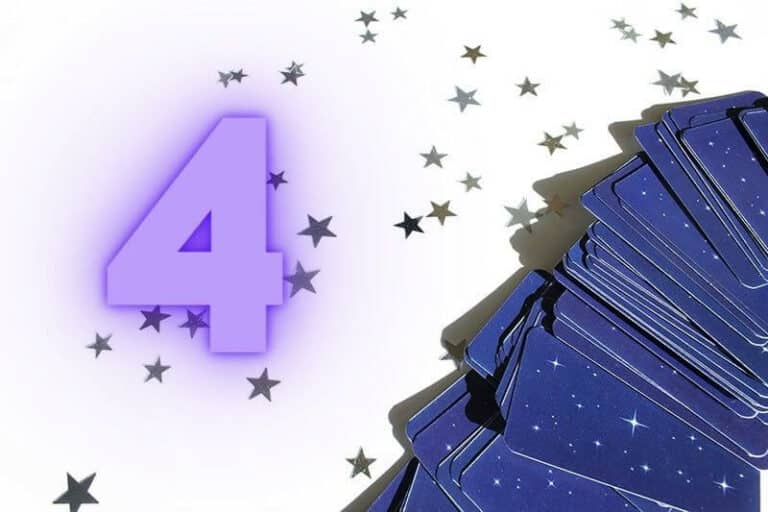 We have the numbers of our birthday, month, and year.  Most countries have a number sequence for citizens (in the United States, it is the 9-digit Social Security Number or SSN).  Most of us have a phone number; if we drive a car, we have a number plate.  Each word and sequence of numbers reduces to a number between 1 and 9, and each of those numbers has spiritual meaning.

This article will explore the cards of the tarot that represent the number 4.

Six Cards Represent the Number 4 in a Tarot Deck

An individual that has life path number four is hard-working and concerned about stability. Therefore, they have the passion and energy to build lasting results, maintain systems, and do what is necessary. Their personality develops through their efforts to establish themselves in the world.

As reliable people, they embrace traditions, security, financial stability, and logic. Therefore, they become successful through persistence. Since they endure to succeed in life, they overcome challenges thrown in their way by outlasting the challenge and using tried and true methods to succeed.

Each of the number 4 tarot cards exhibit some aspect of this energy.

The Emperor is all about control through power and authority, making his archetype perfect for the expression of this number.

Meaning: The Emperor represents the masculine divine, the essence of command, order, and power. The Emperor archetype is the fourth encounter for the Fool, teaching us how to establish order from chaos, how to shape the natural world to our needs, and how to build civilization.

Symbolism: A elder man sits on a throne with the heads of four rams, which symbolizes his masculinity. He holds an Ankh scepter, representing life and power, and a gold ball, representing earthly wealth and his rulership of civilization. The burgundy cloth around his upper body, and red robe covering his lower body, indicate the energy he wields to maintain his authority. He wears armor underneath his clothing, shown by the greaves and sabatons on his legs. He wears a crown on his head that he earned; it was not inherited.

Upright: authority, the rule maker, order, stability, and sovereignty over society and civilization

Death, while essentially about transition, is one of the constants of life, which makes it ideal to represent the number 4.

Meaning: Death represents endings in the cycle of life and the power of regeneration. Death, as an archetype, is the thirteenth encounter for the Fool. This card reminds us that life is finite, which helps us appreciate how well, or poorly, we are doing in our pursuit of life experience and soul growth.

Symbolism: The skeletal figure of death rides across the land collecting souls. No one escapes his visit, as exhibited by the figures of royalty, the priesthood, a common maiden, and child. His flag has a symbol that is the shape of a rose, representing his role in the cycle of life, also depicted by the rising/setting sun in the background. Death’s arrival is always assured and rarely welcomed.

The Four of Cups is an archetype for contemplation, taking time to review one’s emotions, be at rest, and steadily reflect on important issues and relationships.  Another keen aspect of the number 4 is periods of rest and review.

Meaning: Find some time to meditate, or at least rest; your emotions need soothing.

Symbolism: A man contemplates three cups in front of him while a divine hand delivers a new need he will have to address but does not yet see, feel, or understand.

The Four of Pentacles shows the archetypical energy of conservation and saving.  The number 4 is a “conservative” number, preferring to have a “bird in the hand, not two in the bush”.

Meaning: Be careful with your resources; it’s a good time to save and be conservative with finances.

Symbolism: A man, with a stern look on his face, sits on a stone bench in front of a city background. The four pentacles represent the hard work and serious effort it takes to accumulate wealth and feel financially secure.

Like the Four of Cups, the figure is at rest; the mind is at rest.  He is also shown as a protector or defender, another keen quality of individuals with the number 4 as their Life Path or Destiny number.

Meaning: You need a mental break; you need to disengage to save your sanity.

Symbolism: A warrior rests in a holy temple; there are three swords on the wall above him and one sword by his side. He takes advantage of a period of peace.

The Four of Wands represents the archetype of celebrations earned and shared by a group, community, or society, which usually only happen when hard work and consistent values prevail.  Number 4 energy makes it possible to enjoy such gatherings.

Meaning: Gather friends and family around you and celebrate together.

Symbolism: Two figures approach the four staffs to celebrate an important day or major accomplishment. The roses and grapes in the garland around the staffs show abundance, good health, and richness of the land.

Reversed: unfinished work, and no time to celebrate

How The Elements Create Different People