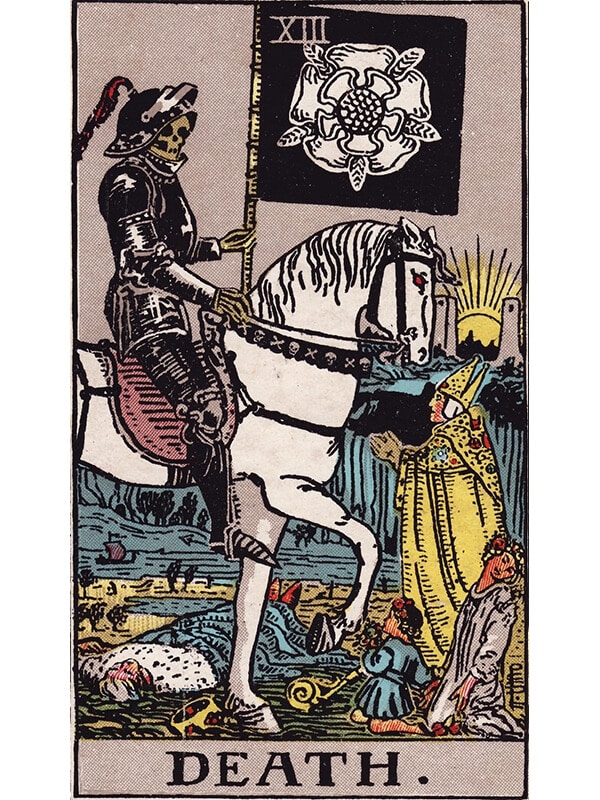 The death tarot card represents a concept that many people dread and try to avoid. Few are those who deliberately seek to die. This is such a scary concept that in one of the earliest tarot decks to reach a wide audience, the Marseille deck, this major arcana was deliberately left without a name.

Astrologically, the Death card is associated with the planet Pluto and the sign of Scorpio.

Wearing dark plate armor and riding on a pale horse, the traditional representation of Death (a grim skeleton) is riding forward, banner in hand, in front of a field. Before him, several victims or potential victims can be found, coming from various social classes (a bishop, a king, a commoner, a child).

However, when paying attention to the details of this morbid tableau, you can find a rising sun on the horizon, and you see that the large banner held in the pale reaper’s hand (on the classic Rider-Waite-Smith tarot) is emblazoned with the Mystic Rose, an occult concept that is a symbol of life.

While in certain contexts, and in association with other minor or major arcana connected to loss or despair, the meaning of the Death card can be as literal as its name, usually it has a far more positive meaning and should be read accordingly.

The number 13 card of the Major Arcana, Death, along with the Tower, is probably the one most everyone does not want to see in a reading about love and relationship. In the modern era, a lot of ink has been spilled and text typed to “soften the blow” of this card, but we all know it means a final ending to something or someone.

If you are single, this card lets you know that some approach or idea you have about relationships needs to die in order for you to find your best match. Human beings can hold beliefs antithetical to their happiness, usually misguided by advice from parents, peers, and popular culture. You will not have success finding your partner unless you identify what belief or behavior you need to “kill” in order to be free of its limiting and self-defeating energy.

If you are in a relationship, this card lets you know it is time to put your relationship “to rest” so you can find the next relationship that will help you grow. In many ways, the Death card shows up to help us recognize when we have learned all we can learn from a relationship. We should honor what the relationship taught us by graciously accepting its ending so we can transform and grow.

Career encompasses school and education if that is your current stage; work that is necessary, but not what you would consider a career path; and your actual career path. Regardless of your current stage of development, Death represents a period of transition about your purpose in life and how that purpose will secure your value and help you be a productive member of society.

If you are a student and this is your card, then you may realize that something about your chosen course of study or degree needs you to transform. After serious consideration, hopefully, you will conclude that you need to “put something to rest” regarding your student life. It is time to mature into a new level of development.

If you are working, but not doing something you would consider a career, then this card will really ask if you need to quit this job and look for something new. You have probably gone as far as you can with your current work and you need to “put it behind you”. It could also let you know that your job is about to die in some way.

If you are in a career path, then this card can push you to rebirth your purpose, your devotion to your purpose, and the value of your purpose based on the reactions and feedback of the world around you. It may be time to restructure your business, bring in a consultant to “upheave” the status quo, or it may be time for you to retire.

The death tarot card is far more negative when it appears reversed in a tarot reading. However, the reversed death tarot meaning is not literal death either, but rather the opposite of the positive forces of transition and change mentioned in the normal reading of the death major arcana. Reversed, it often means a state of inertia, stagnation, or lethargy. A situation in a virtual deadlock. It is a warning that upholding the status quo in a bad situation is often more detrimental in the long term than to suffer loss in the short term in order to move on to another, better situation.

Reversed, this card certainly can indicate a point of no return for the relationship. Something about it must die or has died, and there is no rebirth or renewal energy. The earth has not just been plowed; it has been salted as well. Nothing can grow or come back; really, it is time to move on.

When this card appears reversed in a question about work or career, then you want to make sure you understand that your career has some loss that will not come back. Often this card, in a career reading, indicates obsolescence. It’s not about upgrading or adapting, but realizing something in the work is done, forever.

Having learned how to let go and move in harmony with the world instead of ignoring it, the Fool encounters a form of self-renewal that can be found in the Death tarot card. This is not the literal death of the Fool, or any of their acquaintances, but rather the sign of some kind of ending, the last moments of a cycle.

Like in the Leonard Cohen song, the Fool learns that death is not the end, and that figurative deaths and endings often are nothing but signs heralding the birth of something new. This is where the Fool must learn that change is inevitable, but also that something coming to an end is not necessarily a bad thing. Everything that happens is nothing but a transition from one aspect to another.

Dreaded and scary in a tarot reading, the frightening Death card is nonetheless usually quite a positive major arcana. This is a card that lets you take a step back from yourself and see more clearly the parts of you that need to “die” in order to let your inner self grow. Most things in life can be incorporated into a cycle, and it is often necessary to recognize that transition and change are important to the overall balance of your life.

No matter how dark the representation on the death tarot card is, it is still a very useful tool to be used in a meditation session if you feel that you are currently stuck in a dead end in your life. When you see the pale horseman as an ally coming to help you see what you need to change in order to grow stronger, you can use this metaphor to be slightly more objective with your own life and current situation.

If you can be honest with yourself, you will see the elements of your life that seem to bring you down. Ask yourself how you might change it, and don’t be afraid to give up on some aspects of your life or personality if it means you will rise all the greater from their ashes like a phoenix.

First Quarter Moon
The moon is currently in Capricorn