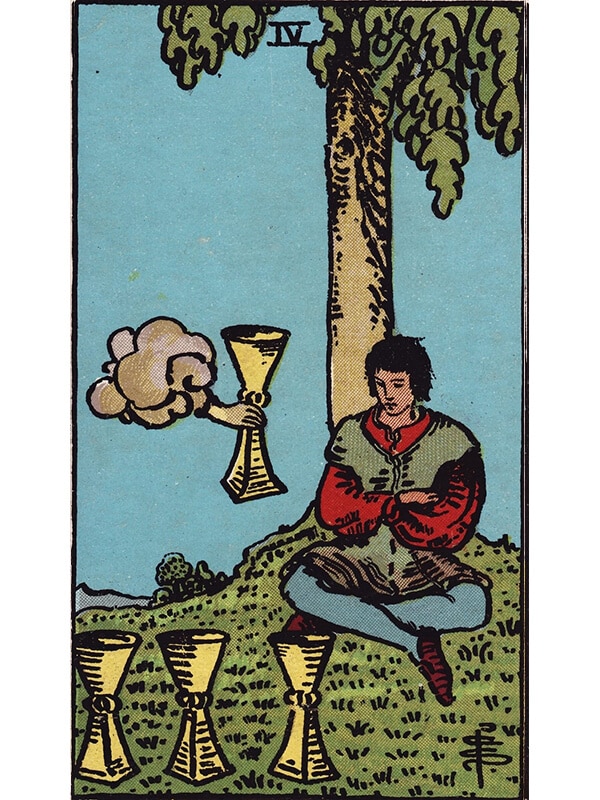 Reversed: depression, boredom, stagnation, emotional burnout, and resisting any change, and living in the past.

In modern interpretations, the card ranges from something positive, suggesting the Querent take a rest, relax, and contemplate his or her current situation. Other modern views suggest the card is one of “mixed happiness”, introducing doubt or concern, which gets amplified if the person ends up a long for a long stretch of time. Mostly, newer versions represent a figure in meditation, conserving emotional energy, and turning inward.

In stark contrast with the happy and joyful iconography of the two and three of cups, a single figure is drawn on the RWS tarot deck version of the Four of Cups. A young man is sitting legs crossed, alone, next to a tree. Three chalices are displayed before him on the floor, and a fourth one hovers right before him, offered out of thin air by an ethereal hand appearing from a little cloud. Neither the initial set of choices or the unexpected fourth option provided seem to satisfy the young man, arms crossed in refusal and withdrawal.

The suit of cups is meant to represent the emotional side of life. There is nothing much to say about the positive elements of the Four of Cups from the Rider Waite deck, which is one of the few clearly negative cards to be found within the tarot deck.

Here, the minor arcana card channels more negative emotions like boredom and ennui. A lack of motivation and interest had stuck the young man in the picture in a dead-end, impossible to choose between three similar options standing before him, and even the magical arrival of another solution out of nowhere does not seem to be enough to coax him out of this withdrawal from the world.

In a professional context, this card could hint at a serious lack of inspiration that might cause frustrations and delays in the workflow process. Even worse, it could herald a time of clinical depression and apathy after losing faith in the world at large or for any other reason.

Career encompasses school and education if that is your current stage; work that is necessary, but not what you would consider a career path; and your actual career path. Regardless of your current stage of development, the Four of Cups is about reviewing your feelings about school, work, or career.

If you are a student and this is your card, then it is time to take a break and withdraw. If you are in the middle of your school year, then use the upcoming weekend to disengage. If you are between one year of school and another, contemplate your feelings about your academic goals. Are they the same as they have always been or do they need to change?

If you are doing work that is necessary, but not a career, then you want to take some vacation time or sick leave (which may apply) and use the time to recharge and rest. If you do not take a break, you could experience burnout.

If you are in your career, then the Four of Cups encourages you to take a step back before you hit a burnout phase. One way or another, you need to disengage and recharge before you are unable to perform because your emotional energy is completely drained.

Reversed, this card can show up to warn you about anxiety or depression or frustration reaching a point where your daily life and relationships will be negatively affected. Heed this card’s warning!

You may be paralyzed by the inability to make a choice because your emotions about the situation or issue are confused and unclear. You may be unable to make a decision, probably for lack of deep emotional connection and commitment like the one that could be found in the Lovers card.

Reversed, this card suggests some frustration or anxiety regarding the relationship. You are not feeling the fun or joy from, towards, or with your partner. It may be just a minor bump in the road or a clear sign it is time to end the relationship. If you ignore the warning, the matter will only get worse.

In a professional context, a reversed Four of Cups would indicate burnout and apathy regarding your schooling, work, or career. Instead of getting the warning ahead of time with the upright Four of Cups, you now have to figure out how to get out of the depressing or anxious energy before falling deeper into the hole.