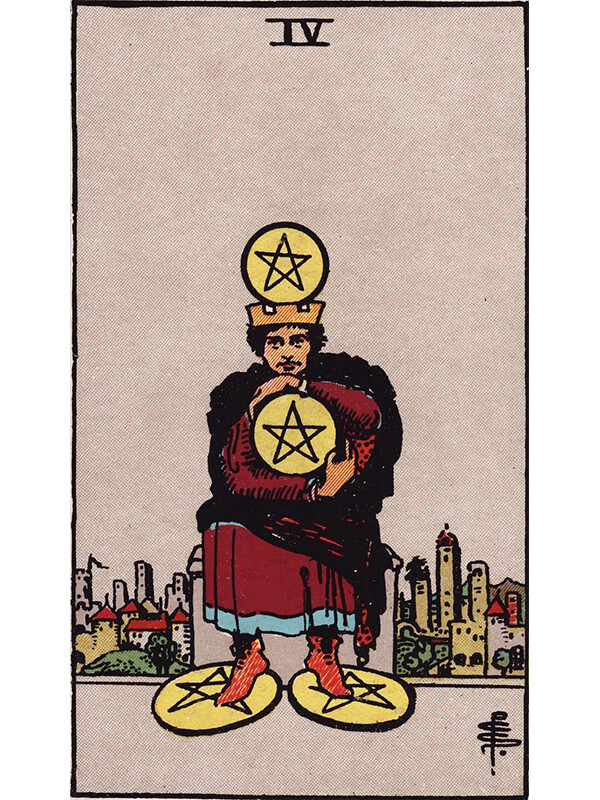 Upright: conservatism, saving money, protecting something or someone, and managing resources

Combined with positive cards and in a professional or material context, the Four of Pentacles represents a safe and conservative outlook in dealing with resources and energy. This card focuses on security and stability, and as regards the Querent’s financial situation this card also advises saving up and building comfortable assets for a long-term strategy.

The illustration for the Four of Pentacles in the Rider-Waite tarot almost looks like the illustration for a court card. The main character is a king, with a crown, sitting hunched on a small throne that, at second glance, could be a large house or church that would fit the rest of the background, a rather busy town full of buildings, but it a smaller perspective as if the king was a giant like in Gulliver’s travels.

In this suit of Pentacles, the king has one pentacle beneath each foot, one on his crown, and the final one held tight in both hands, protectively. He obviously does not want to let it go.

Like the overprotective king on the illustration, the Four of Pentacles in a tarot reading is usually a symbol for saving money or being particularly cautious with the use of various resources available. By extension of this concept in a figurative sense, the Four of Pentacles also represents conservative values and ideas, focusing on safe and low-risk investments or endeavors while shying away from anything bold, new, or untested.

If the Four of Pentacles is combined with more “social” cards in a tarot spread, the conservative elements can be adapted in that context too, dealing with someone who would rather spend time with longtime friends instead of meeting new people, or someone feeling responsible for someone else.

This responsibility can take many forms … like an adult taking care of a child, or a good friend managing one of their friends that might have a hard time staying sober or doing the right thing in a social environment, acting like a caretaker or the incarnation of that person’s conscience like an angel perched on their shoulder.

The extremely material aspect of the Four of Pentacles usually does not mesh well with a love-based tarot reading. It might represent a relationship where one partner is more interested in their own finances and love of money than about the other person in that relationship.

It might also point fingers at some kind of deliberate control over the other person, who ceases to be a human being in their eyes and becomes just another resource to be collected, hoarded, and isolated. As such, this is usually considered a rather negative card to draw in a love-based spread.

Career encompasses school and education if that is your current stage; work that is necessary, but not what you would consider a career path; and your actual career path. Regardless of your current stage of development, the Four of Pentacles represents an accumulation of knowledge, money, and resources.

If you are a student and this is your card, then you need to think about what you have built and are building through your studies. Your degree becomes a solid support for your material goals in life since it should provide the means for you to earn a living and provide a productive skill to society.

If you are doing work that is necessary, but not a career, then you want to make sure you are making more than you are spending and that you have some kind of investment for retirement. If work is not providing you enough income, then you either need to work harder, smarter or both.

If you are in your career, then the Four of Pentacles represents the reputation you have built and are building that keeps you on solid ground, while also allowing you to save and invest money for greater abundance and opportunities in the future. What wise and conservative choices do you need to make now to ensure you are still in your career 10 or 20 years from today.

The reversed Four of Pentacles meaning in a tarot reading deals with the downsides of conservatism and protectionism. As such, it is usually the sign of excessive greed, trying to hoard as many resources and valuables as possible without any regard for consequences that do not affect you directly. It is a sign of putting yourself first without caring about others in the equation.

The excessive greed of a reversed Four of Pentacles also has serious consequences on the social and economic context, since the urge to save every penny slows down the economy. This also echoes the image of a snake eating its own tail, as usual, the ones with an already larger share of the resources cake tend to be those who are the least generous with it and who keep wanting for more and more.

Reversed, this card indicates that you or the other person are not as stable as you think, financially and materially speaking. It is possible that one or both of you is hurting the relationship with debt, overspending, or too much financial risk. You do not want this card to “be reversed” for long; otherwise, you could end up in serious financial trouble that will affect your relationship negatively in the long run.

When this card appears reversed in a question about school, work, or career, then you need to look at the value of your course of study, the stability of your current job/industry, and the foundation of your career goals and assets. You may be facing significant instability that could disrupt your studies, work, or career. What do you need to do to minimize risk and get this card “upright” again?