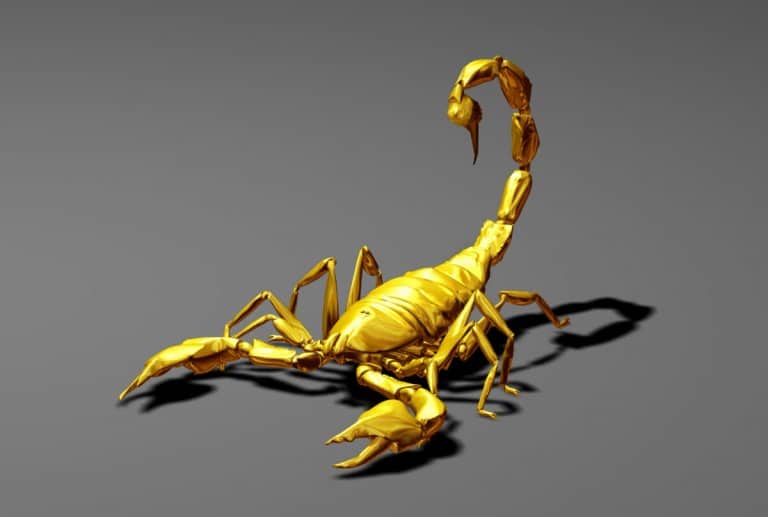 Most of us know our sign of the zodiac, but what does its constellation look like in the night sky, and what’s the story behind the sign? Around October 23 this month we enter the sign of the Scorpion.

Its name is Latin for scorpion, and it is one of the 48 constellations identified by the Greek astronomer Ptolemy in the second century. Like Aries, Taurus, and Leo, it is an ancient constellation, recognized as such pre-dating the Greeks.

Scorpius is the southernmost of all the constellations in the zodiac and lies between Libra to the west and Sagittarius to the east. It used to be bigger, but its claws later became part of the constellation of the Romans named Libra.

Its brightest star, one of the brightest of all in the night sky, is the ‘heart’ of the scorpion, Antares, meaning ‘rival of Ares’ (the Greek name for the Roman god of war, Mars) It is so-named because it is bright reddish in color, like Mars, and also because Scorpio’s ruling planet was Mars until Pluto was discovered in 1930. Now it is considered co-ruled by both Mars (The Warrior) and Pluto (The Transformer)

Scorpius contains many bright stars and some interesting exo-planets. One is extremely old, and more than one is considered potentially habitable. The planet PSR B1620-26 b is sometimes nicknamed “Methuselah” being estimated at 12.7 billion years old.  (The universe is about 13.7 billion years old.)  Methuselah is vast, with a mass about twice that of Jupiter and it orbits around not one, but two stars.

“Habitability” is defined as a rocky world that is close enough to its parent star for liquid water to exist on the surface, though other factors may later rule it out, such as the variability of its star, or the composition of the planet’s atmosphere.

Nature, Religion and astrology were intertwined in the ancient world, and the scorpion has been here far longer than we have – hundreds of millions of years, more than 450 million, as compared with our six million or so.

Sometime around four thousand years ago the Babylonians looked up, discerned the brightly leaning J- shape in the summer stars and called this constellation MUL.GIR.TAB – the ‘Scorpion’, literally read as ‘the (creature with) a burning sting’.

The movements and relative positions of Scorpius were mapped by Babylonian magicians and astrologers, who left written records of the omens they observed.

“When a halo surrounds the Moon and Scorpio stands in it, it will cause men to marry princesses, (or) lions will die, and the traffic of the land will be hindered.”

A comet appearing in Scorpius was read as a warning of a plague, but when the Sun rose in Scorpius, alchemists saw their one chance for the transmutation of lead into gold.

In Greek mythology, the scorpion refers to a story about Orion. According to one of these myths, Orion boasted to his friend the goddess Artemis and her mother, Leto that he would hunt and kill every animal on Earth. Demeter, the goddess of Earth decided this was completely unacceptable behavior.

Zeus was much impressed by the scorpion’s battle spirit and raised the scorpion to heaven and at the request of Artemis; he did the same for Orion.

In other cultures, it is not seen as a scorpion. In Indonesia, it is the Banyakangrem – “the brooded swan,” or the Kalapa Doyong, meaning “the leaning coconut tree.” In Hawaii, it is The Fishhook of the demi-god Maui.

In Chinese mythology, the constellation is part of the Azure Dragon.

And yet, there is consensus across not only continents but hemispheres. Thousands of years before the Greeks and Romans established their societies, the Australian Aboriginal people also saw the stars of Scorpius as a cosmic scorpion.  The celestial scorpion was known to the Aztecs of Central Mexico, and the Lowland Mayans had scorpion constellations. These may match up with the Scorpion of the zodiac, but there is no clear proof. Among the Mayan people, the Scorpion and its astral associations were called ‘Sinan’ (scorpion). It is thought that the Mayans viewed the celestial scorpion as an eclipse-causing agent.

The identification of the constellation Scorpius with a living scorpion in a variety of cultures seems remarkable, considering the different locations and historical settings, offering an insight into the significant interplay between animal imagery, astrology, and religion in the ancient world.

The arrival of Scorpio’s sign in the northern hemisphere coincides with the advent of mystery, the fast fading autumn light, and the ghosts, myths, and superstitions of Halloween, or All Hallows Eve, hence its association with the Tarot’s Death Card.

Like the other water signs, Cancer and Pisces, Scorpio is considered clairvoyant. or at least, keenly intuitive. But Scorpio has a far greater intensity.

This is water behaving as steam, while not overlooking the venom of its sting.

Scorpio rules the eighth sign of the zodiac, to do with Birth, Sex and Death.  No wonder they can be intense, and sometimes full of contradictions– independent but clingy, loving but cold, authoritarian but risk-averse.

They are watchful but keep their emotions hidden. Born investigators, spies or secret agents, they are shrewd judges of human nature, while less conscientious Scorpio subjects may make use of this to their advantage and have a tendency of dropping friends whom they no longer see as useful.

But combined with a determination and loyalty where they do accord it, Scorpios can make great leaders, scientists, and devoted doctors. They are quick learners, very adaptable, often changing careers, going down new paths.

When wronged, they do not forgive. Scorpio is vengeful…and also patient. But they never forget a kindness either. They do not quickly forget, either way. Scorpio subjects are careful with money but when they do spend it, they tend to make good choices, investing wisely.

Next time… the story of the Sagittarius.

Book Review: I Ching: A New Interpretation for Modern Times by Sam Reifler