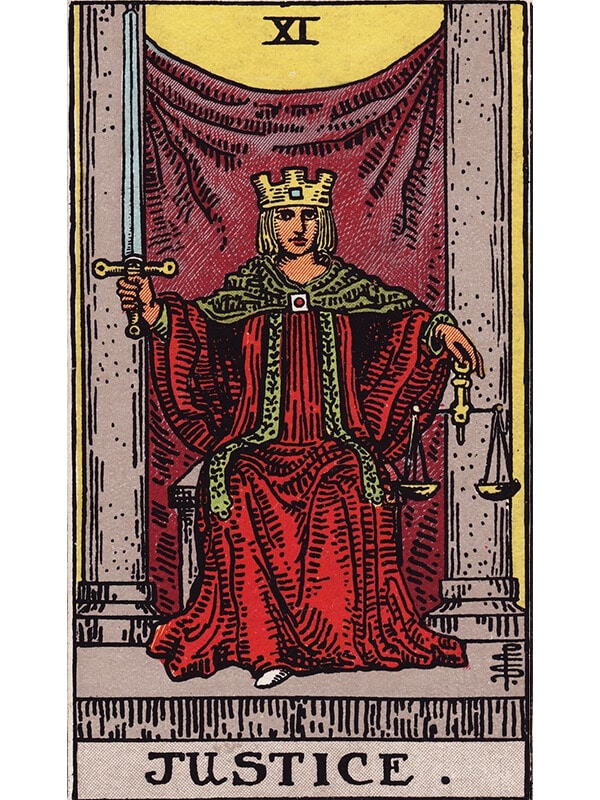 Tarot cards often embody great concepts that are particularly important and hold society together. The justice tarot card clearly fits that profile, since the use of fair laws and regulations that settle problems according to clear and objective criteria is one of the things that separate humankind from other animal species.

Astrologically, the Justice card is associated with the planet Venus and the sign of Libra.

Like the High Priestess and the Hierophant, this is another example of a major arcana drawn using the main character sitting on a throne between two pillars. Here, the character is very often female and bears the two most recognizable tools that are usually attributed to the concept of Justice in traditional paintings and sculptures: a sword and a pair of scales.

It can be noted, however, that contrary to many depictions of Justice, the figure on the throne does not wear a blindfold (traditionally used to mean that Justice is, and should be, blind). The reason why might be partly explained by the actual meaning of the card.

Predictably enough for a card with this name, the Justice card meaning is connected to the concept of justice, in every sense of the word. But Justice in tarot is not necessarily as impartial as Justice must be in a court of law. Indeed, this card deals with Justice on a more subjective scale, where what is right matters more than the letter of the law.

As such, the meaning of the Justice card is also one of righteousness and calls for the triumph of the deserving side in any dispute. This is a kind of Justice that does not do what it should do by the book but does what is right.

The number 11 card of the Major Arcana, Justice, represents the detached judgment we need to use to analyze our feelings about love and romance. Has the pursuit and experience of both been healthy or unhealthy for us? If we step outside our experiences and look at them to determine if they were good or bad, what do we see?

If you are single, this card will ask you to be the judge of what you want in love and romance and expect you to uphold your standards or suffer the unpleasant experiences that often come with hypocrisy. This card is not concerned with or at the mercy of emotion; it is cold, calculating energy that is unimpressed with the messiness of love and romance.

If you are in a relationship, this card might be letting you know it is time to hire a lawyer, mediator, or psychologist. Less dramatically, the card certainly expects you to assess your relationship with analytical calculation so you can make the wisest decision needed to keep the relationship going or to leave it.

Career encompasses school and education if that is your current stage; work that is necessary, but not what you would consider a career path; and your actual career path. Regardless of your current stage of development, Justice represents the testing you must go through to prove you are learning what is being taught, the evaluations of your work performance, and the success or failure of your career goals.

If you are a student and this is your card, then you need to review your grade point average (GPA) and think about how you are doing against the judgment of your instructors. Pulling the Justice card indicates that the time for testing and proving is upon you. How will you measure up?

If you are working, but not doing something you would consider a career, then this card will indicate that it is time to be evaluated and see if you are still improving, need improving, or need new work. From time to time we need to determine if what we are doing is what we really want to be doing if it is still something worth doing, and, maybe, finding out we no longer need to be doing it.

If you are in a career path, then this card can get you thinking about the state of your achievements up to this point. When you evaluate your industry, your role in it, and future goals, are you “on balance” to achieve them. If you look objectively at your accomplishments and future prospects, do you see prosperity, staying the course, or a need for dramatic change?

The Justice card has quite a different energy when it is reversed, like in most major arcana meanings. Indeed, this is where a more sinister aspect of the concept of justice can be seen in this major arcana, yielding authority to the most down-to-earth aspects of justice, following the letter of the law rather than its intent.

The reversed Justice card might also be a sign of legal complications or matters of bureaucracy, when paperwork and red tape can turn the concept of justice on its head, releasing the perpetrator and punishing the victim. On a more conceptual aspect, this reversed major arcana can also represent bigotry and severity, judging people for who they are instead of what they have done.

Reversed, this card certainly can indicate indecision or a poor decision about or within the relationship. If there is a decision to be made, it might be best to delay the decision and revisit your choices. You may feel there is some aspect of the relationship that is unfair or out-of-balance. Something is amiss and you should find out what before making any crucial decisions.

When this card appears reversed in a question about work or career, then you want to be careful about signing any contracts. You also want to make sure that insurance and legal support are up-to-date, just in case there is a legal issue unfolding right now or on the horizon. Consider getting additional input about any decisions that need to be made; having the sole responsibility for a situation may not go so well.

The Fool now takes some time to look back and digest all the lessons learned so far. The wonderful tapestry glimpsed during the lesson of the Wheel of Fortune has unveiled a wider system of causes and consequences, and the Justice tarot card reminds the Fool that they need to take responsibility for their actions and be righteous and honest with themselves.

The card is aptly named because this is meant to fill the Fool with a strong sense of Justice that will ensure the rest of their journey is meaningful and does not bring any unnecessary harm to anyone else or to the world at large.

In the Marseille deck and most early Renaissance tarots, Justice was numbered 8, and Strength was numbered 11. The deliberate inversion of these two arcana in the most modern deck is the fruit of numerological and historical studies about the tarot from various secret societies at the end of the Victorian era.

These days it seems that this sense of righteous belonging in a greater world is slowly disappearing from the list of priorities found on the desk of those people at the helm of nations or great corporations. Greed, individualism, and a clearly accepted shortsightedness seem to set the course of global growth without any long-term view or empathy towards those in need.

The world is in dire need of a sharp waking call unless they want to forget the lessons of the Justice tarot card and spell their own doom by being blind to the consequences of their selfish actions.

Justice in tarot is here to draw the line between right and wrong, and favor the right side in spite of any technicality or jurisprudence that might stand in its way. It urges you to stand for what is right and will show you the best way to make sure you get the support you need to see true Justice triumph.

These days it seems that this sense of righteous belonging in a greater world is slowly disappearing from the list of priorities found on the desk of those people at the helm of nations or great corporations. Greed, individualism, and a clearly accepted shortsightedness seem to set the course of global growth without any long-term view or empathy towards those in need.

The world is in dire need of a sharp waking call unless they want to forget the lessons of the Justice card and spell their own doom by being blind to the consequences of their selfish actions.

The Justice major arcana works well as a focus for meditation when you need to center yourself again, or solve some inner conflict in your mind when you do not know what the right move is. When you focus all your attention on the justice tarot card and think about this problem, you should soon realize that one path is obviously the right one over the other. When you strip away outside elements and distractions, Justice makes everything clearer and shows you what is right, beyond the shadow of a doubt.