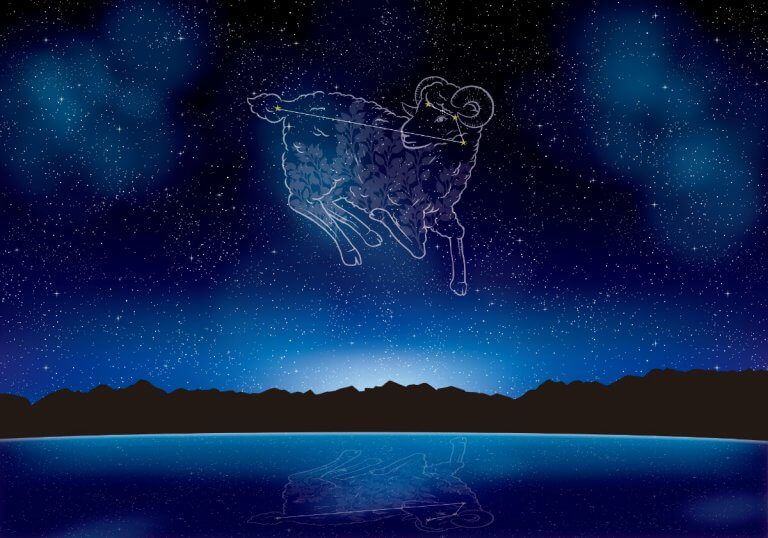 Most of us know our sun sign or sign of the zodiac, but what does it look like in the night sky, and what is the story behind it? This month it’s the turn of Aries the Ram, the first sign of the new astrological year…

Astronomy: Where is Aries Located

Aries is located in the Northern Hemisphere between Pisces to its west and Taurus to its east.

The brightest star in Aries is Alpha Arietis, or Hamal, from the Arabic Al Ras al Hamal, meaning “the Head of the Sheep.” Hamal is a red giant with a magnitude of 2.0, visible to the naked eye, which is about as bright as Mars when the planet is at its farthest point from Earth.

The two bottoms stars in the photograph are the stars Beta Arietis, also known as Sheratan, a blue-white star, and Gamma Arietis, also called Mesarthim, a whitish binary star with two components. These are the horns of the Ram, and their names mean the Two Signs, meaning the two signs of spring.

This is because the sun moves westward in front of the backdrop constellations by about one degree (two sun diameters) every 72 years. This drifting is due to a motion of Earth, a wobble on its axis, called precession of the precession of the equinoxes.

2,500 years ago, the annual conjunction of the sun and Hamal happened right on the March equinox, and this was the data used in the astronomer, mathematician and astrologer Ptolemy’s design of Western astrology in the 2nd Century AD.

But for historical reasons the spring/vernal equinox is still referred to as the First Point of Aries.

The Aries constellation contains a galaxy about 100 million light-years from our own galaxy, the Milky Way (our home galaxy) and a planetary system called 30 Ari, which consists of a gas giant and four stars.

A supernova in Aries was recorded in May, in the year 1012 AD.

The best time to see Aries

Look for it in December around 9 p.m. local time, rising in the east. A Northern Hemisphere spring or Southern Hemisphere autumn is the worst time of year for viewing Aries when it is lost in the sun’s glare. December is an especially good month for viewing Aries when the Earth is on the other side of the sun. In late October, Aries rises in the east at sunset reaches its highest point in the sky at midnight and sets in the west at sunrise.

The spring equinox was a time of renewal throughout the northern half of Earth, an event of great significance to people who were much more aware than we are nowadays, of human dependence on the land and sky.

Once upon a time Aries marked the end of the wild sheep main lambing season in Europe, 21 March – 20 April.

The Sumerians are one of the oldest known urban civilizations in what is now called Southern Iraq, during the Neolithic-Bronze Age, 4500 BC to 1500 years BC. The ancient Sumerians called the sun, Subat, meaning the Ancient Sheep or Ram and the planets were the Celestial Herds.

In ancient Egyptian astronomy, Aries was called Lord of the Head, referring to its symbolic significance, and it was associated with the god Amon-Ra, who was depicted as a man with a ram’s head and represented fertility and creativity. Because it was the location of the spring (vernal) equinox, it was called the “Indicator of the Reborn Sun”.

The position of Aries at the zenith coincided with the rising of Sirius in the east and the flooding of the Nile. The Temple of Amon-Ra at Karnak bore the likeness of the supreme sun-god with the horns of a ram. The road to Karnak was formed from the wings of two granite sphinxes bearing the head of Aries.

However, Aries was not fully recognized as a constellation until classical times when the ancient Greeks from about 1580 B.C. to 360 B.C. oriented the construction of many of their sacred temples in relationship to Hamal.

In Hellenistic astrology, the constellation of Aries is associated with the golden ram of Greek mythology that rescued Phrixus and Helle on orders from Hermes, taking him to the land of Colchis.

The brother and sister Phrixus and Helle were the children of the Boeotian king Athamas and the cloud fairy, Nephele.  She died, the king remarried, and his new wife, Ino, feared and hated them and planned to kill them as a perceived threat to her own two children by the king.

They fled, rescued by a flying golden ram sent by Hermes at the plea of the dead Nephele, watching in anguish from the other world, but Helle fell into the sea below and was lost in the Dardanelles, named the Hellespont in her honor. Later, safely in Colchis, Phrixus (rather ungratefully) sacrificed the Golden Ram, returning it to the gods, and presented its fleece as a gift to King Aeetes, who placed it on a tree in a grove under the guard of a dragon, the hideous Hydra, whom Jason later killed in order to steal the magical healing fleece.

There is no such thing in reality as THE Aries personality and the same goes for all the zodiac sun signs. Your sun sign is an archetype, a keynote, but of course, it is not your full astrological portrait. We are all unique and it could never be the whole story.

Aries is number one, the first sign in the Zodiac, youthful and exuberant. But it is also the sign of a king, and not only that but a warrior-king, as illustrated in the watchful, slightly weary, Emperor card in the Tarot. See those Ram’s heads decorating his throne?

Aries is ultra-virile, with a warrior spirit, just as a ram will charge headlong, at an intruder, and may even kill a person who enters his field, threatening his ewes and his territory at the wrong moment.

Aries is known for its determination and zest for life, and in the same spirit, Aries can be reckless and with it, accident-prone in its general haste to get on and do whatever is the next thing. Aries are at a statistically increased risk of accidents, especially with head and neck injuries in comparison with other signs, largely due to impatience and risk-taking behaviors.

Aries is ready to experiment or pioneer but may not finish what it starts. They are determined but can be diverted by their own impatience if they don’t get quick results.

Aries subjects may exhibit careless or even ruthless behavior with a disregard for others in their desire to achieve and excel. They can bear grudges but, though they are sensitive, they are prone to be careless about the sensitivities of others.

In their personal relationships, Aries are lively, pleasant, frank, direct and generous. Full of bounce and joie de vivre, there is much to admire about the early springtime subjects of fiery Aries, the Mighty Ram.

This is the final articles in this series about the science and history of the Zodiac. Browse the archives for the story of next month’s zodiac sign Taurus, and all the other signs of the zodiac.