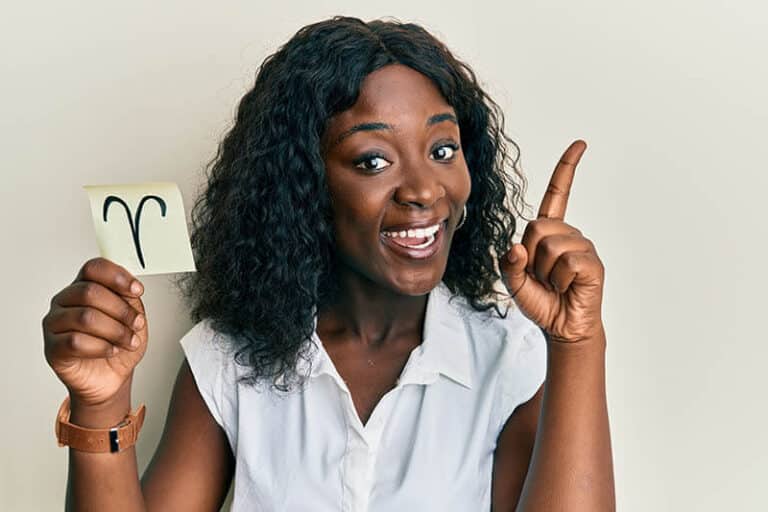 Aries is the first sign in the zodiac, their keyword is “self”, Aries is giving, but they certainly put themselves and their own needs as their main focus. Aries will need to be okay with themselves in order to help you, Aries may try, but unless they are 100% okay, they won’t be able to properly emotionally support you. Aries acts like they have no emotions, at least not tears. Those are only saved for very special occasions. The first emotion Aries will actually go to is frustration or anger, as many Aries have been known to lose their cool at times.

Aries is generally positive and upbeat unless they are dealing with an emotional matter or they are under stress or anger. Aries would rather be positive about things, even when they are stuck in a negative situation. Aries is very hard-working and ambitious, they set goals for themselves, which they work hard to obtain. They tend to have high expectations and high standards, Socially, they can really excel, smart and powerful, Aries knows how to make an impact on others with their amazing ability to connect with everyone if they want to. Don’t get it twisted, Aries wants to be number one and they want to win. They will walk over to you to get what they want (if they need to). They actually do want to be better than you. Sorry, they just can’t help it. They are highly competitive and long to be the best out there. They care about their reputation and defiantly want to be remembered as great.

Sometimes it feels like work is more important to the Aries than love, and for some it honestly is. Some Aries is defined by what they do and what they do well. Aries will always be working their way upward and into a better working position. Aries wants the power, and Aries wants to be boss. They want to run a business that is powerful, popular, and successful. Aries is usually the ideal student and will get the grades to protect their future. They are the type to do school beyond University, often taking courses that will specifically advance them in their career. If career is not going well, Aries is frustrated. Work has always been the driving force in Aries life, and If they don’t have that they feel incomplete. Aries could be really successful at something, but might always think the grass is greener on the other side. A part of them thinks there is more or better out there and they can’t help but feel unsatisfied if they don’t remember to count their blessings.

Aries isn’t a lovesick Pisces, as mentioned they care about establishing themselves before love, but if they can have both, they will take it. Aries might even be the time to roam alone by choice.  Aries loves attention and they love good sex, but they won’t tolerate poor treatment. They won’t chase you. They expect you to chase them, and even if they do it doesn’t mean Aries is truly into you. Aries will see the folly of their partner, and this will be a problem. They want to date someone that others are practically envious of. They want an important or impressive partner that completes their greatness. The talk of other people will influence Aries’ love. If other people are talking up their partner, it will make them care even more for their partner.

It’s not impossible for an Aries to cheat. Many of them have a high libido and If they don’t feel like their needs are met they may look for them elsewhere. Aries is able to hook-up without emotions.

Aries as a Friend

Aries will seem like they are friends with everyone and know people all over the city, and they do, but there are only a select few that Aries actually confides in. Some Aries like to be open books, while other Aries are very private and very private about their emotions. Aries is a good friend, as long as they are doing well. Aries can be a great source of positive and constructive energy. When they care for you deeply, there isn’t much they would not do for you. Aries has a big heart behind their “nothing phases me” front. They do care, and they will try to be there for you, even when things are grey, Aries has what it takes to be friends for the long haul, it is rare for them to ever give up on the people they sincerely love. They might have to set boundaries with some people but that doesn’t mean that Aries will stop being caring or stop being friendly. Aries is the type, like Pisces who could see the good in everyone, as they see a purpose for everyone, and feel every human deserves to be treated with love and respect.

Advice for an Aries Lover

Don’t smother them. Know they are there for you but don’t take advantage. Remember as much as you need Aries’ help, Aries also needs you to listen to them. You have to understand that they have big dreams, and when things get in the way of their dreams, it frustrates them. Aries is almost used to getting what they want so when they suddenly don’t, it can cause problems. Aries needs to be heard, so when they speak, you better listen. Some would say Aries is bossy, but it’s more so that no one can tell Aries which way to go. Aries will decide for themselves what is best for their situation. Aries is like the captain of the ship looking for their perfect first mate. It doesn’t mean that they don’t care about your feelings but if you are a little laid back, passive or feminine that might really work for the Aries.