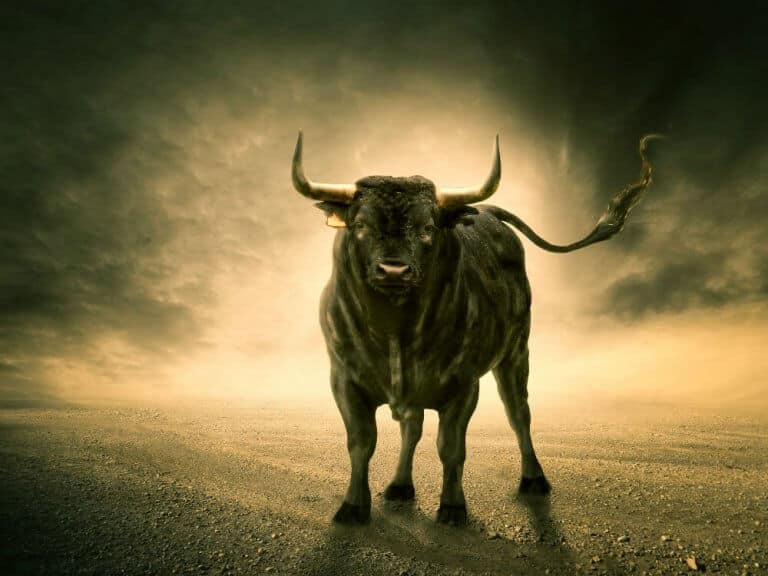 Most of us know our sign of the Zodiac. But what does it look like in the night sky, and what’s the story behind the sign? Today let’s look at Taurus.

Taurus (Latin for Bull) is a large and prominent constellation in the northern hemisphere’s winter sky between Aries to the west and Gemini to the east. It ranks 17th in size of the 48 Greek constellations recorded by Ptolemy in his introduction to the Mathematics of the Heavens, the Almagest written AD 150.

The stars of Taurus depict the face, horns, and forepart of the bull’s body. His face is made up of a triangular cluster of stars called The Hyades. There are no legs. The bull is imagined half-submerged. A second great cluster of stars, The Pleiades, also known as The Seven Sisters, look like a swarm of flies above his back.

The best time to observe Taurus in the night sky is during the months of December and January. By March and April, the constellation appears to the west during the evening twilight.

To locate Taurus first find the three stars of Orion’s belt. That’s easy on a clear winter’s night. Now, look up to the right, looking northeast, See that bright orange-red star? This is Aldebaran, ‘The Follower,’ a red giant, the biggest, brightest star in the constellation, famous red eye of the Bull, glaring in the direction of Orion, below Taurus, looking southwest.

Should the Bull escape his heavenly pen, said an ancient Arabic legend, he would stampede the universe to pieces and it would be the end of things for all time.

Let’s hope nothing upsets him.

Wiki Commons: the horns, face and the giant red star, Aldebaran, the Eye of the Bull, glaring menacingly in the direction of Orion the Hunter

Taurus has been recognized as a sky bull since at least the Early Bronze Age. Historians think the figure of a bull was first discerned in the stars by the Sumerians around 3000 BC and was recorded in cuneiform by the Babylonians.

The Bull was also the first sign for the early Hebrews, who called it Aleph, as in A, the first letter of the alphabet.

The bull, like its ancestors, the wild aurochs, is a potent symbol of strength and fertility, but where Leo the lion, represents wild strength, Taurus the bull is domesticated, controlled strength, closely associated with agriculture. One of the several archetypes associated with Taurus is ‘The Farmer,’ and many a bull has worn a ring through its nose for the sake of the farmer’s safety.

The bull has exerted a magical influence on human imagination even before the dawn of agriculture. Aurochs, the fiercer, wild ancestors of the modern bull, were painted in the Lascaux caves in France, in paintings thought to date from 15000 BC.

The most famous section of the Lascaux caves in the Dordogne in France is the Hall of the Bulls, featuring four black bulls, or aurochs. One of the bulls is 5.2 meters (17 ft) long, the largest animal discovered so far in cave art.

It is thought that the aurochs migrated at this time of year; a dangerous but potentially highly rewarding hunting opportunity. Not only did the aurochs provide the luxury of meat, but the horns and hide had many uses.

Hunting gradually gave way to the farming of animals, which guaranteed supplies with less risk attached, as animals were gradually domesticated. The first ever cattle, goats, sheep, and pig farming began in the so-called ‘Fertile Crescent;’ a region covering eastern Turkey, Iraq, and south-western Iran about 12000 years ago. This then expanded westwards and in time had a genetic effect on the human population, with the sudden appearance of a gene mutation that enabled humans to digest raw cow’s milk.

The Cult of the Bull and related Worship

The bull, in particular, was considered a divine animal throughout antiquity and was a symbol of the moon, fertility, rebirth, and royal power, while today, the Lithuanian word ‘Taurus’ means ‘noble.’

There is evidence of bull cults throughout the Mediterranean starting in Anatolia, dating from at least 70000 BC. From the worship of the Apis bull in Egypt to bull-leaping in Knossos and the sacrificial portrayal in Roman Mithraism, the bull has been an integral part of many diverse and important religious traditions.

Greek legend associated Taurus with the legend of Zeus and Europa, in which the god Zeus, disguised as a beautiful, gentle white bull, coaxed the princess Europa into climbing on his back, then swam away with her to Crete and made her one of his mistresses. He gave Europa gifts including a dog that later became the constellation Canis Major. Their children supposedly included Minos, King of Crete, the builder of the Labyrinth and the famous palace at Knossos where the bull games were held.

Bull worship, or rather, the concept of the bull as divine concept gradually migrated ever westwards and northwards. The Celtic druids held Tauric festivals at least 2000 years ago, and there is archaeological evidence of bull worship near Newcastle and York in the UK.

In Buddhism, legend says Gautama Buddha was born when the Full Moon was in Taurus (Vesak) and his birthday is celebrated at the Vesak Festival which occurs on the first Full Moon in Taurus.

Beware of the bull

Like the Bull himself, the classic Taurus, male or female, is generally peaceable, pleasant, even placid. But Taurus is famously stubborn, just as they have great powers of stamina and endurance, they may be coaxed, but will not be pushed or driven, and, pushes the limits once too often…they can ‘see red.’

Bulls cannot actually see red. It is the movement of the toreador’s cape that provokes them, and not the color. But when the human bull ‘sees’ red, they charge head-on.

Taurus is not usually bad-tempered and doesn’t get angry quickly, but in astrological lore, the normally pleasant, placid Taurus in a full-on rage is the only sign capable of demolishing Aries, Leo, and even Scorpio. Taurus in a rage can be ‘a bull in a china shop’.

If Taurus is being a ‘bully, then stand your ground and give the bull a sharp smack on the nose. But otherwise, why do you need to upset the Bull? Look at him, quietly grazing. He’s not looking for trouble. Tread politely in his meadow, do as you would be done by, and everything should be buttercups and daisies.

First Quarter Moon
The moon is currently in Sagittarius