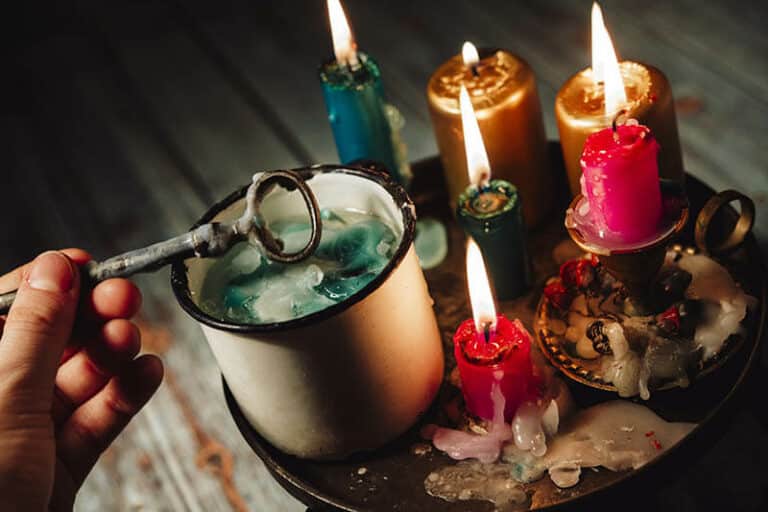 There are many forms of divination. The “Big Three” are astrology, tarot/oracle cards, and numerology. Also well-known are palm reading, I-Ching, channeling, and mediumship. This article, however, will explore and briefly describe uncommon forms of divination that you may find interesting to discover and explore. They will be listed alphabetically, and the list is surprisingly long, even if it is not comprehensive, which is why it will be presented in a series of articles.

The dictionary definition of the word divination is, “the practice of seeking knowledge of the future or the unknown by supernatural means.” In current times, divination has expanded to include spiritual insight about the self and circumstances, with less of an emphasis on predicting the future. The techniques and tools listed below show the many different ways divination can be practiced, whether you are trying to peer into the future or your own soul.

Apantomancy is divination based on chance encounters or sudden insight from a seemingly random occurrence that the diviner understands as a divine message from spirit. Of especial value are unexpected interactions with animals, which appear as totems that answer questions or concerns for the diviner or the person asking a psychic to explain what it means that a certain animal “crossed their path.”

Augury is the practice of divining the future based on the behavior and flight of birds. Historically the practice was essential as a part of the decision-making for the leaders of Rome. Birds were a symbol of Jupiter’s will, so no major action or important judgment would be made without consulting the state-sanctioned Auger. The practice is rarely used, but very interesting to study, considering how profound it was in determining the direction of historical events during one of the most significant periods in Western history.

Automatic Writing is simple to understand, but not as easy to execute as one might think, mainly because you have to train yourself not to think while writing. Attempting and developing automatic writing is a skill is you can train yourself to perform, which makes it different from other forms of divination that require “natural talent”. If you can empty your mind and “write from your spirit”, you might be very surprised by the results that you discover when you read what has been written.

Belomancy, or bolomancy, uses arrows for divination. Throughout history, Tibetans, Greeks, Arabians, and Chaldeans used arrows for answering questions or making decisions. The two most common methods involved shooting three arrows or drawing one of three arrows from a quiver, usually placed on the back of the diviner or the person asking the question.

To perform the process three arrows would be marked with the phrases, “it is divinely ordained” or “it is divinely forbidden”, and the third would be blank. The arrows would be shot and the one that flew the furthest indicated the answer. Another method would simply be to shuffle the arrows in a quiver, worn preferably on the back, and the first arrow to be drawn indicated the answer. If a blank arrow was drawn, a clear answer would not be available, and the person seeking the answer would have to act without divine guidance.

Bibliomancy is divination using a text to provide the answer, most commonly a significant religious book, like the Bible, the Koran, Tao Te Ching, or Bhagavad Gita. But a dictionary is a surprisingly excellent alternative. If you want to be a bit more maverick, you can use popular fiction, like a book from the Harry Potter series or a collection of poetry from a contemporary poet.

The technique is rather simple. Get your book, close your eyes, ask your question, open the book, and run your finger down one of the pages. Stop, open your eyes, and read the line or passage where your finger touches the page.

Osteomancy –Bone Reading – is resurging as a form of divination that you might run across at a spiritual or psychic fair, or in a search for a psychic on Yelp or through Google. Bone casting has been around for thousands of years, practiced throughout the world, but especially well-known in Africa, Asia, and Native American tribes of North America. Skilled bone readers know how to interpret the patterns of the bones once they have been “thrown” or cast to answer a question or address a problem.

Capnomancy is a form of divination done by reading the patterns in smoke. The diviner can use a small fire, lit candle, pipe, vaping stick, or cigarette to produce the smoke they will interpret to answer the question or concern of the querent. Some of the interpretive meanings include: a quickly rising plume means good luck or favorable conditions, while a thick hanging plume indicates bad luck or unfavorable conditions. If the smoke “falls to the ground”, immediate action is necessary to avoid disaster or harm.

Bone reading is a specific form of casting, and there are many others. For example, Casting is used for I-Ching divination and done with yarrow sticks or three coins. Rolling dice is another form of Casting. In truth, any object or set of objects can be cast to seek divine answers. The simplest form of Casting is flipping a coin.

Ceromancy is divination done by melting a wax candle until it is molten, then pouring the heated wax into cold water to see what shape it makes. The shape provides the answer to the question. Another method simply involves burning a candle and watching how it melts. The patterns in the melting wax reveal the divine answer.

If you have enjoyed reading about these uncommon forms of divination, be sure to look at the next article which will include more unique methods of divination that were once practiced, are making a comeback, or that might resonate with you if you want to become a practitioner of one of these less well-known arts.

Reach Your Highest Potential with Egyptian Numerology as Your North Star