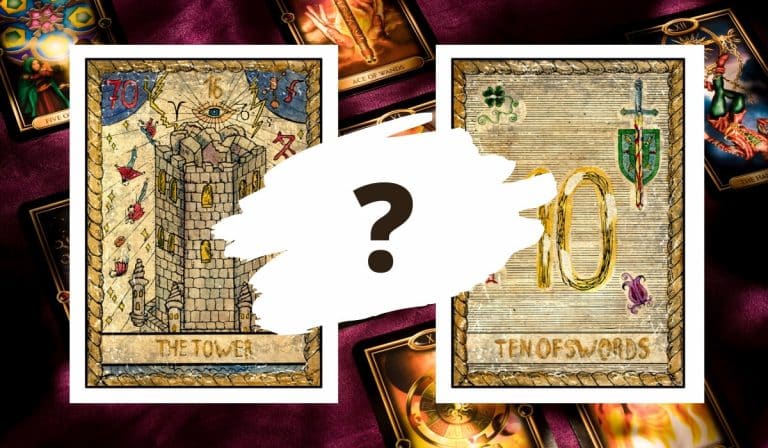 The two tarot cards that no one wants to see in one reading are The Tower and the 10 of swords. That is because The Tower is the card that represents sudden destruction and upheavals that are unexpected. Everyone’s world has been rocked, and the easy comparison to make is how the COVID-19 virus just appeared out of nowhere. And, it turns everyone’s world upside down.

People are forced to stay in their homes other than running necessary errands such as going grocery shopping and getting their medical prescriptions. Restaurants are no longer allowing dine-ins and are only doing takeout and delivery service. Schools are closed for the remainder of the year. Weddings and major events are canceled. This all has created a major shock. That is what The Tower does.

And, it is even worse when the 10 of Swords appears in the same spread during a reading. That is the card that means that something is over, and there is no going back. Therefore, this is a sure sign that something will be destroyed for good, in an unexpected way, represented by The Tower.

There are memes on social media that joke about this combination in a spread. It is about not wanting to get out of bed again when you see this combination. Who can blame them? Because after seeing it the first thing anyone would want to do is just go back to bed and hide under the covers.

However, does this combination always mean that something dreadful is about to happen? That is what will be looked into right now. The answer to that is no. It may seem like it at the time because The Tower is never gentle, saying the least. But this combination in a spread can easily mean that a blessing in disguise may happen.

Many times, when there is a blessing in disguise, it can come in a not so nice way. It can be quite abrupt. And sometimes, it may even mean that this will lead to great things. Things that you would want to see happen!

What This Combination Means When it Comes to a Bad Relationship

However, when this combination comes up in the reading in regard to the bad relationship – if the question is ‘Will I be able to leave the relationship?’, the answer would be to this, yes! But will it be pretty? No. Not with The Tower coming into play.

This would suggest that the relationship would end in a way that would be unexpected and it would also be the cause of the destruction. The 10 of Swords would confirm that it is over and there is no going back. You also would have to look at the surrounding cards as well.

If there is a positive card such as the Nine of Cups in the same spread, then this indicates the wish for the relationship ending would have come true. And you would feel alive and free as well. But again, the way it ends is going to be stressful.

If the Hermit is in this spread, then it will suggest that even though this is what you had wanted, it means that going for therapy to sort through the feelings about it is needed. Because even when it comes to removing someone from your life who you were close to for a long time – no matter how badly you felt while being involved, there will be difficult emotions. There may be grief. Feelings would need to be sorted out.

If the 7 of Swords is in that tarot spread, then it means that the partner was cheating and lying. And that would have been discovered in an unexpected and difficult way which would have been indicated by The Tower.

If the Sun followed both The Tower and the 10 of Swords, then that would be a clear indicator that leaving the relationship would lead you a path to success.

If the 6 of Wands is in that same spread, then that means you would feel quite victorious, and you would be after the upheavals and shock are worn off.

This would also apply to friendships as well. Having a so-called friend who is a friend to your face but is not behind your back would also end when this combination comes up in a harsh and unexpected way. However, having people like that in your life is not something you want to have. And at a later time, you would be glad to no longer have anything to do with this individual who pretended to be a friend.

Another example of how this combination can be a positive thing for you to see would be in regard to breaking away from a bad habit. Especially if you are not eating well.

What This Combination Means When it Comes to Bad Habits

Now, a reading may not necessarily happen when it comes to changing eating habits or lifestyle. This is more of an example of how these two cards could play in life. Someone has been living on a diet of fast food and has been living a sedentary life. This person has no health problems but makes the decision to invest in life insurance if they have a family or makes the decision to change their plan.

They get blood work done, and then out of nowhere, they find out that they are diabetic. They had no symptoms and felt well. However, that is a Tower moment. Discovering that you have a health condition as a result of poor eating (possibly in addition to genetics) is shocking especially if you have no reason to believe you are unwell. This puts them onto a path that they had never imagined being on.

All of a sudden, they have to now visit dieticians, be treated by doctors, and possibly go on medications. Finding this out rocks their world upside down. And this means those bad habits will need to now come to an end which would be represented by the 10 of Swords. This individual is cutting out sugar, trans fats, and is only sticking to organic and natural foods that are measured out. This person is dedicating time to get in a good workout. They are making a good effort to take care of themselves.

Therefore, this is how this combination would be a blessing in disguise. If this individual had not gone through those tests while changing the life insurance policy or checking into getting life insurance, then diabetes would have progressed. Therefore, they would not have been so lucky.

Now, as difficult as it was to take, the individual can now go onto a path of being in good health.

Those are just a few examples of how this dreaded tarot card combination can serve you quite well in the end. Those are all wakeup calls, and wakeup calls are not nice, but sometimes they are necessary. Therefore, if you are doing a tarot reading for yourself for anything and this combination comes up, as unsettling it will feel to see it, remember, a blessing in disguise is about to happen. Expect the unexpected and expect something to end that is for the best.