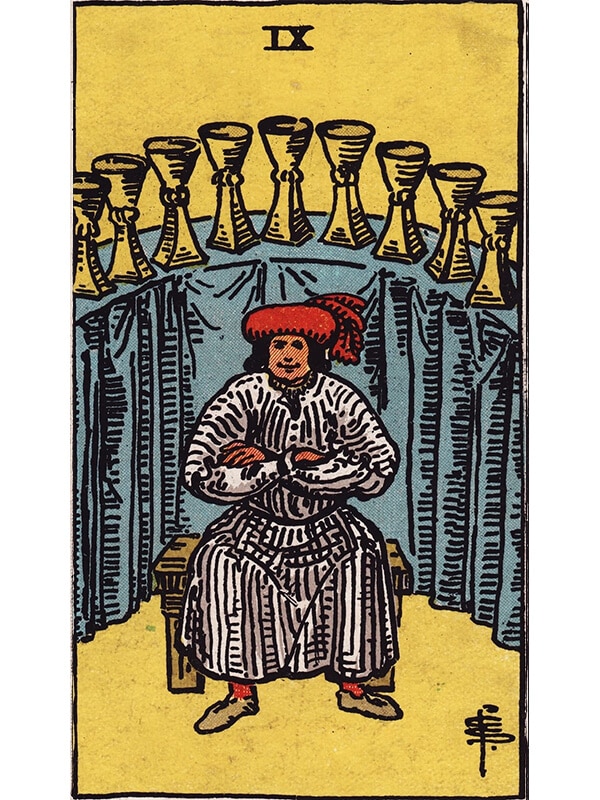 The Nine of Cups is a rather interesting card within the suit of Cups. While the main tarot card meaning is one of content, bliss, and happiness, a sense of fulfillment that is strong enough to dispel any craving for anything more, this kind of bliss often triggers a false sense of superiority and self-worth that can turn fleeting pride into excessive ego and smugness.

The illustration of the Nine of Cups minor arcana might almost have been used for one of the court cards. The central figure is an obviously wealthy man sitting on a small bench with an air of smug contentment and happiness. He is surrounded with a series of columns where the nine chalices are displayed.

In the suit of cups, there are no extra elements or symbolism in the original RWS illustration for the Nine of Cups, drawing attention to the main figure and the abundance of chalices.

This minor arcana card represents the feelings of pride and fulfillment that can be felt when someone achieves something substantial and satisfying. The Nine of Cups in a tarot reading usually echoes a great sense of well-being and satisfaction, the kind of pleasure that can be experienced after a great meal in a fancy restaurant surrounded with friends. This is a state of complete bliss when so many cravings and desires have been met that you finally take some time to just be content and enjoy your situation.

The source of such contentment can vary widely but is usually mainly physical (a good meal, a satisfying sports training session, a sensual evening with a lover, and so on).

Drawing the Nine of Cups in a love tarot reading usually highlights the mental and physical pleasure shared with a significant other or lover. This card hints at a high level of physical compatibility between the two. The scope of the Nine of Cups in a love reading does not go beyond that, however, so the rest of the cards in the reading must be considered in order to define the kind of mental and emotional compatibility that can arise between them.

Combined with other cards the meaning can shift to deceit or secrets (like a reversed Magician, High Priestess, or Moon among the major arcana). In such a reading Nine of Cups might indicate a secret love affair outside the limits of the Querent’s relationship, with one side of the couple cheating on the other.

Career encompasses school and education if that is your current stage; work that is necessary, but not what you would consider a career path; and your actual career path. Regardless of your current stage of development, the Nine of Cups lets you know that are on the right path or should be pursuing the path that makes you happiest.

If you are a student and this is your card, then you want to think about your success and joys of learning your trade and developing your skills. You should feel like your studies are preparing you for success out in the world.

If you are doing work that is necessary, but not a career, then you want to focus on the aspects of your work that bring you real joy. Maybe it is the social connections; maybe the work itself. You just want to be sure you are doing what you love.

If you are in your career, then the Nine of Cups should represent career satisfaction and fulfillment. What have you accomplished in your career and what do you still want to accomplish? In a work question, this is the joy of being productive and getting the deserved rewards of your hard effort.

A reversed Nine of Cups unveils the negative aspects tied to the kind of bliss mentioned above, hinted at in the facial expression of the main character from the illustration in the Rider-Waite-Smith (RWS) tarot deck. Content and satisfied with one’s own accomplishment can trigger a surge of excessive pride in that subject, a certain smugness, and a sense of superiority that make it easier to look down on other people who do not share that bliss and privilege.

While this kind of superficial arrogance can be annoying, the worst part is that it often leads to even greater flaws. Indeed, this might strengthen any latent tendency for selfishness, but also weaken any personal or professional resolve, leading that person to rest on their laurels and stop trying to improve themselves, thus creating the conditions for their own doom as the rest of the world eventually passes them by.

Reversed, this card indicates that your happiness in the relationship is somehow blocked. You are not getting what you want or feeling personally satisfied. Are your expectations not being met; have you changed, and now you need to change the relationship?

When this card appears reversed in a question about school, work, or career, then you know that you are unfulfilled or unhappy in some way relating to your studies, work, or career. Unlike the Eight of Cups reversed, there is potential to get back on track; you just have to figure out what you really want.