The Decans of Scorpio 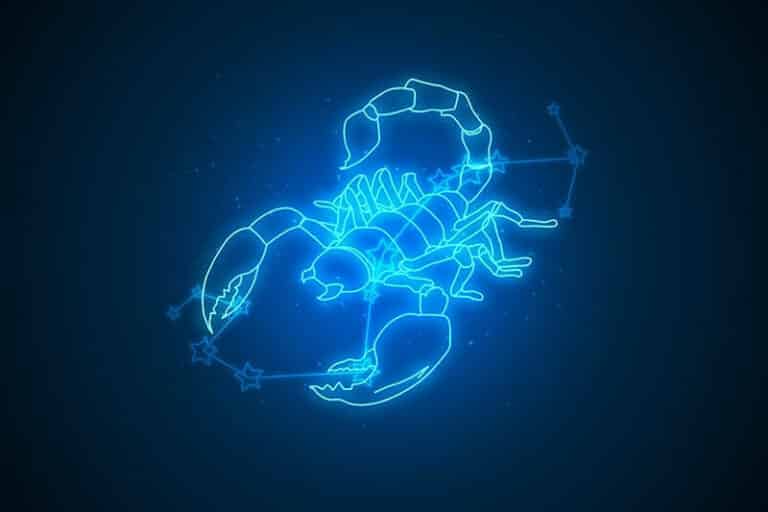 This year 2021 we enter the zodiac territory of Scorpio on 23 October and stay there until 22 November.

The zodiac sign of Scorpio is named after the constellation of Scorpius the Scorpion.  It marks mid- autumn and the declining daylight in the northern hemisphere (or the end of winter and into early spring in the southern hemisphere.)

Scorpio is the eighth sign of the zodiac, and rules the eighth House, representing the concepts of Death, Sex and Regeneration; Nature’s never-ending cycle of life and death.

The constellation of Scorpius has been seen as a scorpion by ancient cultures all over the world – one of the few constellations that actually look recognizably like the animal it is named after.

The sky scorpion, seen overhead at this time of year has over time, become associated with the dying light and heat of the northern hemisphere moving past Halloween, which is the halfway point between the autumn equinox 22/23 September and the shortest day of the year; the winter solstice, which this year will be Tuesday 21 December.

Scorpio is an extreme sign, at the same time fiery hot and icy cold, reflecting its planetary rulers. Scorpio is traditionally ruled by the red planet Mars, the planet of action, named after the Classical Greco- Roman god of war.  But its modern ruler is the icy dwarf planet Pluto, not discovered until 1930 and named after the Greco-Roman god of the underworld.

Pluto, although small, and though its status as a planet is an ongoing debate, is large enough, with a gravitational pull sufficiently powerful to make it spherical, like a planet. And it is symbolically powerful in modern astrology, by virtue of the very fact that it is so far away from the sun. Its orbit takes 248 years, so that its symbolic effects are deep, far reaching and long lasting.

The zodiac signs paint a ‘typical’ portrait of a person born at a particular time of year, in a particular season. A baby born in summer for example, arrives at a different physical environment from a winter baby; with differences of parental diet, temperatures, and hours of daylight and so on, with a range of potential physical effects.

The major arcana card in the Tarot representing Scorpio is the Death card, one of the most famous and most feared cards in the Tarot deck.

Yes, the idea of Death is scary. But Death is part of Life. Without Death, there would be no space for new life. We are getting our turn at life right now. Others are waiting their turn. Others before us have had theirs and who knows, maybe they will get another turn one day.

This is the reminder that, just as the daylight is dying; so, Death comes for everyone alike, old or young, man or woman, the archbishop and the child as shown in the card.

There are no guarantees that any one of us will make it to the age of ‘three score and ten,’- that any of us will see the age of seventy. Old age is not a right. In the natural world, few animals in the wild live into old age. Life is for living now, says Scorpio, and it is this awareness that gives Scorpio its drive, intensity, its passion, and sometimes its preoccupation with the dark side of life, and with the occult and the mysterious.

The court card of Scorpio is the King of Cups.

Scorpio is a magnetic and dynamic personality. They are generally excellent in an emergency but in everyday dealings they can be difficult to understand, and not straightforward for others to deal with. They tend to be secretive and though they are mostly courteous, generous, sympathetic and loyal, they have a temper, and can be controlling. This can be a problem for others, if the Scorpio does not learn to control it.

Scorpio needs a challenge. They like to unlock puzzles and mysteries and they need to feel that their work is important or meaningful. They will often be found in high pressure situations, handling serious, intense, traumatic, life or death issues, in the emergency services perhaps, or in the police, detection, crime & prisons, psychotherapy, bereavement counselling and transformational therapy. They often have a talent for management, including financial management, with an aptitude for research and resource management within the financial sector and power production industries

But of course, there is no such thing in reality as THE Scorpio personality. You are a unique individual. Your zodiac sign (sun sign) is a major keynote, but it is nothing like the full picture in real life – or even in astrology.

If you don’t feel like a ‘typical’ Scorpio, perhaps you are a second or third decan Scorpio, rather than a ‘most typical’ first decan Scorpio.

What Are the decans?

The Zodiac is the belt of sky we see from earth, looking up and tracking the daily path of the sun across the sky from dawn till dusk. We call this pathway of the sun ‘the ecliptic’ and it traces a line along the middle of the zodiac belt.

Each zodiac sign represents a 30 degree section of this 360 degree belt, or this imaginary ‘pie in the sky,’ as seen from Earth.

Each zodiac sign is then sub-divided into three blocks of ten degrees, equivalent to about ten days in length to gives us the decans, from the Greek word meaning ‘ten.’

The decans are nicknamed ‘the thirty-six faces of astrology,’ breaking down each sign into a storybook of three chapters that dig just a little deeper into your personal zodiac story.

Card Meanings:  Grief, disappointment and recovery from loss. What is lost and what still remains

Here is the most ‘typical’ Scorpio subject. Mars, the ruling planet of Scorpio is doubly powerful in this first decan. This is an active, determined, dominant individual, impulsive, high-spirited, and charismatic. They may have intensely deep feelings but generally keep them well hidden, and when the going gets tough, so do they, showing fortitude in adversity, and a huge amount of willpower for good or bad.

They may exert a creative or destructive influence on their surroundings, and usually, it will be creative. They have a lot going for them, but may need to learn patience, and to exercise understanding and self-restraint in order not to self -sabotage their own best chances of success and happiness in dealings with others.

Scorpio/Scorpio individuals are incredibly driven. They can be more prone than other people to extreme or obsessive behaviours, but show the courage, tenacity, and willpower to overcome odds against them, with the resilience to bounce back after a setback and start afresh.

This Scorpio decan is also intense, driven, but is slowed down to an extent, cooled and moderated by Pisces and its rulers, Neptune and Jupiter, suggesting a changeable and unpredictable nature, sometimes explosive, at other times slow or even sluggish.  There is an element of contradiction here. Jupiter is the planetary symbol of good luck, and extroverted, and Neptune ‘The Dreamer’ is deeply introverted.

This individual’s greatest battles in life may be with themselves, starting at an early age. The influence of Neptune may be an inspiration, or it may become their downfall, if they start indulging in escapism via any form of addiction, drugs, alcohol, gambling or other risk-taking behaviours.

These sensitive people are often interested in esoteric subjects; religion, the mystical, and the occult.  They need unconditional love and support at home.  A strong and loving partner and they need to be very careful in their friendships and choice of company.

This Scorpio often has a talent for medicine and healing arts are perfect for those governed by this Decanate. In addition, it is crucial that they receive unconditional love and have a stable, grounded, loyal, loving mate who will appreciate them and reinforce self-esteem in healthy ways.

These individuals are searching for a purpose, and strongly feel their lives should have some greater purpose.  They can achieve great things. But if things go against them, they may lose faith in themselves and show lack of trust in others.

This decan is highly imaginative, proud, creative and dramatic.  The Moon and Venus cool and soften the energy of Mars, indicating a magnetic personality, perhaps a natural artist or performer.

The influence of the Moon lends these natives the ability to become exceptional nurturers and financial wizards. The Decan 3 Scorpio will often have a particularly close relationship with his or her mother. This is a good thing unless it is allowed to take on too much importance in their relationships with their chosen life partner.

These individuals need to be seen to be right and will go to great trouble to stay on firm ground and make sure that they are.

These Scorpios are the ones most likely to want to leave a legacy to loved ones and favourite causes. Money, privacy, loyalty and property are of supreme importance. A skilled keeper of secrets, these individuals will carry mysteries and resentments to their graves. With a remarkable memory and super sensitive hearts, they can hang on to a sorrow -or nurse a grudge.

They are caring, abiding and more domesticated than other Scorpio natives. Canny, subtle and adaptable, and with stunning powers of concentration, Scorpio/Cancer may also be highly sensitive do-gooders, advocates who speak or write with incredible force and compassionate eloquence, with a charm that makes them very effective when they are working with a group for a common cause.