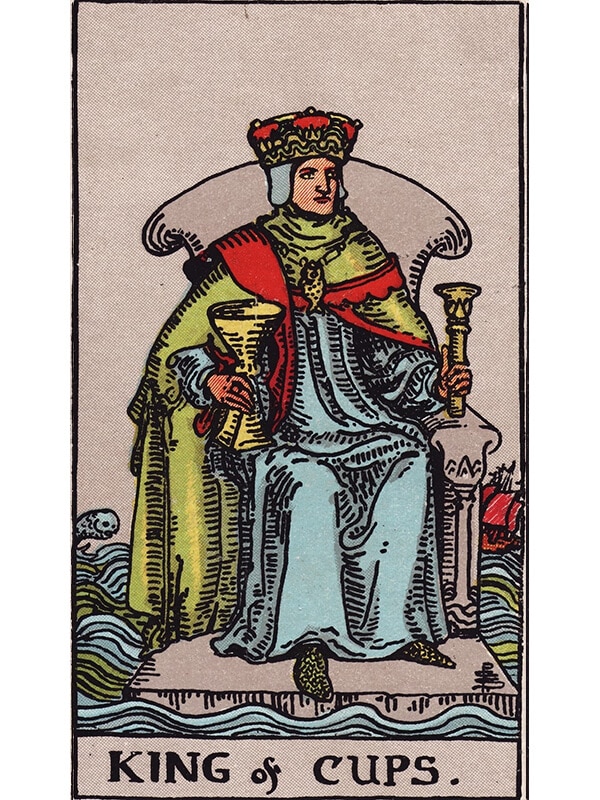 The Suit of Cups

Upright: charisma, influential, emotional intelligence, and concern for others

The paragon of the four court cards in the suit of Cups, the King of Cups has mastered the endless flow of emotions brought by the element of water. Consequently, he plays these emotions like a fiddle that grants him a huge advantage in social situations. He will often quickly know what people around me really want, and as such will use that information to negotiate terms that will usually be in his favor. Whether he will ultimately deliver the promises he made or not depends on his mood and personal assessment of the “worth” of this relationship.

The King of Cups is usually loyal and faithful in marriage, but his willingness to freely use every tool at his disposal can make him extremely manipulative even in a romantic context. His natural ease to understand and channel emotions have let him navigate the wild waters of social interaction, and he will usually try to keep control of them for as long as it is necessary.

The King of Cups in the Rider Waite Smith tarot deck is an adult man on a throne floating directly on the water, with no land anywhere on the card illustration. The fish on the left and the boat on the right quickly shatter any doubts about the location of the throne.

In this minor arcana card, the King carries a chalice in his right hand and a scepter in his left. He is staring into the distance, probably at something far away.

The King of Cups also flows with the energy of the element of water, but like all the other Kings he has fully mastered his own element. As such, he can use his own emotions and those of the people he is talking to, channeling their energy in a way that lets him heal them.

In the suit of cups, this King is responsible and wise, gifted with emotional intelligence, even if he will more likely than not default to listening to his emotions over the emotions of others.

The feelings that grow within the King of Cups are usually rather deep, but his calm demeanor lets him hide them from others.

In a love-driven reading, the King of Cups represents an adult man in harmony with his own emotions and feelings, able to provide love, caring, and attention, but sometimes deliberately choosing not to.

His innate understanding of what makes people tick turns him into an exceptional diplomat and communicator, but he is aware of this power of his and can sometimes choose to abuse it for no other reason than because he can.

He can be tough with his own family, using his comfort with their emotions to teach them valuable lessons that will objectively make them better people, even if sometimes the emotional price that was paid could be out of proportion with the actual lesson learned.

If you are a student and this is your card, then you need to begin to see yourself as the future instructor and leader of what you are studying. One day you will need to transition from the student to the practitioner to the teacher.

If you are doing work that is necessary, but not a career, then you need to think about your leadership role at your job or the need to pursue a career and not just work day-to-day. Also, you need to reflect on your relationship with leadership in your company and with your boss.

If you are in your career, then the King of Cups represents the need to take care and lead your employees and clients. They want to feel and know you care about them as much as they want you to demonstrate your ability to succeed in your chosen field of work.

The way that the King of Cups often deliberately chooses to follow his own emotions makes him hard to understand for commoners and noblemen alike. He will usually follow his own nature and desires and is not above using deceit and cunning to do so. He has learned the power of emotions and can use people’s own feelings against them. He is an expert manipulator.

Reversed, this card indicates that you may be enabling someone for your benefit to their detriment and you need to take a long, hard look at your behavior. You may be getting a material gain, but you are losing spiritual integrity, which will eventually bring harm to yourself. Conversely, you may have to face the fact that your partner/lover is bullying or emotionally abusing you and you need to take action to protect yourself.

When this card appears reversed in a question about school, work, or career, then you need to realize that cheating and lying will eventually cause your downfall or the downfall of someone in power over you. You may be the target of malpractice or a whistleblower; or, again, conversely, you may have to be the whistleblower, and doing so will probably hurt your studies, work, and career.

<< Go to the previous card (Queen of Cups)