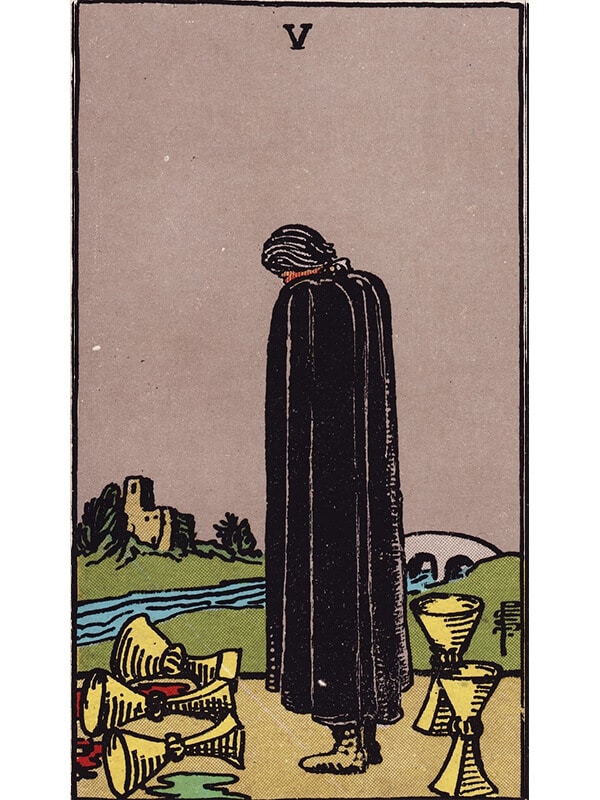 Reversed: self-pity, lack of efforts, downward spiral, and the burden of the past.

Another mainly negative card, the Five of Cups is the embodiment of mourning and overall sadness. In an appropriate context, it might be a temporary state of being left enough time to pay respects and offer closure to a painful memory. But more often than not, this card will bring a sense of loss and apathy that will try to lock the Querent within a vicious cycle of depression and dark thoughts.

The best piece of advice to avoid this kind of spiral is to let bygones be bygones and look ahead instead of looking back. It can also represent an upcoming painful decision to make, one that has no easy way out, and where a kind of pyrrhic victory is probably the lesser evil among all options.

Another lone figure standing on an empty location, his back turned to the reader, the Five of Cups in the traditional Rider Waite Smith tarot deck seems to wander aimlessly on a large field. There are several chalices on the ground, as though abandoned – willingly or not -. Three of them stand on the ground before him, unable to make a choice, while two additional options stand behind him, but he is oblivious to their presence.

Like the Four of Cups that came before, there are almost no positive elements that can be found in this minor arcana, with nothing much to say or do to change this situation. The obvious sad posture of the character, combined with a long and ominous black cloud, tends to refer to some solemn moment for the Querent. A feeling of loss, frustration, and bitterness that can heal in time, but will always leave a mark.

Mourning serves a purpose, however, and if the Querent can avoid wallowing in self-pity, this minor arcana card of the suit of Cups could represent the very beginning of the healing process necessary to get their head back in the game and move on to the next chapter of their life.

This card is quite naturally a rather bad sign when it is drawn during a reading focusing on love and relationships. In a romantic context, it usually means that the two members of the couple are clearly not on the same page, physically and/or emotionally.

Another common interpretation is that one of them still has intense feelings about one of their exes, and keeps comparing this relationship with the former one. This builds a kind of mental cyst full of resentment and incomprehension, something that needs to be worked on before it is so wound up and full that the results might be extremely disruptive to watch. Any serious relationship needs to be brought up on solid foundations, or the result will inevitably be painful and leave a bitter aftertaste of wasted time.

Career encompasses school and education if that is your current stage; work that is necessary, but not what you would consider a career path; and your actual career path. Regardless of your current stage of development, the Five of Cups is about emotional disappointment with school, work, or career.

If you are a student and this is your card, then you may have to acknowledge that what you hoped for from your academic career is not happening, and you are disappointed. Change needs to happen, but first, you must accept you have a change of heart about your academic goals.

If you are doing work that is necessary, but not a career, then you probably want to dust off your resume and start looking for a new, better work situation. Unseen opportunity awaits (the two upright cups behind the figure), but what is in front of you is no good (the spilled cups).

If you are in your career, then the Five of Cups shows up to get you to think about and address the disappointing aspects of your career path, from the past, in the present, and maybe even into the future. Are these disappointments enough to get you to consider another career path or just experiences you must deal with in any career.

Further enhancing the negative aspect and elements of this minor arcana, when it appears reversed in a reading it usually hints that the healing process mentioned just before should not be taken for granted and that the Querent will find it almost impossible to break free from the vicious cycle of self-pity and pointing fingers on their own, as they try to ignore the pain and emotional turmoil they feel. The only way out of such a trap is to stop obsessing about the past and look ahead, no matter how painful it might seem.

Reversed, this card suggests there is nothing to salvage from whatever emotional turmoil is in effect. Now, even the two cups in the background are upside down. This card can represent real heartbreak or emotional betrayal that could take some time to overcome and heal.

In a professional context, a reversed Five of Cups would indicate a deal that goes badly, being fired (or having to fire someone), or a major betrayal of trust. This hard card is even more difficult reversed, so you want to do whatever you can to keep your emotional health intact.