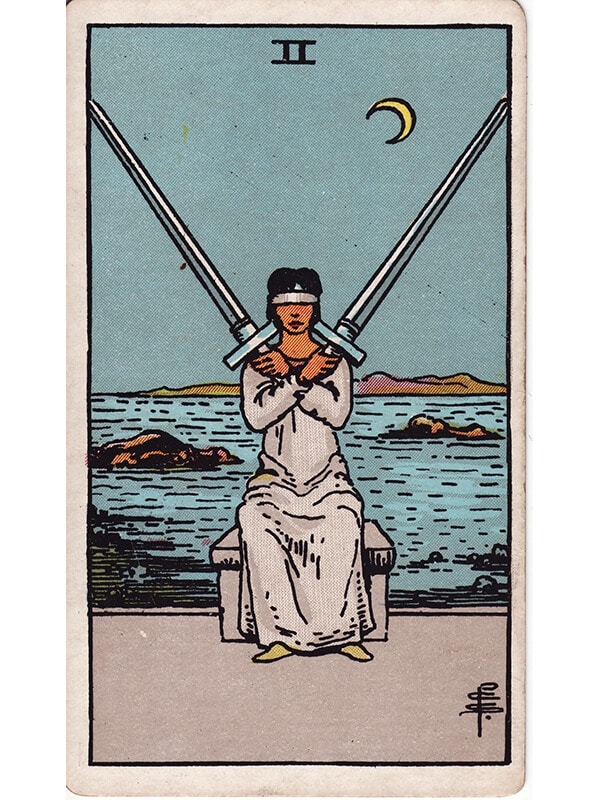 Upright: being at peace with your decisions, clear thinking, and balance/harmony

When the Two of Swords appears in a tarot reading, you must be at peace with your decisions up to this point. If reversed, it shows frustration with a difficult decision affecting either the Querent or the subject of the reading. Lack of information, indecision, or fear of potential consequences have led the situation into a stalemate, and the longer it lasts the harder the eventual decision will be.

The tarot reader should focus on the other cards drawn in the spread to get more information about the problem at hand and use the tarot card meanings to provide some advice that might untangle the situation and provide a way out of this dead-end.

In the traditional representation of the Two of Swords from the Rider-Waite-Smith (RWS) tarot deck and its derivatives, you can see a lone figure, a young woman dressed in a white, almost spectral gown. The card shows her sitting blindfolded on a stone bench and holds a sword in each hand, crossed before her.

A large pool of water, probably a lake, can be seen behind her, and the presence of a Moon crescent in the sky suggests that this scene happens at night, dusk, or dawn.

The Two of Swords is basically neutral upright and very limiting reversed. The blindfold implies: whatever happens and whatever decision is made under this minor arcana card influence, the Two of Swords will usually happen without any prejudice or bias, as lack of direct vision will let the woman judge and weigh the matter fairly and objectively.

The Two of Swords is a rather thematically neutral element in the minor arcana, in that is does not specifically refer to the professional, personal, or romantic domain. When it appears in a tarot spread that focuses on romance, love, and relationships it often highlights a sort of love triangle the subject is currently in. The Querent is standing at the crossroads between two love interests and has a hard time letting go of either of them.

Career encompasses school and education if that is your current stage; work that is necessary, but not what you would consider a career path; and your actual career path. Regardless of your current stage of development, the Two of Swords represents the decision made that now sets you on your course.

If you are a student and this is your card, then you need to accept the choices that brought you to your current path and way of thinking. There is no benefit in second-guessing your choices. Be at peace with your decisions so far.

If you are doing work that is necessary, but not a career, then you need to move forward with your current choices and see where they take you regarding your job. This card looks for the next decision and the next one, and so on.

If you are in your career, then the Two of Swords represents the pattern in your thinking that makes you successful. You want to keep following that pattern and using those thinking processes that are proven. Trust your knowledge, not your gut instinct, to make you successful in the long run.

The core concept of the Two of Swords tarot card meaning is having to make a difficult decision and standing at the crossroads, balancing both sides of the argument just like the woman balances the swords in her arms. Most of the time, the presence of the Two of Swords suggests that the situation is at an impasse and that the subject is unwilling to commit to a decision, one way or another. They are feeling conflicted, or need more facts and data to make their choice.

Another common interpretation is that the conflicting elements in that situation put the heart and mind, reason and feelings, in opposition. This duality is even further enhanced with a reversed Two of Swords in a tarot spread. The stalemate is stuck in a dead-end and the longer the situation lasts, the harder it will be for the subject to be objective, leaving them in that state of indecision.

Combined with other negative cards that have a meaning of deceit, The reversed Two of Swords tarot meaning is often that the Querent knows which is the “right” decision, but knows the consequences would be painful and would rather lie to themselves.

Reversed, this card indicates that some decision you have made recently about your relationship needs to be revisited. Either you got it wrong and need to fix it; or, you want to be “damn” sure you got it right. The decision has far-reaching consequences and you should do some review to make sure everything is good.

When this card appears reversed in a question about school, work, or career, then you need to go back to a previous choice and review it. There is a good chance you have chosen the wrong path or a good reason why you may feel uneasy about a choice you made.