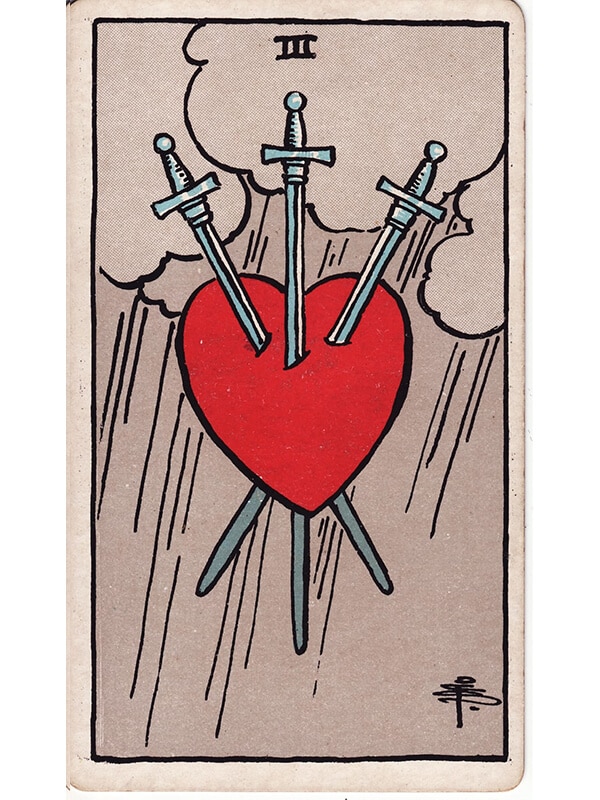 Reversed: confusion, cruelty, alienation, and altered sense of self

Drawing the Three of Swords in a tarot reading is always a painful and difficult experience. Like the obviously negative iconography used in the illustration for this minor arcana, the situation is bleak and painful, so much so that the subject might feel pinned to the ground like the heart on the card. The best way to deal with such a situation is to accept it, assess the damage that was done, see how that damage changed the status quo, and start building again using all the broken pieces to turn them into something better, bigger, and stronger.

The Rider-Waite Smith (RWS) tarot provides a rather striking image for the illustration of the Three of Swords. There are no human characters depicted, but rather a very large heart stabbed with three swords.

Heavy clouds can be seen in the background, it is raining intensely. In colored versions of the RWS deck, the background is usually a dull and depressing gray. In the foreground, the heart has to endure a trial of its own, stabbed with the three swords of the minor arcana.

Even tarot decks that try to steer the iconography away from the traditional RWS deck usually paint a scene that leaves no room for doubt that this is a mainly negative card, a call for action or attention to an uncomfortable problem in the reading.

The traditional image used in the Rider-Waite tarot deck is quite transparent regarding what the Three of Swords meaning is when encountered in a tarot spread that focuses on love. It is a sign that something bad is happening to the emotions of the subject. It might signal a slippery slope leading to an eventual breakup, or simply something that will deeply hurt one or the other within the relationship. As usual, the tarot reader should focus on contextual clues to provide advice about this difficult situation and see if there might be a way to avoid it or better deal with its consequences in the long term.

Career encompasses school and education if that is your current stage; work that is necessary, but not what you would consider a career path; and your actual career path. Regardless of your current stage of development, the Three of Swords represents cognitive dissonance from a mix of getting what you want and do not want in a situation.

If you are a student and this is your card, then you may love being in your major field of study while having to take a course from an awful instructor. It may turn out that a course you need does not fit in your current schedule, which will force you to extend your studies by an additional semester or year.

If you are in your career, then the Three of Swords represents the down years in terms of finances, recognition, and growth. Some choice you made recently, or some time ago, is bringing sorrow to your work right now, and you will have to find a way to get through.

By looking at the traditional representation of the Three of Swords in the Rider Waite Smith deck, most people would be able to correctly guess the main concept embodied by this card: heartbreak. One might expect this to be part of the suit of Cups because the heart is usually a metaphor for emotions and feelings, but here the minor arcana meaning is focused on the actual consequences of these hurt feelings on the mind and mental state of the subject, which explains why it is part of the suit of Swords.

The emotional pain that comes from heartbreak fills the mind with sorrow and grief, and the feeling of helplessness that comes from the intellect trying to make sense of the pain that it feels, and unable to do so because the source is emotional and not logical.

When the Three of Swords is reversed in a reading, it focuses on the overall confusion brought by the feelings of heartbreak. Conversely, depending on the context, a reversed Three of Swords could also represent the subject of the reading deliberately inflicting emotional pain on someone else, being the perpetrator instead of the victim.

Reversed, this card indicates that regret or guilt from a past relationship or situation is impacting your current relationship. It is likely time to deal with some past issue, perhaps even with the help of a spiritual advisor, coach, or psychologist. It may also represent an issue you have discovered that is worrying your partner.

When this card appears reversed in a question about school, work, or career, then you need to search the past for a problem or concern that has been “embedded” in your thinking and decision-making that is causing difficulty for you in the present moment. You need to figure out what it is and see if you can correct it before it does harm (or more harm) to your work.