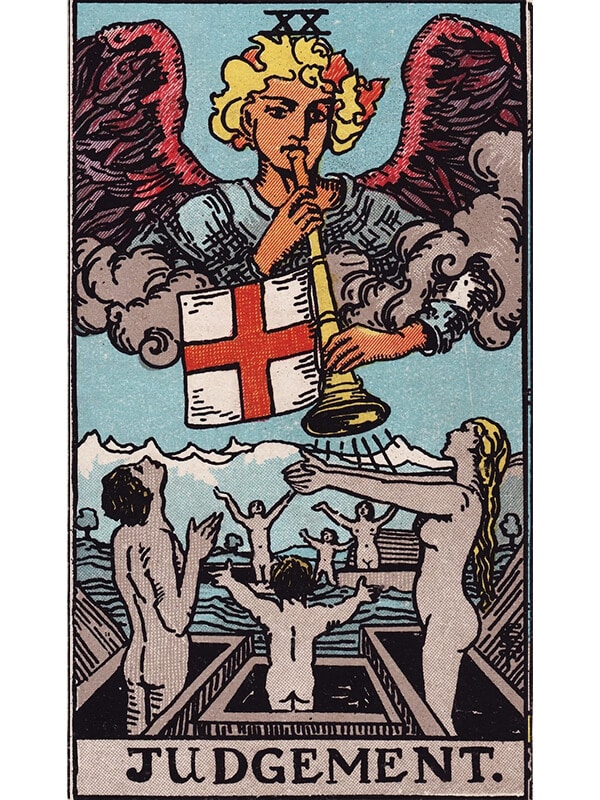 The Judgment tarot card heralds the final outcome of a specific situation or thought. When it appears in a reading, it offers a sense of ending and finality that can be either good or bad depending on the nature of that outcome. If positive, it should be a source of celebration. If negative, it might be a wake-up call and a warning that it might be your last change to try and alter a particularly bad ending.

The penultimate card among the major arcana embodies the concept found in its name. It is a time for Judgment, a time to distillate all the elements of a problem or situation and get ready for its final outcome. This can range from a positive feeling of achievement to a serious situation that would better be avoided if possible. In that case, all the clues and elements that might help can usually be found in the other cards in the reading.

Most depictions of the Judgment card borrow symbols and imagery from the concept of the last judgment that can be found in the Christian bible and other faiths, where the dead rise up from the ground to be judged before a final reckoning, the last stand between good and evil, or a final moment before the final journey leading to paradise or enlightenment.

While other silhouettes can be seen in the background, the foreground characters seem to be a traditional family (a woman, a man, and a child) rising from their grave to the wake-up call of a celestial angel blowing a trumpet from the clouds. In the more detailed tarot decks, the expression that can be read on the faces of the newly risen is usually one of bliss, wonder, and adoration.

The meaning of the Judgment card is the final outcome of a situation. Of course, it should be important to keep in mind the same kind of lesson that was learned for the Death major arcana, namely that every ending is also a new beginning and that everything is part of a cycle.

Nevertheless, where Death focused on that transition and the importance of transition and evolution, here the finality and focus should definitely remain at the end of the current cycle. If reaching a positive outcome, it can mean an extremely intense feeling of satisfaction and achievement.

This card should also be seen as one last, final chance to change something to the current situation if it seems bound to fail or crash. The rest of the reading can provide essential clues and messages helping the Querent sort out the situation before it is too late.

The number 20 card of the Major Arcana, Judgment, represents an important decision that needs to be made regarding love and romance. Judgment is an action card with a clear direction and pursuit of a specific outcome. How does your relationship stand up against the scrutiny of judgment?

If you are single, this card will ask you to really think about your decisions leading to or maintaining your “singleness”. Identify what you want in a relationship and then be willing to be decisive about the steps you need to take to be successful in your search for a partner. Having a positive, can-do attitude is very attractive in the dating market.

If you are in a relationship, this card encourages you to speak up and assert what you want in your relationship. It is time to “judge” your relationship to see if it is where you want it to be, or not. We may discover that we are happy, or we may find that what we want is out of alignment with what the other person wants, which will require significant choices from both of you.

Career encompasses school and education if that is your current stage; work that is necessary, but not what you would consider a career path; and your actual career path. Regardless of your current stage of development, the Judgment card indicates that a significant decision or judgment about your academic, work or career path is about to happen or happening. Are you ready to be judged?

If you are a student and this is your card, then this card is basically every test and final grade for every class. Beyond grades, you may also need letters of recommendation. Will you be judged favorably and given stellar letters or realize you missed the chance to build a good reputation, and cannot ask for letters of recommendation because they will not be given or positive.

If you are working, but not doing something you would consider a career, then your performance is under scrutiny and you should make every effort to be a stand out employee. If you are a manager, then it is time to look at all your employees and pass judgment on their performance for the benefit of your company.

If you are in a career path, Judgment reminds you that “the buck stops” with you. You are either the final judge or have to self-regulate (self-judge) in order to stay on top of your game and at the top of your field. You may also get judgments through testimonials, increased/decreased sales, and raises, or being passed over for a raise.

The appearance of the reversed Judgment card should never be taken lightly in a reading. It holds the same meaning of finality and outcome as above, but any sort of control seems to slip through the fingers of the Querent, helpless under the whims of fate.

The Judgment major arcana can be the bearer of bad news when reversed, a sign of weakness that will be nearly impossible to overcome. If combined with other negative cards, it can lend them a sense of finality and inevitability that is never a good sign. Combined with the Death major arcana, these two cards usually provide a rather grim warning about a serious accident, illness, or even death in the near future for someone related to the topic of the reading.

Reversed, this card suggests there is some difficult decision you must make. The time of avoiding, resisting, or pretending has come to an end. If you do not make the decision, then you may be on the receiving end of a decision about the relationship that you do not like. You may judge or be judged unfairly; if so, how will you act/react?

When this card appears reversed in a question about work or career, then it is likely a decision will not go in your favor, especially if you are competing for a position and there are other applicants who may or may not be better than you, but will get the opportunity nonetheless. You also have to watch out for poor Judgments regarding your work and career. Did you make a mistake? If so, get to fixing it as quickly as possible.

The Fool has finally been reborn, leaving the remaining shreds of his past self and existence behind as they become truly enlightened. This is also when the Fool becomes strong enough to pass judgment on their own life, without lying to themselves.

This is where the Fool can make any final alterations on themselves before the ultimate lesson, as their own inner, higher self manifests, unveiling their place in the world and their higher calling. If the Fool can prove that they have learned all the lessons taught so far in their journey, they will show themselves ready for enlightenment and exaltation.

Using Judgment in a meditation session is meant to provide someone with enough distance and critical thinking to be able to objectively analyze their own shortcomings and limitations, in order to know what they should work on to get better as a human being.

This can also be a time to look back on your personal achievements and recognize all the progress you have made in life. Good or bad, and probably a mix of both, what truly matters here is to be completely honest and truthful with yourself. It is not as easy as it sounds, but the Judgment tarot card is here to help.