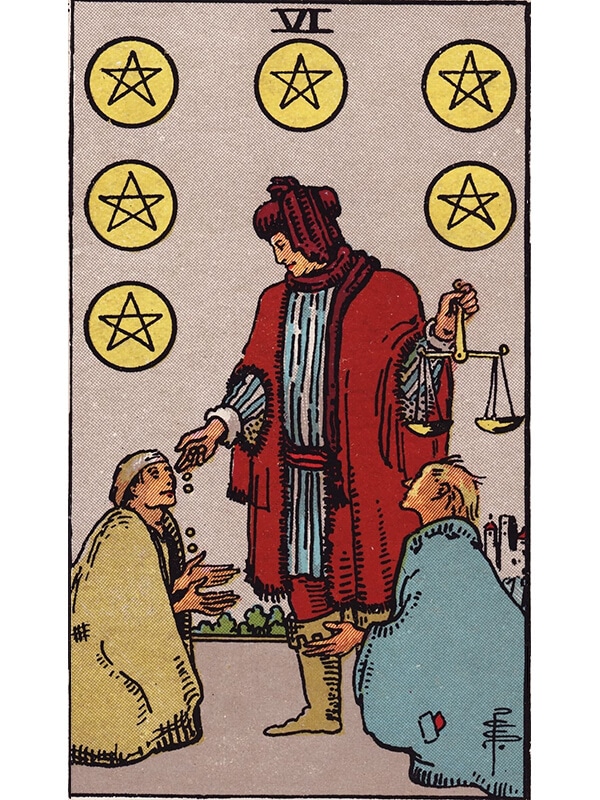 Reversed: cupidity, greed, selfishness, and refusal to help someone in need

One in the guise of a merchant weighs money in a pair of scales and distributes it to the needy and distressed. Divinatory Meanings: Presents, gifts, gratification. Another account says attention, vigilance, now is the accepted time, present prosperity, etc. Reversed: Desire, cupidity, envy, jealousy, illusion (Rider Waite Booklet).

This is one of the most altruistic cards in the tarot deck. The Six of Pentacles is here to remind us of our humanity, and how everyone has everything to gain by taking care of the weakest among us.

Modern society is turning people against one another and glorifying the cult of the self, alone against the rest of the world, because division is a breeding ground for inequalities. The lesson of the Six of Pentacles is that caring for one another and helping those in need are the sentiments that made humankind great and set us apart from the rest of the animal kingdom.

The usual illustration of the Six of Pentacles in a tarot deck (like the Rider-Waite or similar fully illustrated tarot decks) usually comes as a contrast and solution to the previous card in the suit of Pentacles. The main character is an obviously wealthy noble or merchant offering alms to the poor, represented by two homeless people.

The wealthy character, interestingly enough, carries a pair of scales in his left hand, echoing a message of justice and righteousness.

Like the scene displayed on this minor arcana card, the Six of Pentacles usually appears in a tarot spread or reading when a notion of charity or generosity needs to be conveyed. The other cards in the reading will usually provide enough clues to determine what this instance of charity refers to, or who might need financial or material support in the Querent’s life.

By broadening the core meaning of an upright Six of Pentacles in a reading, this minor arcana card could also refer to a gift, either offered by or given to the Querent or subject of the reading.

If the subject of the reading is particularly rich or in a comfortable material situation, the scales of justice on this card might be seen as an incentive to give away part of their assets and help those in need.

When the upright Six of Pentacles is drawn in a tarot spread focusing on love, it usually draws a parallel between the usual reading of the card, concepts of selflessness and generosity towards the poor, and the loving kind of devotion one can feel towards their partner in life.

Usually, it refers to one of the people in that relationship (or even both) putting the other’s needs before their own, ready to freely give away their time or resources to make life a little better for the one they love. While ultimately laudable, this is something that should be watched out for, because the Six of Pentacles also encourages balance and fairness, especially between equals, as highlighted by the pair of scales in the main character’s hand.

Career encompasses school and education if that is your current stage; work that is necessary, but not what you would consider a career path; and your actual career path. Regardless of your current stage of development, the Six of Pentacles represents success and abundant achievement.

If you are a student and this is your card, then you are proving your worth in your studies and will one day be able to use your knowledge to build your financial success in the world. Hopefully, you will do so to a great enough degree that you will have abundance and can give back.

If you are doing work that is necessary, but not a career, then you need to appreciate the rewards of your hard work. And, if you have excess, consider helping others who are not as fortunate, but who would appreciate and grow with some generous but fair help.

If you are in your career, then the Six of Pentacles represents a high enough level of success to be able to give money to a cause or people who would use your helping handout to better themselves. You might do this by creating a scholarship fund for promising, but needy students. You, basically, want to give back to the community where you found your success.

All the positive elements of the Six of Pentacles are turned upside down when the card appears reversed in a tarot reading. Generosity turns into selfishness, charity becomes greed, and justice fades away to let self-centeredness in. This is what happens when someone deliberately turns their back on someone else or refuses to provide assistance even when it would be at a little cost to themselves.

The sentiments found in this card can, unfortunately, be encountered more and more often in the developed world, from people refusing to help other people in times of crises, or all the false pretend Christians and believers who carefully and willfully ignore scripture, which urges them to be selfless and help the poor and meek. Instead, they drape themselves in a twisted version of their faith to justify their selfishness, greed, and intolerance.

Reversed, this card indicates that withholding support for your partner will damage your relationship, especially when you have the means to help them, but do not want to do so for selfish reasons. You may have to look hard at your own insecurities if you are the one doing the withholding; or conversely, you may have to face the selfishness and narcissism of your partner.

When this card appears reversed in a question about school, work, or career, then you may need help, but cannot get the support you want because of the selfishness of the person with resources. If you are the one with the resources and do not want to help, are you refusing for legitimate reasons or just plain greed? If the latter, then you will not enjoy the karma or consequences likely to unfold.