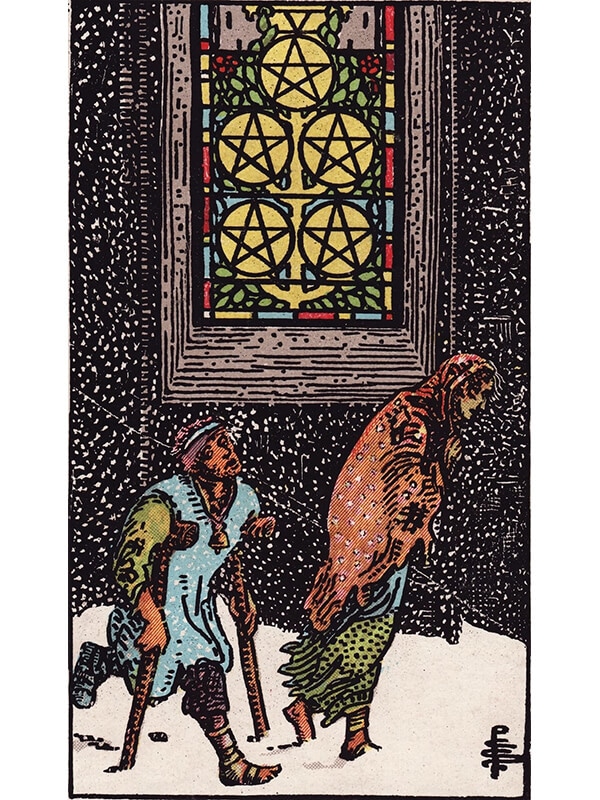 Reversed: extreme loss, living off other people’s resources, excessive spending, and taking advantage of others

Two mendicants in a snowstorm pass a lighted casement. Divinatory Meanings: It foretells material trouble above all, whether in the form illustrated, that is, destitution, or otherwise. For some cartomancers, it is a card of love and lovers—wife, husband, friend, mistress— also concordance, affinities. These alternatives cannot be harmonized. Reversed: Disorder, chaos, ruin, discord, profligacy (Rider Waite Booklet).

Just like the homeless paupers displayed on the illustration of the Five of Pentacles in the Rider Waite Smith tarot deck, this minor arcana card deals with a precarious financial or professional situation, that can get even worse when the arcana card is drawn in a reversed position in the tarot spread.

This is a clearly unambiguously bad card to draw in a reading, sending a clear warning that something problematic is to be found in the situation analyzed in the reading. As such, the other cards drawn along with a Five of Pentacles can either provide some advice on how the existing situation might be altered to change the outcome or provide a clearer incentive to stay away from this current path if possible.

The Five of Pentacles paints a rather depressing picture in the Rider-Waite Smith Tarot deck illustration. The five pentacles are found within the picture of a stained-glass window (probably from a church or cathedral) but the focus of the scene is on the outside of that building.

There are two people outside, obviously homeless and poor, and the rest of the card is covered in heavy snowflakes, setting the situation in the middle of cold winter.

The core Five of Pentacles meaning is the most obvious one you get when you look at the card. In this minor arcana suit, the card conveys a notion of poverty, destitution, and overall lack of funds and resources, creating a difficult situation for the subject of the reading.

As such, it is rather difficult to interpret this card positively, as this is one of the few tarot cards from the suit of Pentacles with a rather negative image and message regardless of the actual position of the arcana in the reading, and whether it is upright or reversed.

On top of the most obvious meaning of poverty and absence of money, the situation of the characters on the outside of the church building (which is often a symbol for inclusion and being part of a group) can also represent a feeling of isolation and alienation for the subject of the reading, a “the world is against us” mentality that keeps them away from meaningful social interactions, which consequently cements their position on the fringes of society, without any means to pull through.

Finally, an upright Five of Pentacles can also mean serious health problems for the subject of the reading, requiring medical treatment and guidance from medical professionals. It might be time for a check-up if you have not had one recently when this card appears.

There is no clear connection between the upright and reversed meanings of the Five of Pentacles and a reading based on love or romantic interests. Consequently, when this card appears in such a reading it is usually to provide context to some other elements or cards in a reading, strengthen an already negative card, or paint a bleak picture of any potential situation or love interest. It might also refer to a precarious financial or professional situation affecting the potential love interest or subject of the reading.

Career encompasses school and education if that is your current stage; work that is necessary, but not what you would consider a career path; and your actual career path. Regardless of your current stage of development, the Five of Pentacles represents failure, material hardship, and financial loss.

If you are a student and this is your card, then you may have to face a failing grade, not being accepted to the school of your choice, or having to drop out of school for financial reasons. You may not “have what it takes” skills-wise or financially to study what you want or get the degree you desire.

If you are doing work that is necessary, but not a career, then there is a good chance you know your job or industry is in jeopardy and you need to act before action is taken against you. You may have already been fired, furloughed, or lost the job due to circumstances beyond your control and you are going to have to look for new work.

If you are in your career, then the Five of Pentacles represents a severe setback, either at the industry level or regarding your own goals. Likely, a significant mistake has been made, and it will be costly. You could see your retirement drained or significantly damaged, and you will have to rebuild if you have time to do so.

When the Five of Pentacles appears reversed in a tarot spread, the notion of poverty and lack of resources is still present in the card meaning but even further enhanced by a clear lack of ambition to get out of the situation. There is a kind of moral lack of resources too, as the object of the reading will usually try to get resources from any potential mark around them, but without any real plan or project to get out of their current predicament.

A reversed Five of Pentacles can also describe a situation where careless spending and lack of long-term view creates a vicious cycle that keeps making a bad situation worse and worse.

Reversed, this card indicates some kind of severe setback with money that will affect the relationship in a profound way. It could also indicate a health problem that would also severely impact the relationship. This is the “for worse” part of the marriage vows when this card appears.

When this card appears reversed in a question about school, work, or career, then you may not only be out of a job but could be losing your personal assets as well. If you are living a debt-driven lifestyle and your income suddenly stops, you could easily find your life repossessed (the bank gets your home and the finance company gets your car).