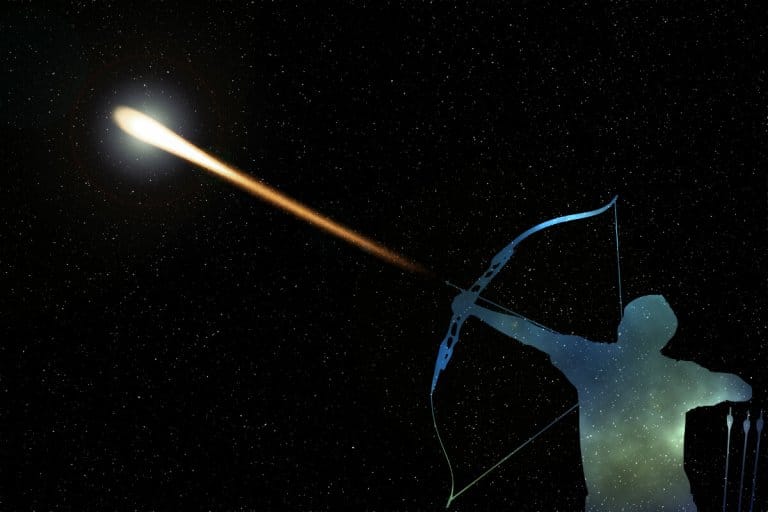 Most of us know our zodiac or sun sign, but what does it look like in the night sky, and what’s the story behind it? This month it’s the turn of Sagittarius.

As with all of the Zodiac constellations, Sagittarius was recorded in the 2nd century by the Greek astronomer Ptolemy. The word is Latin for archer.

Sagittarius is near the center of our spiral galaxy, the Milky Way. There is a massive star-forming region known as the Omega Nebula situated within its boundaries and Sagittarius is also home to the bright blue hyper-giant Pistol Star, one of the brightest stars discovered in the Milky Way. First discovered by the Hubble Space telescope in 1930, it is largely hidden in the dust of its own Pistol nebula but is 100 times as massive as our Sun, and 10,000,000 times as bright.

Sagittarius is the ninth sign in the Zodiac and represents those born between Nov. 22 and Dec. 21.

Greek myth saw Sagittarius the Archer shooting Scorpio the Scorpion, which had been sent to kill Orion the Hunter.

Sagittarius is often confused with another centaur story, Chiron of the Centaurus constellation. Most interpretations conclude that Sagittarius refers to the centaur, Chiron, who was accidentally shot by Hercules with a poison arrow.

This story does indeed refer to a constellation myth, but it’s the myth behind Centaurus, a non-zodiac constellation, and not Sagittarius.

The myth behind Sagittarius probably refers instead to Krotos, a satyr who lived on Mount Helicon with the Muses. Krotos or Crotus was the son of Pan and Eupheme, and his mother had nursed the Muses.

Krotos was renowned for being both an excellent hunter, horse rider and a devoted adherent of the Muses and their arts. He is credited with having invented archery and being the first to use illumination for hunting animals. He is also said to have introduced applause and used to clap his hands at the singing of the Muses, for whom this was a sign of acclaim preferable to any verbal ones. It was the Muses who asked Zeus to place him among the stars, which he did, transforming Krotos into the constellation Sagittarius.

Satyrs have human heads and torsos with two goat legs (and sometimes horns). Centaurs have four but the accounts and depictions of Krotos vary.

Sagittarius is the ninth sign in the Zodiac and represents those born between Nov. 22 and Dec. 21. The archer is seen as a bridge between elements and worlds. The life lesson is seen as Temperance, as pictured in the Tarot card associated with this sign. The message is all to do with the quiet but enormous power of moderation, the art of expert timing, and also self-control, avoiding extremes and addictive behaviors.

There is no such thing in reality as THE Sagittarius personality and the same goes for all the zodiac sun signs. Your sun sign is an archetype, a keynote but of course, it is not and never could be the whole story.

The archetype of Sagittarius is brave, lively, warm, optimistic, rational and insightful.

Sagittarius zodiac sign subjects need constant adventures and opportunities to grow to remain interested. Freedom is of the utmost importance to them, space and plenty of room for maneuver. Likewise, they tend also to give lots of freedom to their partners.

They are generally very capable people but they need career flexibility, and they may refuse to fail to apply themselves if bored.  Like Gemini, they are prone to restlessness, and may fail to stick at a job or a succession of jobs, and may struggle financially in consequence.

They tend to have lots of friends, and family and friends can feel neglected at times when Sagittarius goes go off and travels and shares experiences with strangers, but Sagittarians will always come home.

Next time, the cosmic goat Capricorn…

Waxing Crescent Moon
The moon is currently in Aquarius