The Numerology of the Number 5 in Tarot

Home » Blog » Tarot » The Numerology of the Number 5 in Tarot 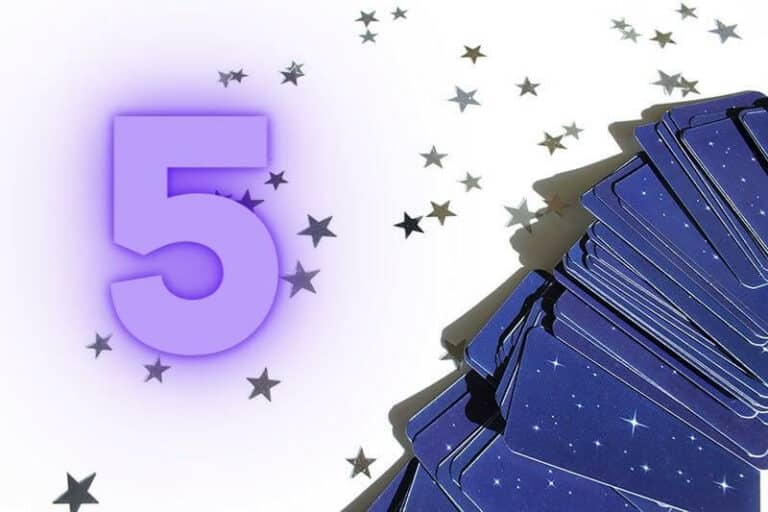 This article will explore the cards of the tarot that represent the number 5.

Six Cards Represent the Number 5 in a Tarot Deck

Each number 5 tarot card exhibits some aspect of this energy.

The Hierophant is usually standing between two pillars, like the High Priestess, but these are not the pillars of the temple of Solomon. He wears the traditional garb and symbols of a religious figure, not unlike a Christian pope. He holds a cross in one hand and uses the other to make a traditional blessing gesture.

You can often see a pair of keys crossed at his feet, as well as some devout priests or faithful disciples kneeling before him.

Where the Emperor represented authority in its most basic and primal form, the Hierophant card represents the authority vested in a religious or spiritual order, and by extension the influence of any organization with a strict and codified set of beliefs, demands, and requirements.

This can also represent a formal and codified commitment affecting the Querent. Marriage, for instance, could be one of the various elements falling within the Hierophant’s purview. Like most major arcana cards, there are several layers to be found in understanding the Hierophant meaning, and context and card associations are important.

The traditional representation of the Temperance card, like in the classic Rider-Waite-Smith deck, is that of a winged figure (an angel with androgynous features, neither male nor female) holding two cups, with water flowing between them.

Another common theme in the depictions of the Temperance card is to have the barefoot angel with one foot on solid ground and one foot in the water, again showing two opposite states brought together by the figure of the angel.

As its name suggests, Temperance in tarot is meant to suggest the importance of balance, objectivity, and patience for the problem at hand. While most people would really agree that extremes are bad in matters of politics or religion, the meaning of the Temperance card reminds us that extremes are just as bad in any other aspect of life.

The meaning of the Temperance card can also be a call for better management of your schedule and priorities, or a warning against excessive spending and impulse purchases, especially when your finances are low.

Reversed: self-pity, lack of efforts, downward spiral, and the burden of the past.

Another lone figure standing on an empty location, his back turned to the reader, the Five of Cups in the traditional Rider Waite Smith tarot deck seems to wander aimlessly on a large field. There are several chalices on the ground, as though abandoned – willingly or not. Three of them are turned over on the ground before him, while two additional cups stand behind him, but he is oblivious to their presence.

Like the Four of Cups that came before, there are almost no positive elements that can be found in this minor arcana, with nothing much to say or do to change this situation. The obvious sad posture of the character, combined with a long and ominous black cloud, tends to refer to some solemn moment for the Querent. A feeling of loss, frustration, and bitterness that can heal in time, but will always leave a mark.

Mourning serves a purpose, however, and if the Querent can avoid wallowing in self-pity, this minor arcana card of the suit of Cups could represent the very beginning of the healing process necessary to get their head back in the game and move on to the next chapter of their life.

Reversed: extreme loss, living off other people’s resources, excessive spending, and taking advantage of others

The Five of Pentacles paints a rather depressing picture in the Rider-Waite Smith Tarot deck illustration. The five pentacles are found within the picture of a stained-glass window (probably from a church or cathedral) but the focus of the scene is on the outside of that building.

There are two people, obviously homeless and poor, and the rest of the card is covered in heavy snowflakes, setting the situation in the middle of a cold winter.

The core Five of Pentacles meaning is the most obvious one you get when you look at the card. In this minor arcana suit, the card conveys a notion of poverty, destitution, and overall lack of funds and resources, creating a difficult situation for the subject of the reading.

As such, it is rather difficult to interpret this card positively, as this is one of the few tarot cards from the suit of Pentacles with a rather negative image and message regardless of the actual position of the card in the reading, and whether it is upright or reversed.

On top of the most obvious meaning of poverty and absence of money, the situation of the characters on the outside of the church building (which is often a symbol for inclusion and being part of a group) can also represent a feeling of isolation and alienation for the subject of the reading, a “the world is against us” mentality that keeps them away from meaningful social interactions, which consequently cements their position on the fringes of society, without any means to pull through.

There are three visible characters in the Ride-Waite Smith tarot deck version of the Five of Swords. Two of them are in the process of leaving the scene, moving towards the background, heads down in shame and defeat. In the suit of Swords, this main character in the foreground has a proud smile on his face. He seems to be collecting swords, two piled upon his shoulder, a third on his right hand, and two more on the ground.

You can easily imagine the scene that came before the one displayed on the card. There probably was a sword fight between the protagonists, and the one collecting swords is the one who won.

It is possible to say that the main Five of Swords meaning is not positive or negative, but neutral. It represents a conflict between various parties, a clash of opposing viewpoints with no real way to find common ground. Even the victor potentially loses since the agreement could not be resolved peacefully.

In the Rider Waite Smith deck, there are five men fighting on the image of the Five of Wands. These men each swing a staff as they try to strike one another.

It should be noted, however, that the men are fighting with what amounts to wooden sticks instead of swords or more serious weapons, which tends to imply that this is either some sort of deliberate training (like martial artists or some kind of sports exercise).

What is positive though, when the card appears on the upright in a spread, is that it usually means that the conflict should have no lasting effects on the relationship of the people involved. This struggle could also represent a friendly competition to test everyone’s strength.

The Numerology of Serena Williams

How Punctual Are You Based on Your Zodiac Sign?