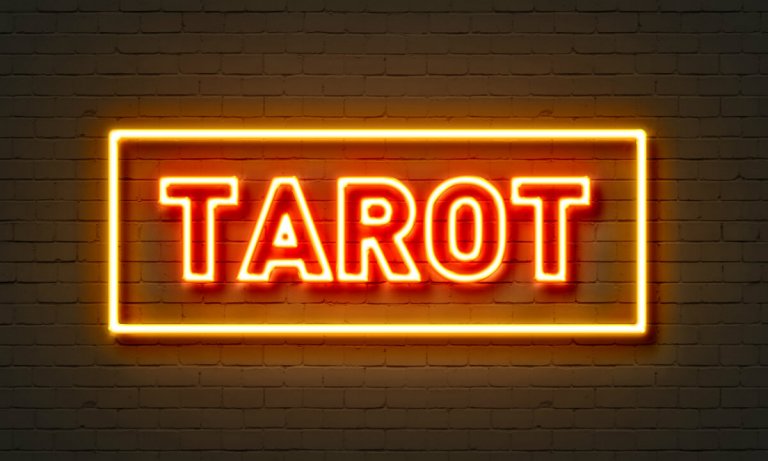 Once shrouded in mystery and a “tool of people with questionable character, dark intentions, or acolytes of heathen beliefs”, tarot and oracle cards are enjoying widespread, if still hesitant acceptance.  In this article, I want to share my discovery of tarot and its extremely positive uses in my life and the lives of others.

Tarot cards are certainly much easier to find today than they were when I found my first tarot deck, back in 1989.  I was 21, had just graduated from the University of North Carolina at Chapel Hill with my Bachelor of Arts in History, and had the summer off before starting my Masters in English.  This was just before Barnes and Noble became a publicly-traded company and the definitive standalone book superstore where you could find plenty of anything.

At that time, in Greensboro, North Carolina (NC), the main bookstore was Waldenbooks and it was located in an enclosed mall known as the Four Seasons Town Center.  One night, in the middle of the summer, late June or early July, I went to the mall to wander around.  Summers in NC are quite hot, even after the sun has gone down, so air-conditioned spaces are the places to be.

I frequented Waldenbooks regularly, usually looking for good science fiction or fantasy novel to read. This particular evening, I noticed a new section labeled “New Age”, where I found a few books on dreams, Wicca, gemstones, spirit animals, astrology, and exactly two tarot decks. One deck, not surprisingly, was the Rider-Waite Tarot and the other was the Mythic Tarot.

Now, a bit of cosmic kismet occurred when I pulled the Mythic Tarot off the shelf.  As I mentioned above, I graduated with a History degree. My area of specialty was Ancient Greece, specifically the Athenian Period (the rise and fall of Philip of Macedon and Alexander the Great).  The Mythic Tarot is based on Greek Mythology, specifically the four stories of Eros and Psyche, Jason and the Argonauts, Orestes, and Daedalus for the suits of the minor arcana and the gods and goddess of the Greek pantheon for the major arcana.

I purchased the deck that night.

Admittedly, I only had a vague and pop culture knowledge about tarot, mostly derived from a James Bond film, Live and Let Die.  In the film the “kind” love interest (instead of the femme fatale), played by Jane Seymour, is a tarot card reader named Solitaire, who has the gift of sight, which she uses when reading tarot cards.  So long as she remains virginal, she has her gift.  But, of course, she succumbs to James Bond and goes to bed with him, thus losing her ability and making her useless to the main villain (or so we are led to believe).

The cards are presented as mysterious, dangerous, and prophetic.  But the character Bond is not really interested in the power of tarot as much as he is in the conquest of Solitaire.  So, in the key seduction scene, she draws the Lovers card and accepts her fate to be Bond’s lover.  As they kiss and the cards spill onto the floor, we see that Bond has replaced all the cards with the same card, the Lovers.

Regardless of the magic, presented as fact before the seduction, or the trickery, presented to pull off the seduction, the cards proved to be an enduring and imaginative prop in the movie because they were largely associated with black magic or the “dark arts”.  They certainly got lodged in my imagination.

In yet another gesture from the hand of fate, the Mythic Tarot brilliantly included a workbook that asked the owner of the cards to write journal entries about each card as the card related to an experience in his or her life.  I worked my way through the journal during the remainder of the summer and simply loved learning the cards.

From Learning to Use

I love learning new information, problem-solving, and real-world applications.  The tarot cards, especially the Mythic Tarot, gave me a feast of all three.  Had I purchased the Rider-Waite Tarot, there is a good chance I might not have found my way into tarot until much later.  I really have no interest in the late 14th and early 15th-century European culture or history.  But to find a deck built on one my first loves in life and knowledge, Greek mythology, that is the hand of destiny popping me upside the head!

The workbook was genius.  Truth to be told, I knew some of the myths and stories in more detail and nuance that the author of the deck, which just made it that much easier for me to connect with the cards and write about my personal experiences.  I have included a scan from one of my workbook pages for you to see how it was designed and what I wrote at the time.  The deck was released in 1986 and re-released in 2011.  Sadly, the 2011 edition did not include the workbook. 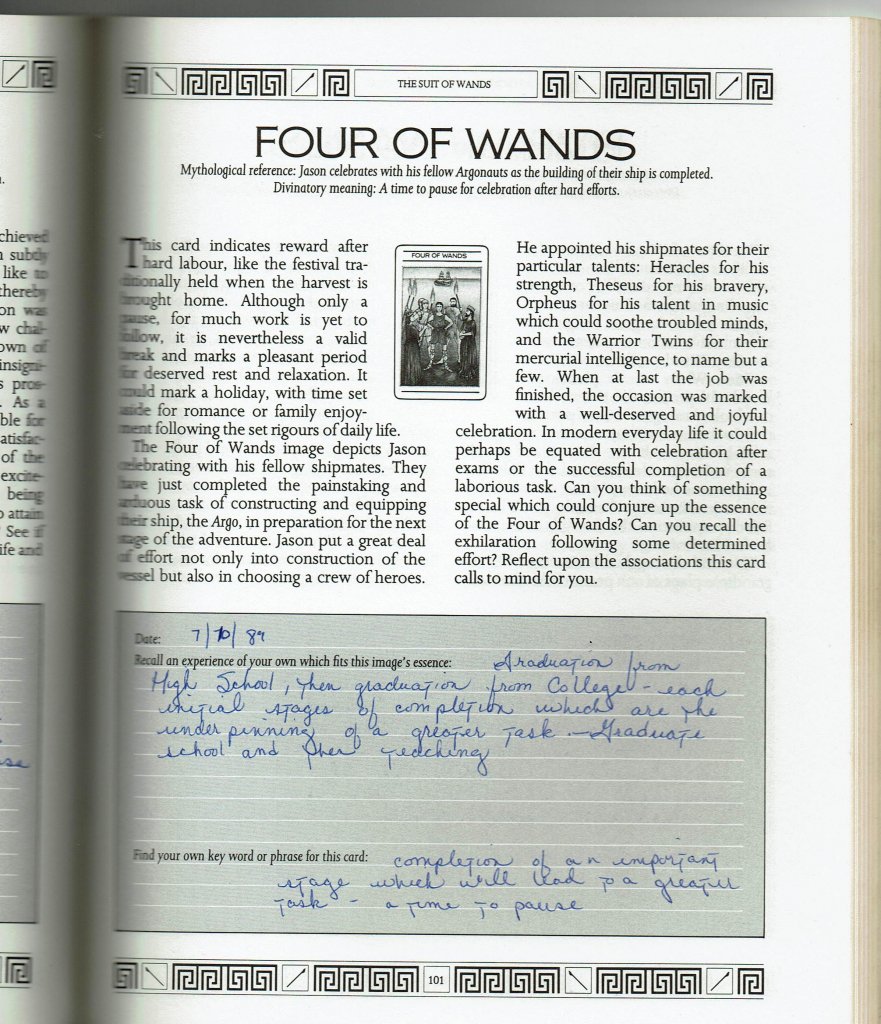 After working through the cards, I decided to try the reading process with a simple three-card spread, Past/Present/Future.  I will admit that the first time I shuffled the cards, with the intention to draw them to get an insight about my past, my present, and my future, I was pretty excited.  Thirty years later, I am just as excited, whether drawing cards for myself or guiding a client through a reading with his or her drawn cards.  That first thrill has never diminished; in fact, it has gotten stronger and more complex with reading after reading.

I do wish photos were as easy to take then as they are now; I would love to have a picture from that day.  Those first three cards are lost to me, but the feeling of the moment is not, I tap into it with each new reading.  I know the temptation to want the cards to function as they were presented in Live and Let Die (determining a specific future or outcome), but they really are so much more useful when used and viewed as a tool for critical and creative thinking than as a tool to “sneak a peek” into some pre-determined future hope or sought after outcome.

It was not very long after doing my first reading for myself that I wanted to try reading out on a friend, and surprisingly, I did not have to try too hard to find someone willing to give it a go.  After I found reading for myself so very helpful, I discovered reading for others proved insightful and helpful to them.  Years later, in 1992, I was working with my cards in a coffee shop on campus, where it did not appear odd in the least.  A graduate student a few years older than me approached and asked for a reading.

I did a standard Celtic Cross, 10-card reading for him and he was so impressed that he paid me $20 for the experience. Not long after that, I started getting the chance to read for people regularly and for pay; it was nothing I could do full-time, but it did generate some enjoyable income.  All along the way, the usefulness and positive impact reading the cards provided me and others only increased.  Hopefully, you will get a chance to discover tarot for yourself and will be just as amazed.