The Astrology Chart of Queen Elizabeth I

Home » Blog » Astrology » The Astrology Chart of Queen Elizabeth I 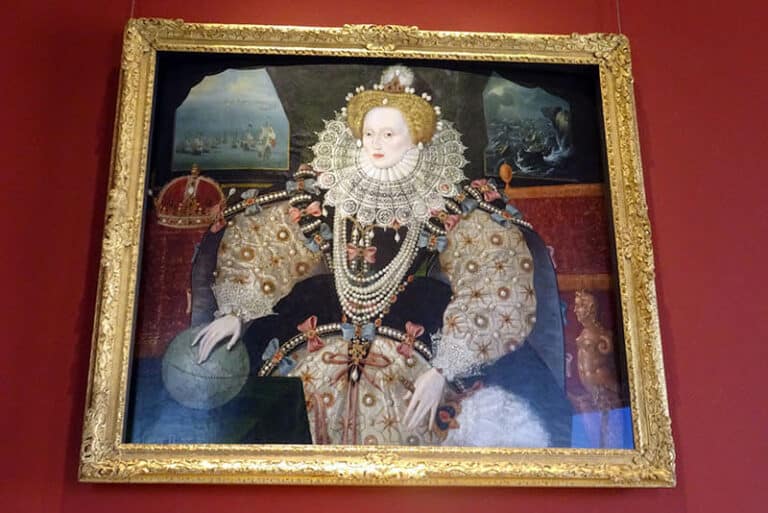 Queen Elizabeth the first ruled England from 1556 until 1603. She was the daughter of Henry the 8th and Anne Boleyn. Considered by many to be one of England’s greatest rulers, she ruled successfully for almost 45 years.

She is an important historical figure because of her tremendous and enduring impact on the history of England. She established Protestantism in England, formally ending English fealty to the Roman Catholic Church. In 1588, under her reign, the British Navy defeated the Spanish Armada. England enjoyed internal peace during her long reign and the arts flourished.

Her primary triad – Sun, Moon, and Ascendant – consists of Virgo, Taurus, and Capricorn respectively. It is important to understand that nothing about this chart guarantees a “great person”. But what would be clear from this chart is a design for someone to be practical, stable, and ambitious – guided by her three main points all being in earth signs. She would also stand out as creative, and authoritative because her Moon and Sun occupy fire houses (the 5th and 9th, respectively).

Moving beyond the Sun and Moon, we can see that her Jupiter is in the sign of its rulership, in Sagittarius, in the 12th House of Spirituality and Purpose. She would “aim high” with this energy. Additionally, her chart ruler, the point that rules the Rising Sign (Ascendant) is Saturn, which resides in Cancer in her chart, making her a person very much concerned with personal responsibility as well as responsibility for others.

Famously known as the Virgin Queen because she did not marry or have children, we can see she would take a non-traditional approach to relationships thanks to Uranus in her 7th House and nearby her chart ruler, Saturn. With only the North Node in her 8th House of Intimacy and Shared resources, it is not surprising that she would not want to “share the spotlight” with a partner, knowing a marriage would essentially dim her light and her importance. It is likely that she did have love affairs, with her Moon in the 5th House, but they would have been private or secret thanks to the Taurus and Imum Coeli influence.

With the Sun in Virgo, it “disposits” (look for guidance) to Mercury, which happens to be in Libra in the 10th House of Prosperity. Mercury disposits to Venus, which happens to be in Libra as well, and thus in its sign of rulership. Therefore, the final dispositor of the Sun is Venus in the 10th House, which would certainly make her adept in powerful relationships and more than capable of handling the affairs of the kingdom.

With her Midheaven (MC) in Scorpio and its ruler, Pluto, in Aquarius, she would attain success and build a legacy through her role as a “healer/Shaman” for the community (MC in the 11th House) and in a unique way by learning to take care of herself (Pluto in the 2nd House). Throw Ceres, Mars, Vesta, and Pallas Athena into the mix, all in Gemini, and all looking to Mercury in Libra, which ends up looking at Venus in Libra, and you have a highly intelligent individual committed to service (6th House) and leadership (10th House).

Queen Elizabeth never married and did not have any children. With Lilith and Chiron in Aries and her 4th House, she would not want to be restricted or limited in any way. Her wound to heal (Chiron) revolved around independence and maverick behavior, which would have found a very willing partner in Lilith, which is the energy of “unyielding” in our charts.

Personal relationships would never be as easy as public ones; she is certainly more at home in her regal role than she would have been anywhere else. With her South Node in Aquarius and the 2nd House, her Karmic lesson would have involved being “trapped” by her society had she taken on the traditional role of wife and mother. The only way she could hope for a “grand partnership” while retaining the spotlight Leo so craves and thrives under, would be to stay out of the traditional roles. She rather deftly maneuvered through her Nodes.

With prominent squares between Mercury and Uranus, and her Ascendant/Juno and Chiron/Lilith, she would likely struggle to be understood and have to put up with people who were not as smart or as sharp as her. She would not be able to rule and be “feminine”, and these challenging aspects would have played in her favor by choosing to remain aloof from traditional female roles.

It is more common than not for a chart to have empty houses and tight groupings of points, but Elizabeth has a surprisingly well-distributed chart, with points in every sign and all houses. She does not have any traditional stelliums (three or more points tightly interactive by orbs of influence).

But she does have a few standout features, namely three points in their signs of rulership, Venus, Jupiter, and Neptune. And one is in its traditional house of rulership, Jupiter. Additionally, Jupiter is void, of course, having no aspects. It is “floating alone” and disconnected in the chart, which is an apt correlation to Elizabeth’s role as a ruler, which set her so completely apart from the norms of a woman in society during that time.

Neptune is also interesting, at the very end of the degree in Pisces, and retrograde, in the 3rd House of Communication. This placement would give her tremendous intuition and insight, probably at a profound psychic level. Her skill as a communicator and level of intelligence are both quite strong in this chart design.

It is possible that another person might have been born on the same day, around the same time, and maybe even along the same longitude, so they would end up with the same design regarding the placement of Points in the Houses. They would have the same traits as Queen Elizabeth, but perhaps not the same drive or spirit. Elizabeth was a driven and powerful woman perfectly suited to lead.