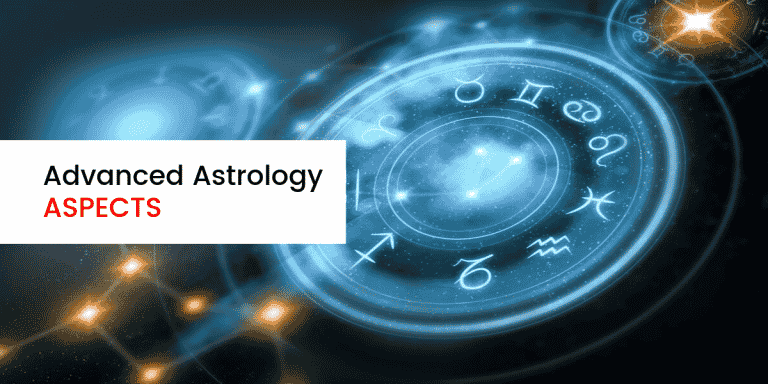 This article will begin a series on advanced astrology topics and techniques.  Basic astrology works with the foundational understanding of signs, points, and houses, as well as concepts like archetypes and simple interpretation.  The first level of interpretation starts with understanding what it means for a point to be in a sign, then in a house, and then “the big leap”, in a sign AND a house.

In my article, The Five Keys to Astrology, one of the keys involves making a huge leap forward with interpretation, understanding aspects, which is a term used to describe a certain degree to degree energy links between two points. So, this article will explore what it means to have a point in a sign AND house-sharing energy with another point in a sign AND house.

When you look at an astrology chart, there is a circuit board that appears in the center, showing the various ways points connect energetically with one another to make up the complexity of your chart.  Using the most common points and a few asteroids, below is a chart cast for today, the day I am writing this article:

Conjunction actually refers to a 0-degree connection, but a certain orb of influence is taken into account, usually around 5 degrees before and after the actual exact degree.  The sextile, which is not considered as strong as the rest has 2 degrees of leeway around 60 degrees.  The exact degree of the square is 90, the trine 120, and the opposition 180.

The Meaning of Each Aspect

Each aspect performs a certain task when joining the energies of two points.  The conjunction merges energy; the sextile helps energy flow (compliments); the square charges and challenges energy; the trine supports energy flow (collaborates); and the opposition attempts to balance energy.  An astrology chart can get pretty complex pretty fast.

A Specific Example from the Chart Above

The Sun (red circle with a red dot) in this chart is in Virgo and the 9th House: (P)oint + (S)ign + (H)ouse = Interpretation. The Life Path (Sun) for this individual will be about service (Virgo) through the mastery of knowledge (9th House).  There is a trine between the Sun and Vesta (the green tree-like symbol in the 5th House).  The Sun, which moves faster, is at 24 degrees of Virgo and Vesta is at 27 degrees of Taurus, so the Sun is approaching Vesta and building energy.

This person’s feelings about home (Vesta) will be concerned with stability (Taurus) for his or her children (5th House).  The trine relationship pulls the Sun in as a collaborator so the individual can use his/her expertise to provide a secure life for his/her children.  The formula for this one aspect would be written this way: P1 + S1 + H1 trines with P2 + S2 + H2 = Interpretation.

As you can see the complexity for interpreting just this one aspect adds a rich dimension to the understanding of the chart. Since the Sun is approaching in this aspect, the energy the person to provide for his/her children will be available and reliable.  If the aspect were separating the energy would still be stronger than no aspect between the points, but not as strong as the approaching aspect.  It would probably show up as the difference between “excess” provisions and “just enough” provisions.

Lastly, sometimes aspects will form geometric patterns, which add even more complexity to the chart interpretation.  If you look at the chart above and revisit the three points Mars, Jupiter, and Neptune, you will see that Mars and Neptune form an opposition (180 degrees apart), creating a large triangle out of the three points, referred to as a T-Square.

We now have to interpret P1 + S1 + H1 (Mars) opposing P2 + S2 + H2 (Neptune) squaring P3 + S3 + H3 (Jupiter) squaring P1 + S1 + H1 (Mars) = Interpretation.  This individual has the potential to be a great spiritual leader if she or he can find a connection with someone that helps complete the T-Square into a full square with energy from Gemini around the 16th degree.  If not, the energy could lead to charlatanism and bombast.

Once you pierce the veil of advanced astrology, either in your own study of it, or by seeking a consultation with a professional, you will have the opportunity to unlock the full potential of astrology in your quest for self-understanding, understanding others, and moving more comfortably and successfully through life.

Which Wild Animal Are You According to Your Zodiac Sign?

The Owl Totem in the Native American Zodiac