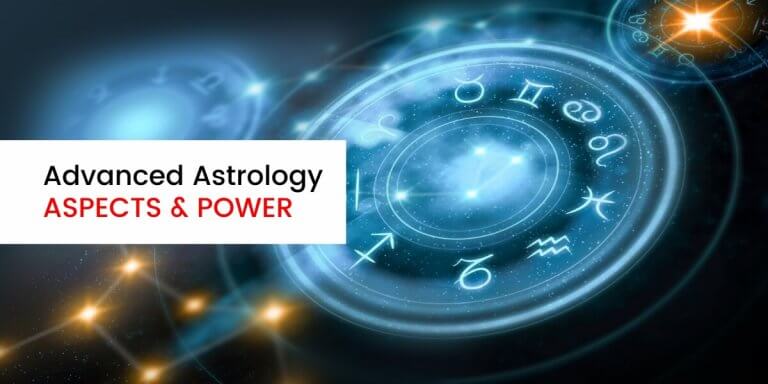 This article is part of a series on advanced astrology topics and techniques.  Basic astrology works with the foundational understanding of signs, points, and houses, as well as concepts like archetypes and simple interpretation.  The first level of interpretation starts with understanding what it means for a point to be in a sign, then in a house, and then “the big leap”, in a sign AND a house.

In my article, The Five Keys to Astrology, one of the keys involves making a huge leap forward with interpretation, understanding aspects, which is a term used to describe certain degree to degree energy links between two points. This article will explore the building up and letting go of energy when an aspect is approaching, exact, and separating.

When you look at an astrology chart, there is a circuit board that appears in the center, showing the various ways points connect energetically with one another to make up the complexity of your chart.  Using the most common points and a few asteroids, below is a chart cast for September 17, 2019: 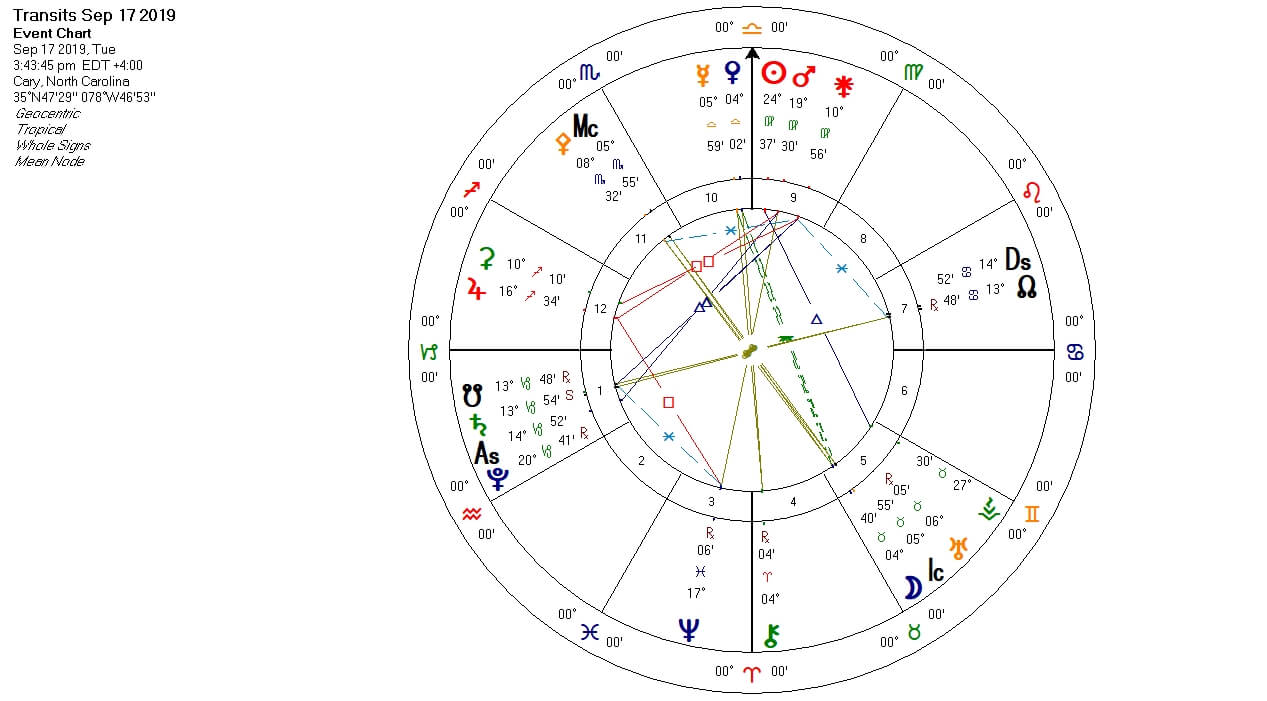 A conjunction actually refers to a 0-degree connection, but a certain orb of influence is taken into account, usually around 5 degrees before and after the actual exact degree.  The sextile, which is not considered as strong as the rest has 2 degrees of leeway around 60 degrees.  The exact degree of the square is 90, the trine 120, and the opposition 180.

In the chart above, in the 12th House, Ceres (the green symbol that looks like a scythe) and Jupiter (the red symbol that looks like a fancy number 4) are on their way to becoming conjunct.  Ceres is at 10 degrees of Sagittarius and Jupiter is at 16 degrees of Sagittarius.  They are outside the orb of influence if we allow 5 degrees before and after Jupiter, the stronger of the two points.

Ceres moves faster than Jupiter so it is approaching and will get within the orb of influence, become exact, and separate within 39 days.  At that early stage in life, it is not likely to mean too much to the person with this chart.  However, there is a special calculation astrologers use, called secondary progressions, which measures 1 day = 1 year of a person’s life.  So, at the age of 39, these two points will merge, meaning something very significant for the person at that time.

In this case, the person has been born with the potential of the merger of Ceres and Jupiter.  This merger is significant because Ceres represents the harvest and Jupiter represents expansion and gain.  In predictive astrology, this would indicate a year of “fruition” of efforts put forth under the influence of the approaching conjunction of the two points.

Interestingly, because the orb of influence is not in effect at birth, it will take at least 8 to 9 days before entering an influential range.  So, at 8 or 9, this person would begin to feel and attract the benefits of this merger.  They might discover some rewards from athletic or academic achievements that they could build upon for the next 30 years.  After 40, the energy would have done all it could to build up to its peak moment, then it would start declining.

Now, let’s consider Mars (the red symbol that is a circle with an arrow going off to the top right) and Jupiter.  Mars is at 19 degrees of Virgo and Jupiter is at 16 degrees of Sagittarius.  These points are in a square or challenging relationship.  This type of alignment can indicate a certain kind of recklessness since Mars is aggressive and Jupiter is expansive; there really is no break in either of their behaviors.  They both have a “heavy foot” when stepping on the gas.

Fortunately, this energy is separating at birth and will only get more separated with time, by progression calculations. Think of it this way.  If this energy was approaching and more exact, this would be a person who might gamble easily or take some fairly high risks.  But with the energy separating, they are much more likely to enjoy risks that do not result in heavy consequences.

To illustrate the point, consider something like fantasy football (really you can do it with any sport).  In the game of fantasy football, you field a team of players from all the teams and then keep up with individual stats to find out if your chosen (drafted) team can beat another person’s chosen team each week.  You join a league to participate, and some leagues and involve very large sums of money, while other leagues just involve bragging rights.  The person with this separating aspect will prefer to play in the bragging rights league and not the heavy money league.

Something Interesting About This Chart

Here’s where it gets very interesting.  The first (approaching) aspect I described is actually one to support making significant gain over the first half of life, but the second (separating) aspect can keep the person from moving into a risk level that could result in truly big gains.  What helps is the orb of influence of the second aspect, which is already near its end by being 3 degrees apart.

So, this person will be risk-averse early on (like age 0 to 5) but settle into a more average risk level (as if there were no aspect) once the progression fully separates the energy well before they turn 10.  Meanwhile, the approaching aspect just gets stronger.  If this person makes investments, they may be “surprised” to see their choices yield better than average results against the mean thanks to increasing potency of the Ceres/Jupiter merging over time.

Mercury to Mercury: How I Say it and How You Hear it!