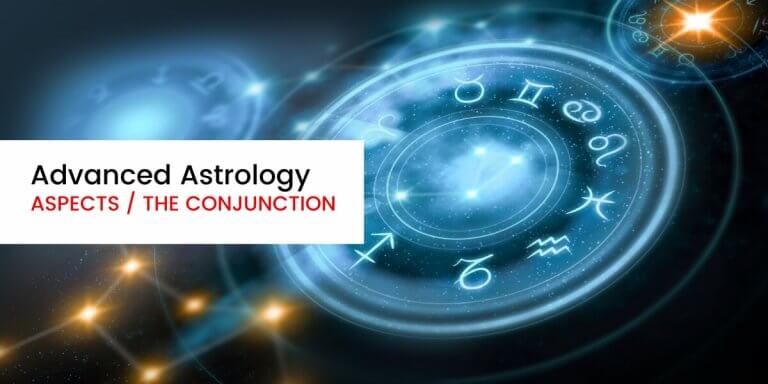 This article is part of a series on advanced astrology topics and techniques.  Basic astrology works with the foundational understanding of signs, points, and houses, as well as concepts like archetypes and simple interpretation.  The first level of interpretation starts with understanding what it means for a point to be in a sign, then in a house, and then “the big leap”, in a sign AND a house.

In this article, we will look at the concept of the aspects, how points relate to one another by degree and angle in the chart wheel.  The example we will explore is the conjunction, which happens when two points are within 0 to 6 degrees of each other.

Based on the day and time of your birth, all astronomical points end up at a certain degree of a certain sign.  When I was born (9:39 pm on 4/12/1968), the Sun was at 23 degrees and 14 minutes of Aries and the Moon was at 21 degrees and 56 minutes of Libra.  Aspects occur when points are in a special degree relationship with one another, forming an energetic circuit between the two points.

Over the history and course of the study of astrology, astrologers discovered that certain of these aspects proved quite powerful.  The most prominent angular relationships between points are the conjunction (0 degrees apart), the square (90 degrees), the trine (120 degrees), and the opposition (180 degrees).

When points are conjunct, they merge energy.  When they are square, they catalyze each other.  When they are trine, they support each other.  And when they oppose, they seek balance from one another. To understand your astrology fully, you need to know each point in a sign and house.  If points aspect, you need to understand how they influence each other, forming circuits that collectively make up the “motherboard” of your celestial design.

Using my Sun and Moon as an example, the Moon moves faster than the Sun (in relation to the earth, and our astrological “point-of-view”).  Since my Moon is at 21d of Libra and does not retrograde, it is advancing to 22d, then 23d, and so on.  The Sun also does not retrograde but moves slower, so the Moon will eventually “catch up” to the Sun and pass the opposing degree. Therefore, in my Sun/Moon opposition, the aspect is an approaching one.

Approaching aspects indicate that energy is building, gaining strength, and developing.  If one of the points in the aspect is past the exact degree and separating, then the energy is dissipating, releasing energy, and dissolving.  The closer the degree of the aspect to exact, the stronger it is.  In the case of my Sun/Moon opposition, the degree of difference is only 1d 18m, which means it is a very intense aspect in my chart.

Below is my fully rendered and aspected chart, using the most prominent aspects: conjunction, square, trine, and opposition (there is no line for conjunction, just look at points that are side-by-side and see which ones are within 6 degrees of each other).

The conjunction is considered the most powerful of the aspects because energies between two points merge and blend together.  If three or more points are conjunct, the grouping is known as a stellium, which makes for an intense focal point of energy in a person’s chart. Most commonly points will merge in the same sign and house.

However, with the orb of influence and different house systems, it is possible for points to merge “out of sign” and “out of house”.  Such conjunctions make for interesting interpretations among astrologers and as part of astrological philosophy.  For example, in Hellenistic astrology, the house system is Whole House, so signs and houses do not mix – one sign for one house.  If two points were on the edge of two signs and within an orb of influence, they would NOT be considered conjunct by Hellenistic astrology interpretations.

Most modern astrologers would still consider the points conjunct if they were using the Whole House system and the points were within orb and make an interpretation with the blending of the two different signs and houses.  If they were using the very common Placidus system, then it would also be possible for points to be “out of sign” but in the same house or “out of house” but in the same sign since signs and houses can overlap in the Placidus system.

I have a number of points conjunct in my own chart, most prominently in the sign Aries and the 6th House.  Using the 6d orb of influence I have a conjunct “train” or stellium starting with Chiron at 0d, going to Venus at 5d, Mercury at 10d, Saturn at 16d, the North Node at 18d, and ending with my Sun at 23d.

Using my Sun as my focal point, I cannot speak about or understand my Sun without also accounting for the merging influence that reaches all the way to Chiron some 23 degrees away, thanks to the connecting points between the two.  The North Node is by far the strongest influence since it is closest.  This conjunction makes for a very important distinction in my chart.

Looking at the sheer number of points I have in Aries, one would assume that I would or should exhibit a very “pure” Aries personality.  However, the North Node is our “learning point”.  As a result, no matter how much Aries energy I have, I am ultimately in this life to “learn how to be an Aries” rather than to “act out” as an Aries.

And what do I get from the other merged points?  Well, with Saturn, I get self-disciplined energy.  With Mercury, I am forthright and direct when I communicate.  Venus means that I prefer to be autonomous or independent in my relationships with others.  And Chiron influences my Sun by having me work on wounds and healing related to my survival and independence.

Your chart likely has several conjunctions, if not a stellium, and which points merge with which points will tell you a tremendous amount of information about your design and how you use it or “get used by it”.