The 6 Great Transits of Your Lifetime

Home » Blog » Astrology » The 6 Great Transits of Your Lifetime 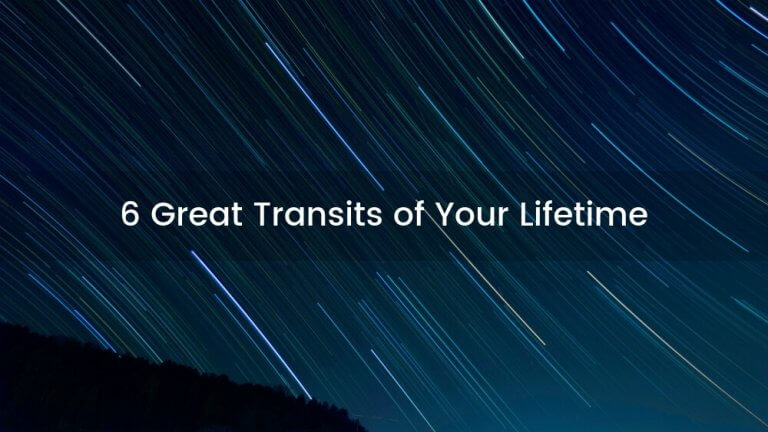 This article will explore the 6 great transits we all experience roughly the same time in our lives, starting with the Saturn Return at 27 to 29, then Pluto square Pluto at 36 to 39, Neptune square Neptune at 40 to 42, the Uranus Opposition at 42 to 44, the Chiron Return at 49 to 51, and the 2nd Saturn Return at 57 to 59.  With knowledge about these transits you will better understand where you have been (if any or all have already passed) and what to expect (if some, or all of them are in front of you!).  Subsequent articles will be posted detailing each major transit, be sure to read them all!

What is a Transit?

Imagine you are in a room looking at a holographic projection of the solar system for the month, day, and year you were born.  The projection is “moving” in real time.  The Sun, all the planets, moons, and asteroids are to scale and moving at their appropriate speeds.  You are looking at the Earth at the location where you were born.  As the motion and timing reach the moment you take your first breath, a red dot appears at that location of your birth and the movement stops.  On the console there is a print button, which you hit, producing a print out of the layout of the solar system at that moment.

The print out converts astronomical bodies into glyphs and compresses the essentially elliptical design of the solar system into a round circle divided into twelve segments.  Each segment is assigned a Zodiac sign based on the Sun’s relation to the horizon on that day.  For example, I was born at 9:39 pm on April 12, giving me an Aries Sun at night, which determined that it crossed the horizon that day in the sign of Scorpio, so I have a Scorpio Ascendant or Scorpio Rising.  This print out is your chart.

After you print out your chart, the holographic projection restarts its motion and keeps running in sync with time advancing.  What makes this particular hologram unique is that it moves the solar system with the Earth as the center, not the Sun.  Now, imagine that you call up the fixed hologram of your birth moment and superimpose it on the active and moving hologram.  Over time, what you will notice is that certain astronomical bodies will “transit” and connect with other bodies throughout your lifetime.  The most obvious ones occur when a moving body moves directly over one of your birth bodies, known as a conjunction or return.

An aspect is a relationship between two points in a chart based on a geometrical angle, which astrologers have recorded as important.  The most powerful and influential of these angles occur at 0 degrees (when points are “on top of” each other), 90 degrees, and 180 degrees.  These angles are determined by viewing the relationships of the points from the position of the Earth.  In other words, if I were to “stand on” Earth, look up in the sky and find Venus, then on a particular day, begin rotating until I locate Jupiter and my rotation takes me 90 degrees, then Venus and Jupiter are in a significant aspect with one another.  This aspect is known as a Square.

Other important angular aspects include 120 degrees and 150 degrees.  Of lesser strength, and thus lesser importance is 60 degrees, 30 degrees, and 72 degrees.  Every notable degree from major to minor have specific names and meanings, provided in the chart below:

Each point moves at different speeds and will form certain angles with your birth points at certain times throughout your life.  Some points, which move rather fast (like the Moon, Mercury, and Venus), will “return” to the same degree as your birth point frequently and regularly throughout your life, which is true for all of us.  The best-known return is your Solar Return, which is essentially your birthday, but not necessarily the same day as your birthday.  Why? Because the Solar Return is based on when the Sun returns to the same degree as your birth Sun degree, which may or may not, occur at the same time on the same day.  Sometimes the degree return can actually be the day before or after.

A transiting point squares your natal point when it is 90 degrees apart and opposes when it is 180 degrees apart.  All points hit these major angles in their cycle around the Sun and in relation to Earth.  Some cycles complete frequently and regularly in your life (Sun, Moon, Mercury, Venus, Mars – 3 years and less), while others take longer to cycle (Jupiter/12 years, Saturn/28 to 29 years, Chiron/50 years, and Uranus/84 years).  Some will not complete a cycle in our lifetimes (Neptune/approximately 165 years and Pluto/approximately 245 years).

Saturn is the point associated with rules, structures, and order.  It “defines”.  Every 28 to 29 years it will return to the same degree it was in when you were born.  When it does, it acts as a pressure test for every aspect of your life.  It is also the period of time when you are to begin “defining” yourself in your own terms and not those of your youth and early life, which were dominated by all the rules of those around you, beginning with your parent or parents, and extending to school, peers, and employers.

Pluto is the point associated with transformation, elimination, and death/rebirth.  It “upheaves”.  Because it takes so long to cycle (roughly 245 years) the first square is the most significant in our lives because it represents a period of intense transformation as part of the “quickening” towards our authentic purpose, which is designed to emerge during the Uranus opposition around 42 to 44.

Right on the heels of Pluto’s “upheaving”, and sometimes overlapping, depending on your chart and the movement of the points after your birth, Neptune will also square itself.  Neptune is the point associated with surrender, spirituality, and mystery.  Like Pluto, its long cycle makes the first square the most important for us.  I describe it as the Fog of Life because it can be a time of confusion, unclear direction, and dissolving leading to a spiritual awareness of your life purpose.

As the final part of the Kundalini Rising work between 36 and 44 (Clow, Astrology and the Rising of Kundalini), the Uranus opposition is designed to “shock” us into awakening and embracing our authentic selves.  This period of life can be, and is supposed to be, intensely disruptive, both internally and, if necessary, externally.  While you may find yourself swimming in the Fog of Life with no shore in sight, the Uranus opposition is like a lightning strike that instantly burns away the fog so you can see clearly where you are and where you need to go!

Some may argue that the Uranus opposition is the mid-life time and often one of crisis, in that way that only Uranus can deliver a shakeup!  I tend to favor the idea that the Chiron Return is the ideal mid-life moment, suggesting that with a better diet, exercise, and medical breakthroughs we will see more and more people living closer to 100 (instead of a max of somewhere in the 70s; in America, the current average is 78).  When Chiron returns you should be ready to heal your spiritual wound; we all get one at birth based on the position of Chiron in our chart.

By the time we reach our second Saturn Return we should have started our authentic journey at around 30, experienced a chrysalis transformative period between 36 and 39, emerged confused in order to find faith in our path, been shocked out of confusion to fully awaken to the authentic self that should have begun developing at 30, healed our lifelong spiritual wound, all to become a wise man or woman ready to impart our knowledge and wisdom responsibly to the generations behind us.  We are to assume more, not less responsibility, and act as guiding lights for improving civilization.

This article is a lead article for the 6 essays that will follow, each dedicated to one of these major transits. As I write, I am on the tail end of my Chiron Return (51) and will be spending the next six years preparing for my passage into a role as a wise man, hopefully!  Join me for the other articles, especially if find yourself in the midst of one of these transition periods right now.