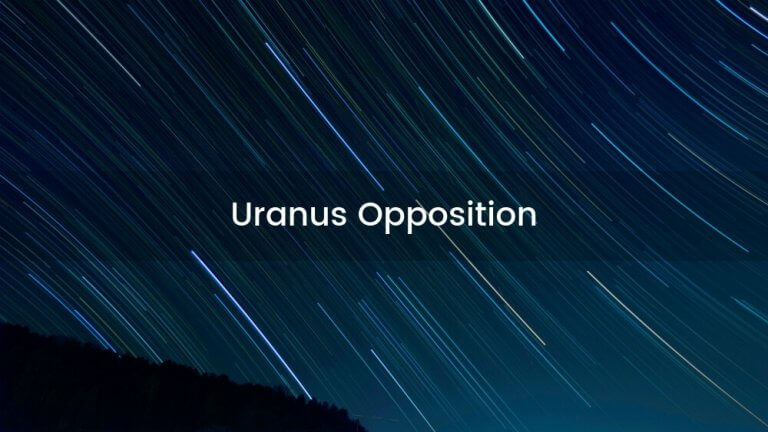 The Uranus Opposition (42 to 44) immediately follows the Neptune square Neptune; sometimes they overlap, depending on when you were born.  Pluto “upheaves”, Neptune “dissolves”, and Uranus “shocks”.  This period is one of the breakthroughs and sudden epiphanies.  Anything held back or suppressed is forcefully “blown open”.  Often the pattern of work for men is a “blowing open” of their heart chakra and for women a “blowing open” of their throat chakra (Barbara Hand Clow, Astrology and the Rise of Kundalini).

Uranus awakens, revolutionizes, and breaks through. In tarot, the 16th card of the Major Arcana, the Tower, nicely represents “Uranian” action by depicting a tower being blown apart by a lightning bolt.  Uranus can trigger sudden insight and deliver meaningful epiphanies in short order.  Unlike Neptune and Pluto, which dissolve and upheave respectively, Uranus “wastes no time” and its revelations can be quite jarring and arrive unexpectedly.  When Uranus is doing its work and you see it in the chart, the best you can be prepared is for … well … nothing, everything, and anything.

Uranus, like Neptune and Pluto, is a generational point and moves through a sign around 7 to 8 years consistently (unlike Pluto which may be in a sign as short as 17 years or as long as 31 years).  When Uranus transits a point it “asks” that point to “wake up!”, or it breaks up or through the energy, and cleanses, with electrifying energy, that which has become stagnant.  If we resist Uranus’ work we end up with anxiety, paranoia, and stress (mainly from trying to keep things the way they have always been).  This point is often a key marker regarding sudden shifts in personality and is commonly associated with the “midlife crisis”.

A Uranus transit is not subtle; it is direct and catalyzing in a shocking way.  Clients who see me during a Uranus transit are usually doing things they have never done before and “acting out”.  They are surprising themselves and everyone around them, or they are getting the “shock” of their lives.  These actions, reactions, and results are especially profound during major aspects in transit.  The major aspects include the conjunction (Uranus “on top of” another point), the square (Uranus 90 degrees from another point), and the opposition (Uranus 180 degrees from another point).

When Uranus conjuncts, it merges with the point in the same sign and house and, in essence, “charges” that point.  If Uranus squares a point then it brings growth through shock, like two different currents of energy exploding into each other.  And if Uranus opposes, then the awakening energy is designed to “shock in the right way” to restore equilibrium; think of the electric paddles used on someone whose heart has stopped.  This process is not forceful, like Pluto, or gentle like Neptune, but rather explosive.

As you can guess, when Uranus makes a hard aspect with itself, it “doubles down” on the “shock and awe”, the insight, the awakening, and the revolutionizing.  Only aspects with the Sun and Moon would compare in effect and intensity.  Because Uranus has a rather consistent orbit, the first square generally occurs around 21 and the opposition around 42.  In some charts, there can be overlap with the Neptune square Neptune that precedes it.  If so, changes can be more intense or dramatic.

You can begin by understanding your Uranus opposition generally by knowing which Uranus generation you are part of and which sign Uranus has to be in when it will oppose your generation’s Uranus.  My Uranus at birth was in Virgo, so it opposed for me and my cohort when it passed through Pisces between 2003 and 2010.  Generationally speaking, we all “got a shock” and a chance to awaken. This time period was really one rapid changes in technology, but also rapid changes in society.

It was during this time that we, as a group, probably realized that new world order was taking shape quickly in the form of global communication, travel, and trade; and the rapid arrival of a globalization world view.  New technologies emerged for the worldwide population, as did various forms of radicalism as the world-wide civilization began to truly accelerate (and started leaving groups of people behind).

At the more personal level, understanding your Uranus opposing Uranus means knowing what degree and in which house Uranus occupied on the day you were born.  In my case, Uranus was at 26 degrees and 05 minutes of Virgo, in my 11th House of Community, and it was retrograde.  Therefore, I experienced my Uranus opposing Uranus between May 2009 and March 2011 while it was moving through Pisces and my 5th House of Creativity.  At that time, in August 2009, I had a severe panic attack which shocked my system with intense tension that required several years to work out.

Pisces is spiritualizing energy and Uranus moving through my 5th House meant awakening and revolutionizing my sense of self and how I appear out in the world.  I went through what Barbara Hand Clow describes in her book Astrology and the Rising of Kundalini as a “forced Kundalini rising” for nearly three years, breaking through my heart chakra and opening it thoroughly. I found myself crying at dog food commercials and reacting emotionally in all sorts of unexpected ways at unexpected times.

Depending on the house transited and the sign of your natal Uranus, you may find yourself awakened and revolutionized in your intimate relationship or career or life goals.  You may break down to have a breakthrough. You will get blindsided and it will be like a hit from “out of nowhere”. To navigate this transit, you have to “get back up” after you have been knocked on your keister, get your hands up (for the next blow, which will come with the retrograde passing), and then “take your shot” on the following direct pass.

If you are reading this article “in front of” or “in the midst of” your Uranus opposing Uranus, then I would suggest you invest time in studying your natal Uranus, where Uranus will be when it opposes your natal Uranus, and what you are likely going to have to “pick up the pieces” from what will be broken.  If your interest in astrology is not on the research, but the result side, then I would recommend a professional reading with an experienced astrologer.  That could be me, or another professional.  If you are on the other side of your Uranus opposing Uranus, then look back at that time with this knowledge and see if a review yields any new insights that will help you now and in the future.