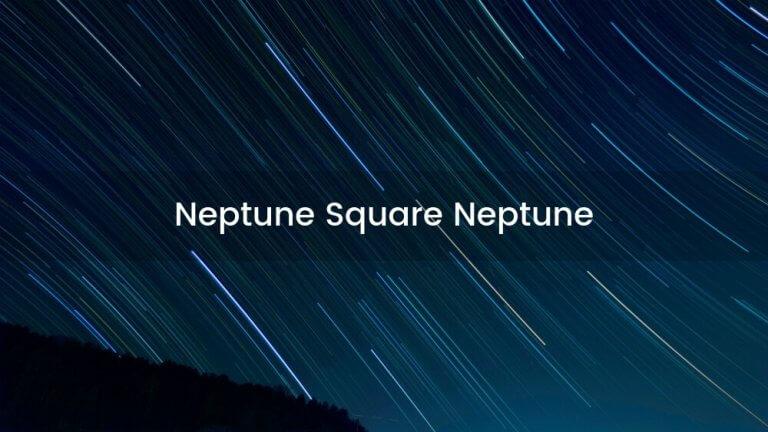 The Neptune square Neptune (40 to 42) transit takes place immediately after the Pluto square Pluto transit; sometimes they overlap, depending on when you were born.  I like to call this the “Fog of Life” transit.  After the upheaval work of Pluto, we can feel lost and confused, which is Neptune’s kind of work.  We are supposed to learn how to accept, surrender, and go with the flow of our spiritual journey.  Once again, good work done during the previous transits will make this one easier.  Work resisted makes each following transit work harder to shift you where you need to be shifted.

Neptune works to dissolve, mystify, and ultimately transcend. Rather like this clever joke: a wise old fish swims past two young fishes and says, “hey, how’s the water?”  The two young fishes are confused, but reply, “good.”  As they swim apart, one of the young fishes turns to the other and asks, “what’s water?” Spirituality and life purpose often function in the same way in human existence. Either people do not “see” it or “feel” it or “recognize” it or they reduce it to something more manageable and digestible, which is what you can get with fundamental religious beliefs.  Neptune cannot be reduced nor fully understood at all times, except perhaps for the rare, rare mystic.

Neptune, like Pluto and Uranus, is a generational point and moves through as sign around 14 years consistently (unlike Pluto which may be in a sign as short as 17 years or as long as 31 years).  When Neptune transits a point it “asks” that point to surrender in some way, or it dissolves the energy and washes away what is “loose” or in need of cleansing.  If we resist Neptune’s work we end up with delusion or disillusion, and confusion.  This point is often a key marker regarding health, and we can identify times of health struggle or change during and after a Neptune transit.

A Neptune transit is usually subtle, frustrating, confusing, and enlightening … all at the same time.  Clients who see me during a Neptune transit are usually feeling particularly “lost”, perhaps unmotivated, like they are “floating through” life, or their career, or their relationship.  The nature of the work will depend on the other point involved and the aspect of the transit.  The major aspects include the conjunction (Neptune “on top of” another point), the square (Neptune 90 degrees from another point), and the opposition (Neptune 180 degrees from another point).

When Neptune conjuncts, it merges with the point in the same sign and house and, in essence, “spiritualizes” that point.  If Neptune squares a point then it brings growth through loss or the need to surrender and have faith; it brings the challenge of faith.  And if Neptune opposes, then the dissolving and spiritualizing work is meant to take something in balance, subtly push it out of balance, thus creating “room” for a new balance to slide into place.  This process is not forceful, like Pluto, or “explosive” like Uranus, but rather gentle, but no less profound than the other outer planet work.

As you can guess, when Neptune makes a hard aspect with itself, it “doubles down” on the spirituality, confusion, enlightenment, and delusion.  Only aspects with the Sun and Moon would compare in effect and intensity.  Because Neptune has a rather consistent orbit, the first square generally occurs in the very late 30s (38/39) to early 40s (41/42).  For people born between 1960 and 2008, it will follow their Pluto square Pluto and precede our (all of us) Uranus opposition.  In some charts, there can be overlap with the Neptune square Neptune and the other two major transits.  If so, changes can be more intense or dramatic.

You can begin by understanding your Neptune square generally by knowing which Neptune generation you are part of and which sign Neptune has to be in and when it will square your generation’s Neptune.  My Neptune at birth was in Scorpio, so it squared for me and my cohort when it passed through Aquarius between 1998 and 2011.  Generationally speaking, we all felt “fogged up” and may have slowly realized that the beliefs and ideals of the world were taking a very different shape than the ones we entered into. This time period was really one of idealized hope and mass disillusion, summed up nicely in the US with the election of its first African-American President and the beginning and increasing dissolving of the middle class.

It was during this time that we, as a group, probably slowly came to realize that the lifestyle of our youth would have to be financed with debt, as would our education, and our homes.  Also, we saw in this period the wider impact of globalism through rising awareness of issues involving liquids, namely fresh water, oil, and pollution in the oceans.  With Neptune in Scorpio, this generation would be tied “spiritually” to the Plutonic (Scorpio) issues of regeneration, death/rebirth, elimination, and power.

At the more personal level, understanding your Neptune square Neptune means knowing what degree and in which house Neptune occupied on the day you were born.  In my case, Neptune was at 25 degrees and 59 minutes of Scorpio, in my 1st House of Identity, and it was retrograde.  Therefore, I experienced my Neptune square Neptune between April 2009 and November 2010 while it was moving through Aquarius and my 4th House of Family.  At that time, in August 2009, I had a severe panic attack which triggered a dissolving process of my inner self for nearly 3 years.

Aquarius is revolutionizing energy and Neptune moving through my 4th House meant a dissolving of my foundation.  I literally “lost myself” for nearly three years, needing psychological and, briefly, psychiatric counseling and drug therapy. It was, for me, many dark nights of the soul before re-emerging with a more profound sense of purpose.  Quite often we can experience a shamanic journey that leaves us unmoored and wandering in a fog.  During that period sometimes all we can do is follow Dori’s mantra (from Finding Nemo) and, “just keep swimming.”

Depending on the house transited and the sign of your natal Neptune, you may find yourself mired in questions about the nature of reality, and your place in this reality.  You may encounter a profound dis-ease that could show up as a significant health issue, whether mental or physical. There really is no forcing, fighting, resisting when Neptune is involved. To navigate this transit you have “go with the flow”, be open to all possible solutions, and willing to put your faith in others (psychological, social work, and/or spiritual healing practitioners) or higher powers/life and see where you are led by being willing to follow.

If you are reading this article “in front of” or “in the midst of” your Neptune square Neptune, then I would suggest you invest time in studying your natal Neptune, where Neptune will be when it squares your natal Neptune, and what you are likely going to have to surrender to, dissolve, and have faith in while the square is taking place.  If your interest in astrology is not on the research, but the result side, then I would recommend a professional reading with an experienced astrologer.  That could be me, or another professional.  If you are on the other side of your Neptune square Neptune, you can now look back at that time with this knowledge and see if a review yields any new insights that will help you now and in the future.

The Best Style of Home Based on Your Zodiac Sign