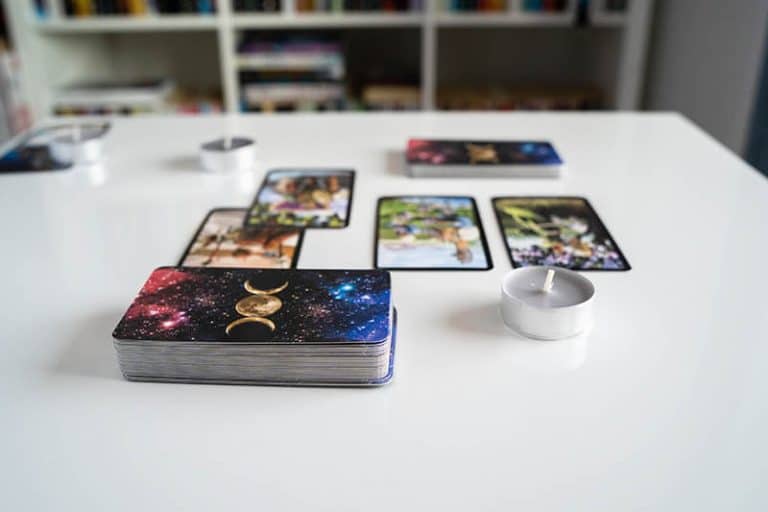 Tarot cards and, more recently, oracle cards are outstanding tools for psychological and spiritual work.  Each year they become more and more a part of the common vernacular and readily available in mass market venues, especially the online retailer, Amazon. The number of decks available in and out of print is mind-boggling, easily in the thousands, especially if you go do a search for decks on eBay.

Once shrouded in mystery and a “tool of people with questionable character, dark intentions, or acolytes of heathen beliefs”, tarot and oracle cards are enjoying widespread acceptance.  This article will explore the 5 must-have decks you need to study tarot.

You can choose to learn to read tarot cards on your own or with the help of a professional through tutoring.  Either way, you need to start by getting a tarot deck.  Choosing your deck can make the learning process easier or harder depending on the deck you select.  When a person asks to study with me and do my 6-session course, I explain to them the difference between an esoteric tarot deck and a visually accessible tarot deck.

An esoteric (intended for or likely to be understood by only a small number of people with a specialized knowledge or interest – Oxford dictionary) deck requires initiation and intense study to penetrate and unlock the secrets of the card meanings.  A visually accessible deck is pretty much “ready to go” right out of the box.  Not only are the visual designs easy to understand, but often these decks even have keywords on the card to make the meanings readily accessible.

But if you want to be a true scholar of tarot, then you would do well to own and study both esoteric and visually accessible decks.  There are two decks that essentially provide the foundation for most modern decks: the Rider-Waite Tarot and the Thoth Tarot.  Two of the most visually accessible and most modern decks include the Osho Zen Tarot and the Sun and Moon Tarot.  One of the most complex modern decks to own is the Haindl Tarot.  Study with these 5 decks and you will be well on your way to mastering tarot cards.

Perhaps the best known and most commonly purchased tarot deck is the Rider Waite Tarot.

The Rider-Waite tarot deck, originally published 1909, is the most popular tarot deck for tarot card reading. Other names for this deck include the Waite-Smith, Rider-Waite-Smith, or Rider tarot deck. The cards were drawn by illustrator Pamela Colman Smith from the instructions of academic and mystic A. E. Waite and were originally published by the Rider Company. The deck has been published in numerous editions and inspired a wide array of variants.

This is not a good beginner deck.  Unfortunately, most people who show an interest in tarot will either buy this deck or get it as a gift, quickly get frustrated, and usually give up trying to learn to read tarot cards.  To use this deck at a high level, you basically need to be a Renaissance scholar, which is not what most people want to be when they grow up.  Still, this deck is the inspiration for most modern renditions of tarot decks that are on the market today, even ones as “cute” as the Happy Tarot.

The best way to study with this deck if you want to learn to read tarot but not put in PhD level training to be a Renaissance scholar is to get this deck along with a modern one this deck inspired.  Open both packages and lay the cards out in matching order so you can see how the Rider-Waite deck inspired the modern deck.

Another deck widely known but hard to study and work with unless you are ready to put in PhD level training is the Thoth Tarot by Aleister Crowley and Lady Freida Harris.

The Thoth Tarot is a divinatory tarot deck painted by Lady Frieda Harris according to instructions from Aleister Crowley. Crowley referred to this deck as The Book of Thoth, and also wrote a 1944 book of that title intended for use with the deck. Crowley originally intended the Thoth deck to be a six-month project aimed at updating the traditional pictorial symbolism of the tarot. However, due to increased scope, the project eventually spanned five years, between 1938 and 1943 and both artists died before publication in 1969 by Ordo Templi Orientis.

Crowley made some significant changes to some of the names of the Major Arcana, including “going back” to the original sequence that has the number 8 card as Justice and the number 11 card as Strength.  One modern deck that adopts this sequence is the Law of Attraction Tarot.

This deck keeps the structure of the tarot – 78 cards with 22 Majors and 56 minors but breaks almost completely with the naming conventions of the Majors and the patriarchy of the court cards of the Minors.  All the cards are visually accessible and have keywords.  This is a fantastic starter deck because you really can open the cards and start reading them.

Published in 1994 and subtitled “The Transcendental Game of Zen”, this deck is fun to layout as the third row of cards under the first row of the Rider Waite Tarot and the second row of the Thoth Tarot.  Additionally, the deck includes a 79th card, The Master, which “oversees” the deck and represents the goal of each soul living … to master life.  Also, this deck removes the classic symbols for the suits (Cups/Water, Swords/Air, Wands/Fire, and Pentacles/Earth) and replaces them with just colors for the elements (Blue/Water, Grey/Air, Red/Fire, and Rainbow/Earth).

The Sun and Moon Tarot

After you own the Rider Waite, Thoth, and Osho Zen tarots, there are many modern decks to choose from that can match your interests and your artistic sense of style.  This deck happens to be one of my favorites and one I use professionally with new clients or out in public when doing an event.  The art style is simple, and the Minor Arcana cards have keywords.  Also, this deck mimics the Thoth Tarot with regard to the sequence for the Justice and Strength card and uses Princess and Prince for the Page and Knight.

This deck is truly an advanced modern deck.  While it does follow the Rider Waite tarot sequence with Strength at number 8 and Justice at number 11, it changes the court cards to Daughter, Son, Mother, Father instead of Page, Knight, Queen, King, or Princess, Prince, Queen, King.  The artwork is complex and the creator, Hermann Haindl, includes symbols from the I-Ching (hexagrams), Runes, astrology, and the Hebrew alphabet.  The court cards represent different regions of the world: Wand/East/India, Cups/North/Celtic, and Nordic, Swords/South/Egypt, and Stones/West/Native America.

If you begin your studies with these 5 decks in your collection, you can quickly appreciate and learn the complexity of tarot cards and give yourself a tremendous start to learning to read the cards for yourself and others.