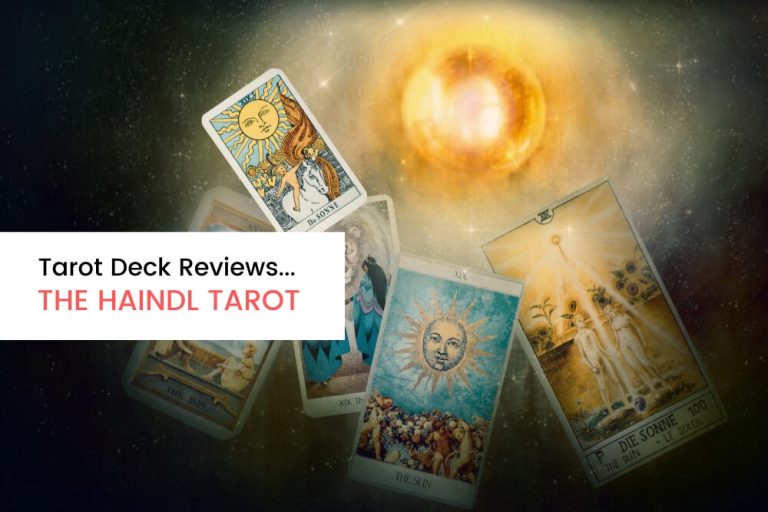 Tarot and Oracle Decks have exploded into the common experience since the 1990s. Today there are literally thousands of decks to choose from, including out-of-print decks and published ones. Reviewing a deck involves subjective judgment based on various critical criteria.

The critical review of a deck involves looking at the quality and size of the cards, visual accessibility of the art, quality of the companion text of the deck, and potential usefulness in professional practice. This month I have chosen to review The Haindl Tarot by Hermann Haindl.

The Haindl Tarot deck was published in 2011 by US Games Systems. It comes with a booklet.  However, tarot expert Rachel Pollack wrote two books on this tarot deck, one about the minor arcana and the other about the major arcana.

From the back cover of The Haindl Tarot: The Major Arcana by Rachel Pollack:

The Haindl Tarot is a rare mix of high art, Tarot esoteric tradition, and worldwide spirituality.  Its striking beauty and deep tradition have already made it one of the most popular and respected decks of the modern Tarot tradition.

The 22 Major Arcana cards, which are covered in this book, are lush and powerful as they portray Haindl’s great lesson of dedication to the Earth.  Each card contains symbols from astrology, the Kabbalah, and the Germanic Runes.

From the back cover of The Haindl Tarot: The Minor Arcana by Rachel Pollack:

The Minor Arcana actually consists of two parts, the numbered cards in each suit – Ace through 10 – and four “Court” cards.  In Tarot tradition, these are King, Queen, Knight, and page.  Haindl has changed these to Mother, Father, Daughter, and Son, and has used these cards to represent a panorama of the Gods and Goddesses from different cultures.

The card stock for the publication of the deck very good and holds up well to repeated use over time.  The cards are larger than a regular deck of playing cards, but not so large that they are difficult to shuffle.  They are not stiff and shuffle easily right out of the package.

The visual accessibility of the deck is somewhat mixed; without the keywords, the cards that make up the suits would be just a collection of objects: 2 stones, 4 spears (wands), 9 cups, or 6 swords.  The objects are laid out in certain patterns, which helps somewhat visually with the keyword, but is nowhere near as accessible as, say, the cards in the Osho Zen Tarot.

For example, the 4 of Cups has cups tilted in such a way that the open end is facing toward each cup in a pair, and the keywords are Mixed Happiness.  But without those words, you would have really nothing to go on visually to make this interpretation. 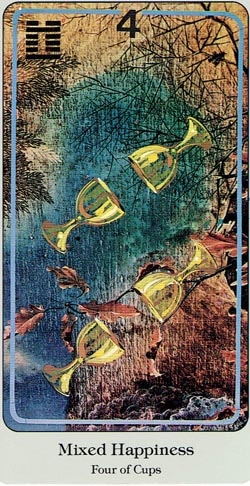 Once you know the intended meaning you can do much more with interpretation.  The fall leaves and the transition to winter (the changing of the season) indicate the mix of difficulty and blessing that comes with each seasonal and significant emotional change.

The Major Arcana cards are much more visually accessible, using common visuals like the four minor arcana symbols (sword, cup, spear, stone), indicating that the Magician has access to all the different energies of the suits when he encounters a problem and needs to search for a resolution. 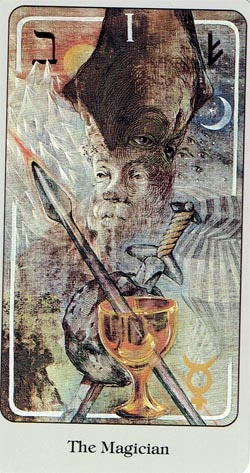 The “Court” cards are also much more visually accessible since they draw from four different mythologies.  The Son of Swords in the South is Osiris, a god of fertility, the afterlife, and resurrection.  Knowing the various mythologies – Swords (Egypt), Wands (India), Cups (Europe), and Stones (Native American), makes it easier to interpret these cards just on the visual cues.

The booklet is limited, but Rachel Pollack’s two books, one on the Major Arcana and one on the Minor Arcana are both excellent.  She explains the many additional symbols which appear on the cards, including the Hebrew letters, Runes, astrology symbols, and I-Ching hexagrams.

The Magician’s Hebrew letter is Beth, “House”; the Rune is Peoh, “Cattle”.  The astrology symbol is the planet Mercury and the element is air.  The house is a human creation and the Magician is an inventor.  The Bible begins with the letter Beth, and the first sentence, “let there be light”, brings order from chaos. Mercury is the planet of communication in your birth chart and air rules the mind, cleverness, and ingenuity (The Major Arcana, 43).

For the 4 of Cups, the hexagram is Chun, “Difficulty at the Beginning”.  If you reverse the card, the hexagram becomes Meng, “Youthful Folly”.  Starting out with only partial knowledge, or more hope than sense will usually lead to mixed happiness until you get your feet under you.  When you reverse the card, you also connect with the 7 of Cups, which has Meng upright.

With so many additional symbols and threads packed into the entire deck, this is not an easy deck to learn and master, but it is certainly one of the most powerful.

As a professional reader who started reading cards for pay in 1992, I can say that this deck does work well in public because the images are visually stunning, and the keywords convey ideas clearly.  Clients often remember the message because the cards are so eye-catching.  The visual strength of the art leaves a lasting impression on the client with each reading.

It is one of my top 25 “go-to” decks for public readings where there is a good understanding of tarot. In a setting where people are there more for “fun” than seriousness, this is not a deck I use.  I rotate two decks at a time in my public practice, while I have the other 23 on display in my office for clients to pick from when they come to me for an in-person reading.  The deck is a good choice for first-time private readings or an esoteric event/expo.

The deck is NOT an “open-ready-go!” kind of deck, which makes it a very challenging deck for a new reader.  You will have to put an intense study in if you are considering this deck to be your first deck.

I will give this deck the highest rating.  I consider it one of my top 20 decks, but outside my top 10 for public readings.  It is in my top 10 for personal and private use.  I keep the cards in a beautiful hand-crafted wooden box.

As a professional, I do enjoy reading with the deck, and can recommend it as an essential deck for someone with the reading experience, but not for a novice. If you are a tarot and oracle card collector, then this is certainly a deck you need to have in your collection.