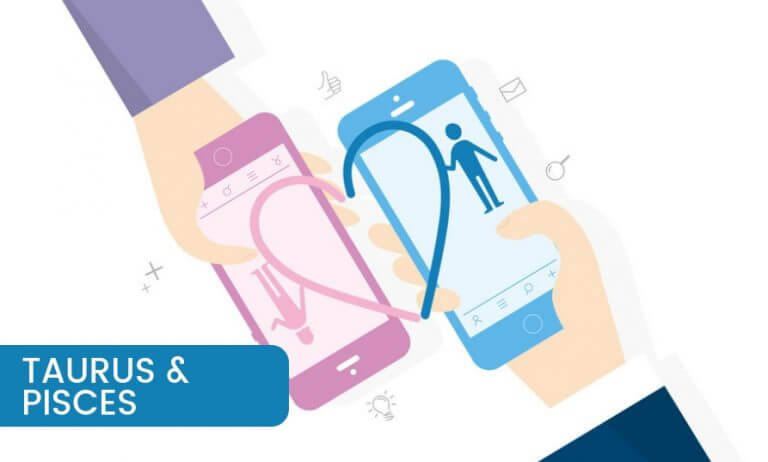 Pisces is a water sign, and Taurus is an earth sign, and a blend of the water and earth elements can lead to powerful, long-lasting unions. The Taurus can sense what the Pisces needs in terms of stability in their life, and the Taurus will provide it to them.

The Pisces can sense the sensual attention and love the Taurus dearly needs but does not know how to ask for it, and will also provide this to them. The Pisces can make the Taurus feel like they are in a dream world, which will be a much-appreciated change to the Taurus’s serious life, who tends to be overly present in reality and extremely concerned with facts and money.

Upon meeting, the Taurus will think that the Pisces is loose headed and foolish. The Taurus cannot understand how another person can not think about the realities of life, and how they can just live in the moment. Taurus will attempt to bring the Pisces back to reality by pointing out elements of practical reality to the Pisces, and the Pisces will appreciate this as these are elements they have not seen or considered before. The Taurus will be one of the few signs who will have the patience and perseverance to deal with the loose headed nature of the Pisces.

The initial attraction between these two will be strong, with a sense of mystery and curiosity coming from both sides. They are so different from each other that they are instantly fascinated and attracted by these differences. Pisces has an incredibly romantic and compassionate nature, and this will sweep the Taurus off their feet! Taurus is ruled by Venus, the planet of beauty, love, and harmony, so your average Taurus loves love, they just dont want to admit it to anyone!

Zodiac Compatibility: When the Archetypes Collide

The Pisces will initially see the Taurus as an overly serious, grouchy money-hungry individual who they can’t relate to at all, as Pisces is not a big fan of money. Pisces initially sees the determination and perseverance of the Taurus as a selfish, greedy trait; however, over time, the Pisces comes to realize the Taurus just knows exactly what it is they want, whereas the Pisces doesn’t. Making money and working is not something Pisces is good at; however, Taurus can help Pisces become more focused in life and work towards a higher goal, and the Taurus can even help the Pisces identify their goals!

Taurus is usually more closed off and reserved, where Pisces does not shy away from opening up to others. Taurus will feel that they can be their authentic selves around the Pisces and that the Pisces does not judge them. Sexually, the Pisces will know precisely how to get the Taurus to come out of their shell and experiment more in the bedroom!

The Pros of a Taurus and Pisces Relationship

The Taurus will be the one in charge in this relationship, and the Pisces will just go with what the Taurus wants. The Taurus will plan the monthly budget, decide what to eat for dinner, how the house should be decorated, where they go on holidays, etc., and the Pisces won’t mind just falling in with the Taurus’s plans, as Pisces prefers to go with the flow and likes it when there is someone else in charge.

Pisces can teach Taurus to become more giving to others, less serious, and more compassionate. Neptune rules Pisces, and Taurus is ruled by Venus, which are both feminine planets. There will be endless amounts of compassion and understanding in this relationship, as both these signs function via a more caring nature with love in their hearts. These two signs generally just want what is best for others and their loved ones.

The Cons of a Taurus and Pisces Relationship

The main difference between Taurus and Pisces is how they see money and how they apply value to things. Taurus will not waste a cent, and they make use of everything around them and believe everything has a purpose and a function. Pisces, on the other hand, does not mind giving money away, especially to charity, and they do not see the point of holding onto cash and saving it, such as in the case of the Taurus. Pisces also doesn’t care too much about material objects. If something breaks or they lose it, Pisces doesn’t care, whereas the Taurus, on the other hand, takes the material objects around them very seriously and is sentimental about it.

The biggest con in this combination is finding a middle ground between stability and structure in their lives, and fun and adventure. The Pisces lacks a serious-minded approach and tends to forget about the more critical things in life, which can infuriate the Taurus. The Taurus can feel like they always have to be the responsible one, and they have to be the one that thinks of all the essential things while Pisces just lays back and relaxes and gets everything on a silver platter.

The Pisces woman usually lacks stability and direction in life, and this can make the Taurus man worry about her. He will be so concerned that he will likely end up providing her with the resources she needs to survive. Over time, he will realize she might not be the best money-making machine out there. Still, she has a heart filled with the most love and compassion that he has ever seen, and he will realize that it is in her love and compassion that her strengths lie, and not in her ability to be a provider or make money.

The Taurus woman will be more serious-minded and collected than the Pisces man, and will likely earn way more money than what he does. Taurus women dont mess around, and they need to know their partner is in it for the long haul, like they are. Initially, the Taurus woman will not take the Pisces man seriously, and the Pisces man can get put off by her needing too much security and commitment, and her over seriousness at times. Where they will find mutual harmony is in their need for seclusion, peace, and quiet.

When they get the chance to be alone, they will want to be alone together forever and will not care about the rest of the world. The Pisces man will appreciate the serious nature of the Taurus woman over time, as he will realize she can provide him with many answers he needs to get onto the path he needs to in life. Taurus women can be incredibly sensual and loving, more so than any other zodiac signs, and Pisces will be extremely attracted to how much love and affection he can get from the Taurus woman. At the same time, the Taurus woman will overlook his annoying habits and quirks, instead of making him feel bad, and he will love her for it. The Pisces man will bring a touch of fantasy and fun to the overly serious Taurus woman’s life.

Pisces know that you can be wealthy and have millions in the bank, yet still, be unhappy and unsatisfied with life, and that is why they do not chase riches. This is something that Pisces can also teach Taurus, that you do not need to be extremely wealthy to be happy, and you can actually have very little and be happy as well. The Taurus can struggle to trust the Pisces with more serious matters, as the Taurus knows that the Pisces doesn’t take things as seriously as they do themselves. Due to this, the Taurus will prefer to make all the decisions and be the one in charge of the relationship.

Pisces will bring a sense of adventure, fun, and spontaneity to the life of the Taurus. A Taurus life can be very dull unless they have someone in it to pull them out of their rocky, earth cave and explore the world and all the adventures it has to offer. There will be plenty of communication in this relationship! Pisces knows how to communicate with the Taurus to get them to try new, more risky things! Pisces possesses the power of persuasion, and will be able to persuade the Taurus onto doing many things they would never think of doing! Taurus can sometimes close themselves off when they are in disagreement with Pisces, however, the silent treatment towards Pisces will only last for a couple of minutes or hours.

Pisces is a water sign that prefers to go with the flow of life, and they do not have a set structure or routine they live by. Pisces prefers to rely on their intuition and gut feeling. This is very different from the earth sign, Taurus, that needs structure and stability to function, and they rely on practicality and logic. The inherent natures of these two signs are very different, yet they can make up for the qualities that the other lacks in each other. Taurus can bring more stability and structure to the chaotic life of the Pisces, and the Pisces can bring some spontaneity and adventure to the Taurus’s life. Their inherent values and beliefs will be different, yet this does not cause issues in this relationship as the one partner can make up for the qualities that the other lacks, leading to a well-balanced relationship.

Taurus represents the material world, and accumulating material resources. Pisces represents letting go, and it also represents the afterlife, so in essence, Pisces has no desire to be attached to any physical objects. Pisces will be more generous and giving, and Taurus will be more frugal and stingy, and that is where the main differences between these two come in. The traits and interests they share is always wanting to create a sense of compassion and understanding in their interactions with others. Neither Pisces nor Taurus intentionally wishes to cause harm to others, and they just want to experience beauty and love around them. Pisces and Taurus share the same vision for a beautiful world, and together they will aim to create a beautiful world around them.

Taurus and Pisces Compatibility
COMPATIBILITY SCORE OVERVIEW
This is an indicative score from other readers. For a more accurate match, it is necessary to do a synastry compatibility calculation.
What percent do they match?160 Votes
70
Pros
Balanced life
Intrigue each other
Strong adoration
Cons
May lack understanding
Do not talk much
May lose touch with themselves
70