10 Reasons Why it is Hard to Love a Pisces 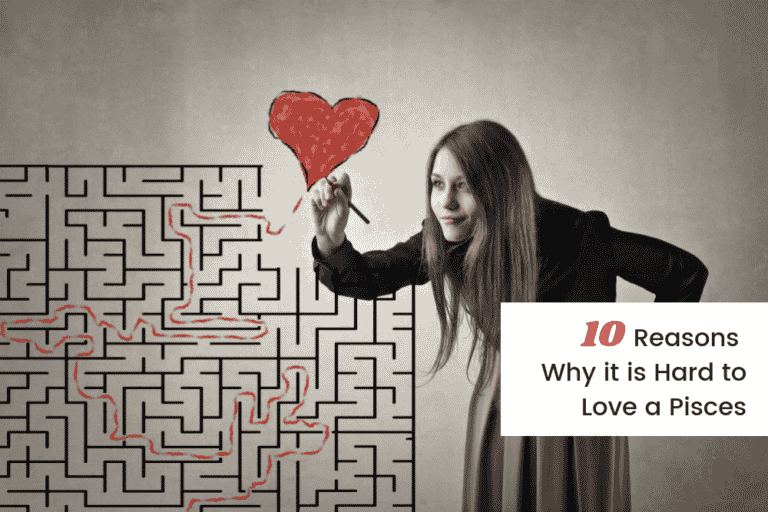 Feeling the elements of love in one’s heart changes their perception of the world. Things move from one place to another but what remains in the heart is sheer love. Standing there watching yourself giving one hundred percent but instead getting nothing in return cripples one’s hope for love.

The imaginative and timid behavior of Pisces is well known. This inhibits them from being connected to someone on a personal level, and that is what makes it very hard for them to be loved and adored.

Find out why it is hard to Love a Pisces.

Pisces is a star that loves to escape into the world of imagination and relief where there is no pain or sorrow. They would stay in that realm of imagination from time to time until it becomes a permanent home for them.

Now for someone who wants to Love Pisces, it becomes hard for them to stay attached to them for a long time as they might not share the same mindset. A time comes when the effort to stay with them seems futile and may drift away slowly.

2nd Reason: Keeping to themselves

Living in a world of wonders Pisces loves to connect to other people forging new relationships, but the mindset of being ridiculed by people makes them extremely vulnerable to self-consciousness.

This greatly diminishes the Pisces Love life to a point where there is no return. Pushing this star to move further into the world of imagination because they find it hard to pour out their feelings.

3rd Reason: Afraid of the world

Pisces love to connect, but when they realize the true hardships of this world, they seem to drift off much more often into the area where they stay to themselves and try to recoil from the events taking place around them.

The constant zoning out and staying alone leaves their loved ones to take their hands away from them.

Being the type of person who loves to stay alone for fear of being ridiculed, Pisces becomes a naturally independent person who would like to solve their issues by themselves.

This makes them susceptible to loneliness as no one would want to patch up with them because they would neither give them the time nor the effort that they need to stay connected among themselves.

5th Reason: Scared of being hurt

To Love Pisces, one must realize that they are awfully emotional. They love to communicate with other people, but it becomes hard as their feelings come into play.

Having a soft heart makes them awfully hurt if they are not receiving the treatment that they think they should be getting. A natural instinct of running away is instilled in the mind of Pisces when such a situation arises.

Following a Pisces and trying to communicate with them can end up in a sour experience. Possessing the character trait of having a deep soul, Pisces becomes one of the most mysterious zodiac signs of all.

If one does try to establish a link with a Pisces, he or she may end up getting lost in the web of the street that populates a Pisces’ heart. Where finding your way might become arduous as there are so many paths and only one is to be followed.

In this world of speed, it turns out to be a quality that is looked down upon and hated by many because no one wants to invest much effort and time in such a turbulent relationship.

Possessing a soft heart and a beautiful soul that does not want to hurt anyone. Living in a world of imagination they believe that true love exists in this world and that a time may come when they would experience one.

But the fact that they choose to ignore is that they must be able to communicate their feelings to others for achieving what they hope to achieve, that is true love.

To love a Pisces with true zeal and zest can become very hard as they do not tend to open up to anyone. They turtle up in their own shells and observe from the darkness within.

From living a caged-up life, even if they do get into a relationship, Pisces would want to take control of their partners just for the sake of saving themselves from getting hurt, which is one of their biggest fears.

The fact that they are being controlled can scare anyone and especially a relationship can get very hurt if the lines are not followed through properly as no one ever hopes to be manipulated against their will.

Moods can affect someone’s life more than they realize it to be. A sudden change in mood may incur a complete change in the way people talk to other people, and this may turn to the bad side as well.

Pisces may seem calm and independent, but they are one of the highest-rated moody people. Because their moods can swing depending on their setting and may hurt the people around them.

Having a soft heart, Pisces want their partners to stay with them completely as they do not like to share. It is in their character traits that they want to keep their partners to themselves. This is not in a negative manner but in fact, this depicts the sheer love they have for their partners.

Possessing a soft heart, is extremely sensitive, and always living in a world of imagination make the Pisces difficult to be understood by anyone and it becomes hard for their partners to stay with them for a long time. To love a Pisces, the idea of being manipulated must be kept in mind.